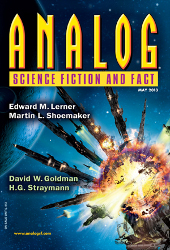 With this issue, Analog’s new editor, Trevor Quachri, is settling in to his new position. His editorial style seems to be much like his predecessor, Stanley Schmidt’s. I am hopeful that what I have come to expect from Analog will continue under Quachri’s stewardship.

This month there are only four short stories and a novelette since much of the issue is taken up by Part II of a novel by Edward M. Lerner.

The novelette is “Not Close Enough” by Martin L. Shoemaker. It takes place in a spaceship orbiting Mars. NASA has decided that tele-operations from the orbiting mother ship will land unmanned crafts on Mars. The astronauts aboard the mother ship do not like the idea. Commander Benjamin Cooper must accomplish the missions with drones while keeping the astronauts happy. Of course, things do not go according to plan. An individual astronaut decides to modify a drone to land on the surface herself which results in a crisis situation. Commander Cooper must then creatively solve the problem. It is a satisfactory story but without much new to say or surprise in the narrative.

The short stories include: “Enjoy the Fishing” by Walter F. Cuirle – an author I was unaware of until reading this tale. And it is a tale–one of the fish that got away variety as seen through a science fictional lens. An agent for a wealthy client discovers some truths about the fishing on a planet that is being opened to developers. There was a sense of Clifford D. Simak’s pastoral settings with the alien bubbling underneath that I appreciated.

“Geospermia” by Patty Jansen concerns the hardscrabble life on a future Mars where people disagree about the basic way of terraforming that world. The concept of two competing ideas affecting one world, (and one farmer in particular) creates tension. This is another story that I was glad to have read, but there was little complexity.

“Prometheus” is by long-time Analog writer H.G. Stratmann. This story begins on Earth 400,000 years ago. It is an interesting idea story that I found, somehow, hard to believe. A very advanced dolphin culture contacts proto-humans by introducing the existence of fire. How this is possible is too facilely communicated within a dolphin society that is suspiciously not truly alien enough.

The final story of the issue is by Donald W. Goldman. “Sentinel Chickens” has an interesting central premise about fads being seen as epidemics.  However, that premise is undermined by the style of the story. This is an exchange of info-dumps by two scientists. The work they are doing as they talk creates some irony and the final clue to what is really going on in the story. This is an interesting idea with a nice sting but underwritten for my tastes.

Analog’s regular readers will enjoy the variety of ideas put forth in this issue. I, however, missed the complexity of the best stories that have been published in this magazine in the past.