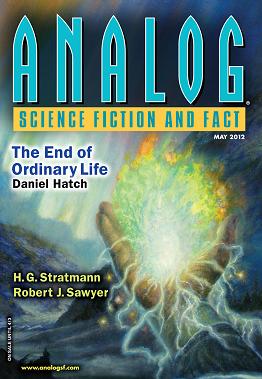 Analog, Science Fiction and Fact, May 2012

“The End Of Ordinary Life” by Daniel Hatch
“But It Won’t Set You Free” by Tracy Canfield
“Lobstersaurus” by Eric James Stone
Triggers by Robert J. Sawyer (Part IV of IV, not reviewed)

“The End Of Ordinary Life” by Daniel Hatch

“… this is a story that goes so far beyond the ordinary […] it really has to start with Clayton E. Shaw and the night he met the alien.”

Thomas O’Reilly is a bush pilot: one of few who can navigate the dramatic terrain and dangerous weather patterns of southern Alaska. Yet despite the hydrogen fuel cell in his modified Piper Cub, keeping his plane in the sky is getting riskier. It is the Age of Dirty Electricity, and the economy is on its knees; a job is a job in times like these, even if it means illicit cargoes, or illegal trips across the border. When Thomas notices his friends beginning to disappear, his investigation brings him to Clayton E. Shaw, and the end of his ordinary life.

Hatch’s piece is an incredibly detailed portrayal of a near-future Alaska, in which our present day economic troubles have gone unsolved. It has a promising start, but the plot gets hijacked somewhat by a didactic commentary on the virtues of ‘clean energy’, and on the evils of banks, corporations, governments, etc. Hatch seems to be making a prediction for our future, should society fail to change its ways, yet his scattergun attack on all things ‘capitalist’ often overrides the story. Put simply, when the piece opens with an alien, you expect to read a story about an alien, not a treatise on socioeconomics, and this may frustrate some readers.

Nevertheless, the story world is picked out in loving detail. I was impressed by the feeling of space that Hatch creates, but the effort put into describing Alaska became overbearing at times; for a piece that claims ‘[the story] must start with Clayton E. Shaw’, it takes 15 pages to get there. Equally, Thomas can be a difficult character to empathise with (his reaction to ‘the extraordinary’ falls a bit flat, and an awkward subplot about juggling four girlfriends paints him as a rather oblivious lothario). Hatch gives us moments of tension and intrigue with helicopter chases, corruption, and of course the alien… But, for a piece that makes such grand promises at the start, it is really quite inoffensive throughout. This piece is indeed about the end of the ordinary, but I wish it had dipped its toes in the extraordinary with a little more conviction.

“But It Won’t Set You Free” by Tracy Canfield

Tracy Canfield’s piece is “a cautionary tale for all Seekers of Truth.” In orbit around the planet Alepou, Harvinder Pawera and Kim are on a mission for Contact. Their task is simple: to identify and study the sentient species of the planet without being discovered. After all, nobody wants another disaster like the Ukupanipo first contact.

“But It Won’t Set You Free” is a classic bit of science fiction, from the AI computer THOTH that runs their FTL-capable ship (and does all the hard work of translating alien languages, etc), to the nanites that build and destroy equipment as needed. Even casual readers will feel right at home in this environment, and it was nice to see humanity painted as the ‘technologically advanced aliens’ for once. The title and the ‘cautionary tale’ tagline suggest that this piece will be dark and gritty, but it is actually quite lighthearted. Harvinder and Kim are endearing characters, because you can’t help but feel sorry for them. One little misunderstanding is all it takes to send their situation spiraling out of control, and with the stigma of Ukupanipo looming over them from the start, the string of little disasters that befalls them becomes quite entertaining; never has a character tempted fate more openly than Harvinder, for example, with that fatal line, “he’s the only one who’ll remember seeing us. And he’s probably no one important.”

There is absolutely nothing innovative or new about this piece, but it is solid and entertaining. Some may find the characters a little too cutesy with lines like “chalk up one more for the great mouse detectives,” but I felt the balance of tone and humour worked well. A good, well-rounded story.

Species C-3506, or ‘lobstersaurus’ to the Kallisto colonists, is their planet’s biggest hazard. Impervious to conventional weapons, the only way to kill one is by taping a few pounds of blastique to its exoskeleton, and with its giant razor-sharp pincers to get past, who wants to get that close? This is the dilemma faced by Esperanza Vega and her family, when a fully-grown lobstersaurus wanders into their back garden.

Stone’s piece falls into what I can only call the ‘girl-keeps-absurd-pet’ genre. You know where this story is going from the moment little Esperanza turns gooey-eyed at the adorable lobstersaurus, and I found it more than a little frustrating to watch as her parents failed to do the responsible thing. If you can get past that, this story will fill some time in an afternoon, but its plot twist comes as no surprise to anyone. The short-sightedness of the characters here is mind-boggling, and ultimately that proved too much for me to overcome. I suspect that this will be the case for many other readers, and it is a shame, because the story universe itself is quite well imagined. Snippets of a colonisation report punctuate the story, and I think Stone’s world held more promise than “Lobstersaurus” delivered.