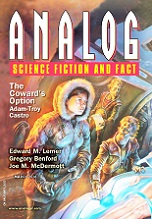 It’s a hard lonely life as a traveling salesman. In Thomas R. Dolski’s “Drummer,” it’s arguably much worse as a salesman in space. Dale Maygan knows all about that. He’s been drumming for years and has nothing but a good sales record to show for it. The universe is full of both buyers and sellers, and when Maygan happens across a young drummer named Barclimas Tragg peddling bogus miracle cures, something tells him he’s not the latter. That chance meeting however will stick with Maygan as he travels the galaxy with increasing longing for a home he doesn’t have. It won’t be the last time he crosses paths with Tragg, and it certainly won’t be the most bizarre.

Dolski writes a fantastic world that manages to be completely alien at the same time that it is unmistakably familiar. While at times the events described are mundane and without much character interaction, the first person point of view and the strong voice that goes with it keeps the reader rooted in the story and waiting for the punch to come at the end. What the conclusion of “Drummer” means is largely left to reader interpretation. There’s a case to be made for the plight of those suffering from personality disorders and other forms of mental illness, but there’s a broader commentary as well on the loneliness of being human, and how we each individually seek to fulfill our social needs. Whether a reader chooses to look for deeper meaning in the story or simply read it as it is presented, it is worth the time invested in it.

In the not so distant future of Gregory Benford’s “Elderjoy” the government has finally found a way to tax sex. Not all sex, that would be ridiculous, but elderly sex that can theoretically tax an aging body to the point of health risk and therefore financial burden on the nation. But for one couple with a healthy libido well into their golden years, this new tax is just too much. Together with some clever science and marketing, they’ll propel themselves to wealth and fame—and freedom between the sheets.

This short, futuristic narrative explores with humor some of the pitfalls society is driving toward. With life expectancy climbing right along with global population, and health care extending the number of fulfilling years we can expect to enjoy, the issue of taxes and elderly recreation will be an issue future governments will struggle with, especially as demographics in industrial countries begin to tilt more toward an aging population. Benford lays out his ideas in expositional dialogue that might lose reader interest if not for the little slips of humor tucked in. At times the banter between the characters makes it hard to visualize them as seniors and it does take some reader effort to remain in the story. Whether or not the ideas expressed in the story are plausible will depend on the individual politics of the readers, though the idea of the freedom of enjoyment in recreational activities without government monitoring, regardless of age, will resonate with all audiences.

Having snowbirds stop at her family’s orchard is nothing new to Mary Margaret. They migrate annually to the farm to purchase jams and fruit before carrying on their way. However in Joe M. McDermott’s “Snowbird,” when one of the chrome, self-sufficient RVs parks itself in the lot, completely out of season and no occupant makes itself known, a mystery springs up at the orchard. Before long another unresponsive snowbird arrives, and the news begins tracking hundreds more on their way. Suddenly the threat of emergent AI has Mary Margaret scrambling to come up with a way to disperse their unwanted visitors, before the government steps in and indiscriminately tears the place up.

McDermott writes a lovely bitter-sweet tale in “Snowbird,” about freedom and self-determination, and what is the right or wrong choice in the face of difficult moral decisions. Told with an authentic voice that pulls the reader deeper into the world, and full of small, untold details that keep the reader speculating nearly from beginning to end, “Snowbirds” is a highly enjoyable read. Each separate arc of the narrative gives strength to the overall theme, and concludes with the open-ended question, “Was it all right?” Perhaps the reader will come away with a more definitive answer for that question in one or more plot threads, but it is most certainly asked of the reader to consider it carefully.

Life has shaped Andrea Cort into a hard, cynical woman in Adam-Troy Castro’s “The Coward’s Option.” As a prosecutor for the Confederacy, Cort realizes the supreme irony of punishing criminals while dragging the burden of her own past behind her. Griff Varrick’s case is no different. A confessed murderer, Varrick has been sentenced to death by Caithiriin’s brutal version of capital punishment. Varrick isn’t going to go down without one last fight, however. Somehow he’s learned of an alternate punishment—a punishment so heinous that Cort can’t afford to let its knowledge escape Caithiriin’s tiny influence.

“The Coward’s Option” has a bit of a slow start. Lengthy complicated sentences coupled with fresh characters and a new world move readers along at a gradual pace for the first couple pages. Once readers become more familiar with the style and the substance however, the narrative picks up and readers are propelled along by an exciting science fiction mystery filled with dubious ethics, double crosses, and painful moral quandaries. The ending is sharp and incredibly satisfying and does a great job of tying up all the loose threads while still leaving the reader with a little something left over to ponder on their own.

No one can predict a perfect March Maddess bracket. It’s humanly impossible. So when John Peoples manages to do just that and win himself a cool five hundred million in the process, Richard Mann knows something is up. While investigating the shady circumstances, Mann is forced to eliminate all possible insider tips and mundane cheating tricks, leaving him with only one possible alternative: time travel. Yet when he confronts Peoples in his hotel room, determined to get the truth, Mann will discover that the truth is far more complicated—and far more dangerous—than he ever expected.

Howard Hendrix and Art Holcomb have built a very playful narrative around statistics, quantum physics and college basketball. With pieces of a spy thriller or a PI story woven in, the reader is treated to complicated scientific speculation coupled with an exciting, well-paced story. The recombination of all these elements is what makes an otherwise tired narrative trope fresh and alive again. “The Perfect Bracket” offers readers who might not have a working knowledge of college sports gambling or quantum theory just enough exposition to not become completely lost in the premise, without sacrificing any of the momentum at the tail end of a good detective story.

Eric Del Carlo’s “Unlinkage” begins with ex-soldier Etta Pryor experiencing an unusual, startling, invisible attack. She doesn’t know what exactly has forced her to the ground in a series of painless blows, but she has an idea that it has something to do with her military career and the strange, never again repeated experiments she and her fellow soldiers underwent. After an episode puts her daughter in danger, Etta reconnects with a fellow from her old unit to unravel the mystery and perhaps find a piece of her past she thought had died years ago.

For a novelette, “Unlinkage” only feels half as long as it actually is, speaking to the strength of its narrative delivery in keeping the reader fully engaged in the story. Etta’s situation, coupled with the backstory inserts from her past, are both unusual enough and realistic enough to pull the reader along with equal parts easy understanding and interesting story. “Unlinkage” is a solid piece of science fiction for anyone with an interest in futuristic military bioweaponry and the potential ramifications of that technology.