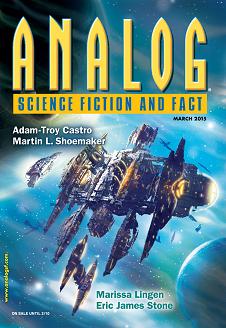 This issue of Analog features a mix of tales dealing largely with politics in many forms: ecology, colonialism, intrigue, genocide, terrorism, and the future of the workplace. Ironically, though, the political exploration engaged in by some of these stories, doesn’t, to my mind, penetrate deeply enough into the topics under consideration. The real strength of this issue lies in the stories that eschew politics altogether and deal, often in a very humorous or touching way, with core parts of the human condition: love, childhood, and the often simple and funny answers to complex scientific questions.

In “Tasha’s Fail-Safe,” Adam-Troy Castro presents a bleak tale about bleak people in a bleak future: Tasha Coombs and Andrea Cort. At the beginning of the story, Tasha Coombs, who works to ferret out spies for Dip Corps, stands a good chance of being murdered by the mole she attempts to unearth. She survives an attack but is rendered comatose or “teemed.” Her former colleague—I hate to use the word friend—Andrea Cort, who is under house arrest, enters the picture to work to identify the attacking mole, offer a deal, and redeem herself. With an interesting interrogation scene, this tale concerns broken people in a time in which trust is fractured.

In “Brigas Nunca Mais,” Martin L. Shoemaker presents one of the best tales in the issue. A framed narrative about a love relationship told through the voice of the groom at a wedding on board a space ship, this tale delights by featuring dance as a central image and metaphor. Nick Aames, a young officer and young Turk, both competes against and deeply desires a Brazilian astronaut named Rosalia Morais. Nick must make a very hard decision about their relationship. This story features what I rarely see in fiction outside of James Baldwin’s “Sonny’s Blues”: performative language that dances its way onto the page as it enacts what it describes. A very enchanting story.

“Karma Among the Cloud Kings,” by Brian Trent, is a seemingly soft story that possesses a very hard core: genocide. The story concerns a family of Jains who have migrated to Tempest in the Shakespeare System from their home on Midsummer’s Dream. Pacifists, the Jains observe the laws of Karma and take the ethics and morality of vegetarianism perhaps to their logical conclusion: the abandonment of any eating at all in favor of the practicing of photosynthesis. One of the Jains, a young female named Preema, discovers that debris floating near a space station is actually the remains of creatures who fought and lost a war defending their home against colonization. While I liked this tale and appreciated the exploration of religious values here, the story’s ending leaves me wondering about the possibly very negative moral and political implications of even the most peaceful and well-intentioned interventions in the fate of species. Perhaps I was supposed to be left wondering.

Erick Melton, in “Robot Boss,” paints an entirely plausible possible future of the workplace, in which humans labor for and are supervised by AIs. In this particular case, human Don Donalson works in the production department of a document-processing company and reports to an AI named “Cue.” In a delightful detail, Melton has the AI’s avatar, housed in an “A-Bot,” be a chimpanzee that scratches its head and rubs its stomach. Aren’t all bosses kind of like this? The action concerns a lost CD that must be found before the close of business. If the CD isn’t located, Don risks being fired. Such an outcome would be simply dreadful in this job-scarce economy in which most human beings retire and spend their time writing poetry or picking fruit. This tale delights because of its playful power dance between human and artificial intelligence, a dance that careens away from the stereotypical outcomes of either enslavement or revolution (hinted at through a playful reference to Skynet). I liked this tale both because of the sense of humor at its heart and its refusal to buy into cheap and sometimes paranoid binaries that always seem to lurk just off the page in any story about artificial intelligence.

“After,” by Ron Collins, is a beautiful piece of micro-fiction, exquisitely crafted and telling the story of what it’s like to chase and realize one’s dreams even when doing so brings both beauty and disaster to one’s life. The story also admirably renders the beauty and vastness of deep space.

“Blue Ribbon,” by Marissa Lingen, is a plague story involving children from Chornohora Station who are competing in a 4-H spaceship race. The race goes horribly bad when the station suffers an attack of a plague and becomes quarantined. The children thus become trapped in their ships until help arrives. The protagonist, the teenaged Tereza Pinheiro, acts as a surrogate mother for the children in the ships. I liked this story a great deal, but I sometimes felt bogged down by the discussion of in-cousins and out-cousins, which seemed to detract just a bit from the emotional resonance of the tale. This issue aside, Lingen nicely captures what it would be like to be a child and trapped, bored, and scared.

Elisabeth Adams’ spare and elegant “Second Birthday” presents a relatively near-future Earth in which most animals have become extinct. The protagonist, a food writer named Lisa, pays a visit to her friends Sven and Erika, who are genetically engineering both recently extinct creatures like elephants and the more historically distant animals such as mammoths. The reason for the visit is the second birthday of two smilodons. “Second Birthday” is quiet and short, but it’s haunting in the way in which it so convincingly portrays a future probably looming on the horizon.

In “The Badges of Her Grief,” Andrew Barton presents us with a tale of Earth colonization of the planet Esperanza. Eun-jin, an ethnic Korean, is concerned that a colonist, Qaummalak, ethnically identifying as an “Eskimo,” is teaching Earth’s religious traditions to the strewth, a race that when Earthlings first encountered it, seemed to consist of animals. However, as events turned out, the strewth, upon being domesticated by the Earth colonists terraforming their planet, proved quite capable of language acquisition and thought. The premise involving the relationship among religion, colonization, and resistance—not what one might suspect at first glance—is an interesting take on a complicated topic. While it’s very true that the colonization of the New World and Africa involved missionaries as well as the military, it’s always been very difficult to tell if the missionaries paved the way for colonization or worked to ameliorate the worst effects of basically political colonization on the colonized. This conundrum is a classic chicken-and-egg problem. Moreover, colonization these days, while involving religion, seems to me to be more economic in nature.

In “An Immense Darkness” by Eric James Stone, Dr. Antonio Reyes has just lost his wife to a nuclear attack on Miami. His only solace involves conversations with a computer simulation of his wife. Then the Federal Government, in the person of Wendy Bricker from the New York U. S. Attorney’s Office, arrives on the scene and informs Reyes that the terrorist has been captured. Because of the public nature of the collaring, the Feds can’t torture the suspect, who, it is thought, is planning more nuclear attacks. Instead, Bricker wants the good doctor to create a simulation of the terrorist so it can be tortured and information be revealed. While provocative, the story doesn’t quite work for me because it presumes, wrongly, I think, that the Federal government wouldn’t torture a terrorist planning nuclear attacks on American soil. In such a situation, with millions of lives hanging in the balance, the government would not hesitate for a second to put drugs and thumbscrews on the table. Stone’s tale seems to buy into the notion that the American Federal government is hamstrung by soft-hearted lefties. The recent very embarrassing emergence of documents about psychologist involvement in designing torture protocols for the CIA suggests that Stone’s fears about a government reluctant to torture are, sadly, unfounded.

In “The Extraordinary Extraterrestrial Togo Mouse from Ghana,” Ryan W. Norris tells the very fun, dare I say it, tale of the origins of a kind of mouse that just doesn’t seem at home on the Earth. Originally discovered by a German scientist in Togo in the 1890s, Leimacomys looks fairly similar to most other mice, but after testing in the twenty-first century, an American scientist in Accra notes that Leimacomys’ biochemistry is radically unlike that of any creature living on Earth. The mouse actually has formaldehyde in its bloodstream. Norris then shifts both location and time to deliver the rather hilarious history of the mouse’s, well, extraordinary arrival on the planet Earth.

Currently the Course Director of Literary Criticism and Analytical Thinking at Full Sail University in Orlando, FL, Douglas W. Texter is a graduate of the Clarion SF Writers’ Workshop. His fiction and non-fiction have appeared in venues such as Writers of the Future, New York Review of Science Fiction, and Alt Hist.