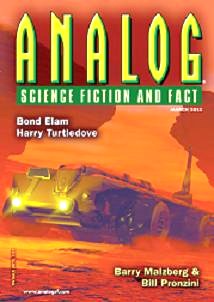 “The Radioactive Etiquette Book” by Marissa Lingen
“The Firewall and the Door” by Sean McMullen
“It’s the End of the World as We Know it, and We Feel Fine” by Harry Turtledove
“The Paragon of Animals” by Andrew Barton
“High Concept” by Barry Malzberg and Bill Pronzini
“The Snack” by Bud Sparhawk

This issue of Analog contains a diverse selection of SF stories, some serious, some more light-hearted in nature.

In “Instinctive Response,” by Bond Elam, humans have been in space for 500 years, mining primitive life on other planets for potential biotech breakthroughs, but have never discovered anything more advanced. Kate, an alien geneticist, and Nick, a genomic statistician, are sent to explore new planets for life. What they discover is beyond their wildest dreams, and it isn’t long before they find themselves prisoners of a once star-faring, hive-like race that’s struggling to survive an obscure, genetic-based wasting disease. Nick and Kate must find a cure or be killed. But, creating a cure also gives them the ability to reprogram their captor’s genetically-encoded instinctive behavior.

Although this story presents a number of intriguing ideas about the origins and evolution of life, the pace is too tame for me and tension absent. At no time did I feel that Nick and Kate’s lives were really in danger from their captors.

Marissa Lingen’s “The Radioactive Etiquette Book” reads as a light-hearted parody about an interstellar corps of diplomats struggling to cope with the alien abduction of the district director’s three teenage children. The difficulty, though, is that the rule book, what they call the Radioactive Etiquette Book, the Imperial Diplomat’s bible that dictates how to handle every problem and contingency, is missing. It’s only kept in hard-copy format to avoid being hacked. Evidently, a methane-breathing race stole it and the kids to learn how to be a good ally to the human Empire without revealing that they needed assistance with a meth-breather interstellar war. Having learned all they want, they sold off the kids for disposal. In a race against time, the diplomats must rescue the kids by learning how to think on their own without the aid of their all-encompassing rule book.

“The Firewall and the Door,” by Sean McMullen, takes place in the 23rd century when mankind’s most expensive space exploration ever finally reaches its target of Centauri A with its Earth-like world, Wells. Even before the launch of the unmanned starship, the Argo, argument had raged on Earth about the value of this venture, an argument that rears again after the starship is sabotaged while beginning its orbital approach to Centauri A. Because of its exorbitant cost, the Argo would be a one-of-a-kind ship, a situation which greatly troubles many among the scientists leading the Argo mission. But none are more militant about this than the starship-based entity that is a virtual clone of one of the Argo mission officers. Wells turns out to be an Eden world, filled with diverse animal and plant life. Yet Argo’s virtual entity refuses to share that information with Earth. The only way humankind can ever know what opportunities await them on Wells will be to send another starship, regardless of the cost.

I liked the twisty elements to this story, especially when the starship-resident virtual entity is revealed. I also appreciated the new dimensions added to the old arguments for and against the pursuit of new knowledge through space exploration.

Harry Turtledove’s “It’s the End of the World as We Know it, and We Feel Fine” explores a world where humans have been genetically modified, just like pets, to glean out the aggression and ensure the survival of the race against self-extinction. A fun, quick read that treats a deadly serious problem to the cutting insights of Monty Python-like surreal comedy.

“The Paragon of Animals,” by Andrew Barton, is set on a habitable moon of an alien gas giant. Tawnee is a strewth, something like a Terran moa but capable of language and filled with an innate curiosity about both her world and the humans in it. Cassandra has been banished to this world and raises money by selling strewth to other humans needing strong labor, until Tawnee uses bite and claw marks to create an image of herself out of sticks. What defines intelligence, sapience and self-awareness? If not language, then wouldn’t the ability to create and appreciate art be the ultimate standard? A well-crafted, thought-provoking story, which caused me to ask the corollary question: if someone can’t create or appreciate art, are they truly sapient? Strongly recommended.

Barry Malzberg and Bill Pronzini’s “High Concept” is a farcical portrayal of an Earth populated by aliens who are benign, even helpful, but still quite enigmatic about their home world or their purpose. Richard Ledbetter is a published author trying to get his agent to accept a story idea mocking the aliens in good “harmless fun.” The agent doesn’t buy the idea. Richard pushes back, convinced that “Bloody Alien Apocalypse” would be a high concept story easy to sell to the public. The agent refuses, threatening to drop the author as a client. Then the aliens secretly arrange for the author’s death.

Unfortunately, the story just doesn’t work for me.

“The Snack,” by Bud Sparhawk, describes a time when apps drive everything–apps in shoes, clothing, doors and appliances, reminding us to eat right, exercise right and buy the right stuff, all to ensure our well-being. A man is trying to impress a woman he’s dating and relies on the apps to help him eat and live properly because that is what she expects. However, the constant, nagging barrage of his apps eventually drives him to rebellion. Surprisingly, it’s his rebellion that finally frees his partner to become her real self as she too rejects the artificial life she’d been trying to live. Ultimately, we are unable to love another if we can’t first learn to love ourselves.

While the story is light, it also delivers a subtle warning about the ever encroaching influence of technology in our lives.

Louis West. With a background in sub-atomic physics, astronomy, biophysics, medical genetics and international finance, Louis is particularly fond of hard SF. He critiques a broad variety of unpublished works and volunteers at various New England-based SF&F conferences. His own SF writing explores the personal, social and cultural impacts of evolving nano-tech.