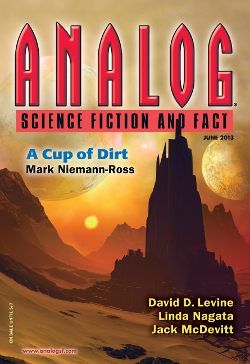 “A Cup of Dirt” by Mark Niemann-Ross
“In the Green” by K.S. Patterson
“Wavefronts of History and Memory” by David D. Levine
“Hydroponics 101” by Maggie Clark
“Out in the Dark” by Linda Nagata

In Mark Niemann-Ross’ “A Cup of Dirt,” soap-opera aspects of life intrude into a space station where hot-blooded Russian sisters alternately intimidate and entice the men they’re interested in, while Enzo, an Italian station worker, laments his absence from his beautiful wife and his family’s farm. One of Enzo’s fellow workers proclaims that hydroponically grown tomatoes are “processed urine in red skin” and “lack the soul of real tomato when plant seed in fertile earth.” Enzo’s ancestral conditioning takes this as a challenge. On a space station where dirt of any kind is forbidden and the Captain rules with a smile that terrifies, Enzo must somehow create fertile soil. But he doesn’t know enough and recruits help, a circle of conspiracy that grows until virtually everyone on the station knows. Then the Captain finds out from the Captain of another station. A delightfully entertaining story. A definite read.

“In the Green,” by K.S. Patterson, is an interesting story of self-discovery that reminds us that “not normal” people have their own very good reasons for being the way they are. Luna often takes care of her brother, Ben, an autistic savant who can speak, but usually prefers sign language, and rarely looks anyone directly in the eye. Their mother generally doesn’t acknowledge Ben’s condition, but their grandmother loves to see them. They live on Petra II, an Earth-colonized world where the wildlife is large and aggressive. Safety requires staying in the Green, but Ben hears the inaudible sonics that keep the wildlife at bay and prefers the, to him, greater comfort of the Yellow, just next to the dark. When Luna accidently stumbles out of the Green into the dark, she has to come to terms with who she really is before both of them are able to find their way back to safety.

David D. Levine’s “Wavefronts of History and Memory” is a tale of self-discovery and broken-hearted love between a human and a cyborg. Kell is a radioarcheologist who excavates radio signals instead of dirt to understand the past. To accomplish this, she’s been augmented to enable her to merge with an interstellar exploratory ship, to become the ship in order to use its extensive sensory capabilities to study mid-20th century ancient Earth’s Tojo Shogunate of 9,000 years ago. It’s taken her eight years to return to her studies after Kell’s great love, Aleá, left her. Now she’s back with better equipment, back where Aleá and she loved and parted, immersed in her work to try and forget. The new equipment allows her to discover amazing details about the events of the 20th century. But the signal is corrupted by an overlay noise that turns out to be radiation from Alea’s personal diary from their last time in this area of space. Should Kell invade her ex-lover’s privacy, and is she willing to pay the cost of what she learns when she does?

David Levine is an accomplished author with over 50 published SF&F stories, and I thoroughly enjoyed Kell as a cyborg-augmented radioarcheologist. But Kell’s transformation at the end of this story pales in comparison to the trauma she endures when she learns the true reasons why Aleá left her.

“Hydroponics 101,” by Maggie Clark, starts with a scene where Farmer deals with a swarm of spiders by snapping off their legs, piling their husks up and then drinking their bitter innards. Ewww! Loved it.

MudderTree tech is a form of rehabilitative therapy successful with the autistic and disabled, but also used as a form of life sentence for the criminally violent. The MudderTree is a nanite-construct highly sensitive to other’s thoughts of violence. Farmer’s sentence for mass-murder imprisons him in a huge glass sphere, a sealed hydroponic garden in which there is just him and a stalk of MudderTree. He has to learn how to make it grow and thrive. In return it feeds and sustains him, even achieving a calming bio-luminescence, as long as Farmer keeps his thoughts pure. Farmer succeeds far beyond his caretakers’ expectations in his rehabilitation and is offered transfer to a medium security facility. But he would have to give up his MudderTree, something that would rip away the peace he has attained.

Linda Nagata’s “Out in the Dark” is another in her series of award-winning Nanopunk stories. This one explores what it truly means to be human in a civilization where a person can live forever by growing precise physical incarnations of themselves. But these aren’t clones per se, for the Commonwealth only allows one consciousness for a person to be legally considered human. It’s the law, rigidly enforced, and failure means death of the illegal copy.

Zeke, of the Commonwealth Police, has been assigned a case regarding possible police collusion in manufacturing a new identity, Shay Antigo. Shay had been brought back by an asteroid miner, claiming she’d been born and grown among the rocks. She didn’t exist in any Commonwealth databases and, after passing all the required tests, had been granted legal existence. But Zeke didn’t believe it. He was convinced that the local Sato Station watch officer must have accepted bribes to allow Shay to skate through the tests, and that she had to be an illegally-engineered clone. However, the more he probes, the more certain he becomes in the watch station officer’s innocence. What he discovers, instead, challenges his very beliefs that a legal human should only have one consciousness.

An enjoyable and thought-provoking tale, consistent with the rich, hard SF detail of the author’s other work. Highly recommended.