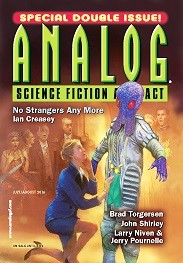 “Purytans” by Brad R. Torgersen
“No Strangers Any More” by Ian Creasey
“The Metal Demimonde” by Nick Wolven
“Cory For Coriolis” by John Shirley
“Pleistocene Brains” by Christina De La Rocha
“A Violent Wind” by Andrew Barton
“Story Night At The Stronghold” by Larry Niven & Jerry Pournelle
“Mandalas On The 405” by Elisabeth R. Adams
“The Battle Of Ceres” by Karl Bunker
“Fallacious” by Sean Vivier
“Death Of A Starship Poet” by James Van Pelt

“Fall,” by Arlan Andrews, Sr., is actually a continuation of a series of stories about the adventures of Rist, a young man of what seems to be a descendant of a post apocalyptic advanced Earth civilization. The storytelling is good, but it suffers a bit from being part of a multi-part series. While “Fall” can stand alone, the reader has the nagging feeling that something is missing.

Brad R. Torgersen is one of the best up and coming writers today and “Purytans” does not disappoint. Torgersen creates a world where everyone is immortal, genderless, and all around happy. In theory. The story centers on two parts of a triad searching out their third, though long dead. What they find is a society that has rejected secular immortality in favor of a spiritual mortality. The novella examines numerous themes while never becoming preachy or losing track of the fact that the reader wants an interesting story. Highly recommended.

“No Strangers Any More” by Ian Creasey, is a story about aliens that wanted to buy the moon and one particular alien’s relationship with a British princess who is helping host the talks. Creasey adroitly touches on questions of how entities view each other, the effect of social media on decision making, how society views its institutions and how royalty in a modern world still might have a place in shaping world events. Overall, the story is well done except for a few political comments that might date the story in the future. The portrayal of the British tabloids is spot on.

In “The Metal Demimonde” Nick Wolven looks at the impact of how total automation could affect the world through the eyes of a carney and the reaction of some who long for the days when the refrigerator didn’t have a computer and you could drive your own car. Overall, it’s a dystopian vision of “manuals” taking the role of Luddites wrecking the automated device and even the carnival rides. Unraveling the mysteries of why and how the wrecking occurs drives the story, which is more of a commentary of what total automation could mean for the human condition. Mr. Wolven does not paint a very bright future. If you like hope and optimism in your reading, this is not for you.

“Cory For Coriolis” by John Shirley starts with a story of an estranged father and son engaging in some questionable bonding efforts during a risky trip into a hurricane. The story has conflict aplenty and several twists and turns you never see coming. The only real quibble, and it is necessary to the plot, is that the near future world is one of runaway global warming, killer storms and a disrupted US that slavishly follows the Al Gore playbook. Given current events, it makes it a little difficult to suspend disbelief.

“Pleistocene Brains” by Christina De La Rocha, introduces a protagonist who is a professor showing students Neanderthal Stone Age tool making techniques while mulling over where the Neanderthals went, extinction or hiding in plain sight? The story is a master class in making stone age tools, which serves to misdirect the reader to where the author is really going. It’s a good story, but will take more than one reading to fully appreciate.

“A Violent Wind” asks the question “What motivates a captain to go down with the ship?” While the plot is straightforward, what sets the story apart is the factor of a starship threatened with destruction being itself sentient. Andrew Barton does a good job examining those questions without being overly maudlin.

“Story Night At The Stronghold” marks the return of Larry Niven & Jerry Pournelle to the world of Lucifer’s Hammer, the 1977 collaboration of two of the giants of science fiction that examines the idea of a comet striking the Earth and its aftermath before it became Hollywood’s favorite way to wreck the planet. Unlike most Hollywood fare today, the survivors are rebuilding, but the memories still haunt some.

This is a wonderful story for anyone who knows the book, and a decent standalone, but the reader will get far more out of the tale if you have read Lucifer’s Hammer.

In “Mandalas On The 405” Elisabeth R. Adams crafts an amusing story of some of the potential unintended consequences of creating the giant computer network needed to manage traffic in a world where automatic cars are becoming increasingly common. The story is well written and a bit reminiscent of the Arthur C. Clarke Tales from the White Hart stories where thought provoking technical issues were wrapped in a bit of humor.

“The Battle Of Ceres” by Karl Bunker is a decent story that encourages the reader to wonder about the backstory of monument markers. Set in a corporate free for all war set in the Asteroid Belt, the story revolves around the life and times of a space miner named Kat.

Karl Bunker travels the well worn path of soulless corporations waging war over resources. Alas, the writer doesn’t stray far from the path and while worth reading, the tale doesn’t stand out much from other such stories.

“Fallacious” by Sean Vivier seems to be a riff on academics, argument for the sake of argument and experimentations gone too far. It’s a cautionary tale and does not end well. While “Fallacious” has its thought provoking moments, it pushes suspension of disbelief past the breaking point in the actions that some characters take that the other main character simply lets slide.

In “Death Of A Starship Poet” James Van Pelt artfully combines a murder mystery investigation in a crime free society with a unique approach to starship travel. The twist and the resolution will catch you by surprise (to reveal either would spoil the story). Well worth your time.