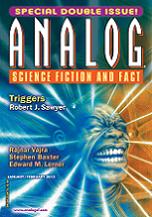 Triggers (Part I of IV) by Robert J. Sawyer (not reviewed)

“Project Herakles” by Stephen Baxter takes place roughly a half-century ago.  Thelma Bennett meets Chapman Jones outside the doors of the Royal Society.  They both work for the Secret Service.  Jones suspects something strange is going on out on Salisbury Plain, something called Project Herakles.  He wants Thelma’s help in investigating.  Jones soon discovers that giants are the progeny of the project.  The throwback result of an ancient Chinese emperor’s experiment, they seek emancipation.  Back at 10 Downing, Thelma has problems of her own.  There’s a coup underway.  It falls to Jones to find a way to retake control of the government.

This alternative history sets a languorous pace.  It slows to ponderous in the second half, but is still a decent read.

In “Doctor Alien and the Spindles of Infinity” by Rajnar Vajra, Dr. Alien is going about his daily business, treating his off-world patients, some of whom have been in treatment for some time.  He knows it’s going to be an unusual day when an alien named Deal bypasses normal channels to visit.  It gets stranger when Dr. Alien deduces that he’s being tested by Haxel, a member of a mysterious race called the Houck.  He discovers a mystery, a web of factions, veiled motives, and misdirection.  The intrigue involves Deal and another alien named Peeps, but revolves around the Houck.  Haxel asks him to take a trip with her, to act as an advisor.  It’ll only take a week, and his family can come.  Seeing a chance to resolve the mystery, Dr. Alien agrees.  It’s not until he’s on their world that the meaning behind their quest comes clear.

This is a sophisticated tale.  It’s both personable and complex, mixing solid character interaction with concepts of the infinite.  It’s a dense piece, but well worth reading.

Tiffany is one-hundred-and-eleven in “Humanity by Proxy” by Mark Niemann-Ross.  Her late husband, Walter, was an engineering project manager who’d spent his life trying to eradicate her faults.  Now she has Alzheimer’s, and has become saddled with a device called a sawhorse, something Walter helped to invent.  It’s a handy device, but she sees it as an extension of Walter and wants to be rid of the thing, until she reacts to a new drug.  She’s happy to have it when it calls for help.  An officer helps her home.

The timeline flashes back, to when the officer was a soldier, dependent on the sawhorse as a military aid.  That soldier knows Walter, and his chief engineer, Jonathon.  Jonathon knows Monty, who’d been hurt in the war.  Jonathon feels compelled by what he sees to ensure the sawhorses work as they should.

This story starts at the end, and sends the reader backwards.  It’s written well, but I found it hard to stay engaged.  With every change, it links to another set of characters.  I felt tossed through a succession of hoops.

“Ninety Thousand Horses” by Sean McMullen is another tale set in WWII London.  When a member of Churchill’s cabinet comes seeking Britain’s expert in rocketry, he discovers that Germany is well ahead in the race, and that the expert is a woman named Professor Clermont.  She tells him a story about Walter, a wayward nobleman’s son driven mad by the loss of his betrothed.  Walter blames his father, and plots a revenge that involves the creation of a rocket.  An acclaimed mathematician in Poland, but with a checkered past, Clermont is pressed into service as a spy.  Not only does she discover what Walter has planned, she finds love and friendship, and must make some heart-wrenching decisions.

This is another solid tale.

Stacy is charged with planning a dinner party in “An Interstellar Incident” by Catherine Shaffer.  The catch regards the other species to be invited.  Their idea of a party is to release dinner into a room, chase it down, and eat it live.  They find human customs revolting.  Stacy is worried about her career prospects.  Her alien counterpart is similarly distressed.  She believes the thing has been staged to create an incident, for which she’ll be blamed and sent home.  Stacy calls in a friend, Mark, who’s a wedding planner.  He has an idea that may save the day.  It appears he’s pulled it off, too, until a surprise guest arrives.

I found the end unsatisfying, but it’s still a light, fun story.

In “Listen Up” by Jack McDevitt, an artificial entity identifies itself as the sole resident of Ganymede.  It addresses the contentious, warring factions of modern Earth, and tells them to knock it off.  Then it tells them it will talk to a single spokesman.  When the world’s governments can’t agree on one, the entity appoints Pete Marshak, an astronomer with SETI.  Even then, the politicians can’t stop playing games.  Pete refuses to go along.  Instead, he asks some basic questions, and gets some surprising answers.

This is another solid, well-written story.

This is a solid issue, one of the strongest I’ve read.  I’d recommend it.