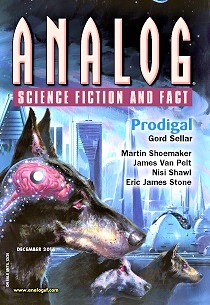 Analog and its predecessor Astounding have been published regularly for 86 years. That’s an awful lot of issues, but the cost of publishing has forced it to become a bimonthly. The December issue is the last monthly issue and concentrates on works of shorter lengths.

It starts out with a bang with “Prodigal” by Gord Sellar. It’s set at a time when you can buy enhanced animals—intelligent and with the ability to speak. Tim and Jennifer bring home Benji, a dog who has been given the treatments. As time passes, Benji becomes a part of their growing family. But being intelligent means he has a mind of his own, and he starts seeing the inequalities in how the enhanced dogs are treated. Finally, he starts to take action. This is a strong story, one of the best I’ve read this year. I especially liked the fact that it avoids the simple solutions and has something to say about human (and dog) nature.

“Like the Deadly Hands” is set on the settlement of Amends, a prison planet where people are starving to death due to lack of food. Carpenter Marie is a trustee, sent down to try to figure out what is going on. Meanwhile, Wayna, one of the settlers, is trying to learn which native foods are safe to eat. When the two paths meet, the tension between the settlers and the trustees becomes intense. Nisi Shawl has concocted an interesting conflict and problem, but I did not like the nastiness of the ending.

“Fermi Meets Sagan” by Robert Scherrer is a new twist on an old Fredric Brown story. An alien fleet of the Xarl, led by a commander named Destroyer of Worlds, discovers radio transmissions from Earth and what turns out to be the Pioneer probe. Entertaining light fare that breaks no new ground, but is a fun bit of flash fiction that would have been right up John W. Campbell’s alley.

Brendan DuBois contributes “Jewels from the Sky” about people who find old satellites and send them back to Earth like meteors, where they are salvaged. It starts with a short section describing the operation, then goes to Norton, Kansas, where Amy Thunder Smith and her family try to eke out a living finding the fallen satellites before their owners can get to them. But when they’re caught, things get complicated fast. The change seemed to come out of nowhere (accompanied by a switch from first person to third) but ultimately this is a story of revenge. I think the ending was a bit glib, but overall the story is a strong one.

Eliot Fintushel has a reputation for offbeat stories and “In Boonker’s Room” does not disappoint. Saul is a teen who is rescued from the bullies in his high school by Boonker, a friend with a mysterious background. They play what they call “the Game,” which is something of a viewer of the galaxy and lets you see how the universe it put together, as part of the battle between Life and Death. Much of the story is a physics lesson about the universe. I liked the way the story made its points about the precariousness of life, as well as the revelation about Saul at the end.

“Evolution” by James C. Glass tells about Tobi, a simple cleaning robot, who, over the years and centuries, is slowly upgraded into something human. It’s a very Asimovian story (I can think of two it’s reminiscent of) but Glass manages to keep the character of Tobi interesting and sympathetic as time goes on.

“Sister: Loki” also reminded me of another Golden Age work—in this case, by Frederik Pohl. Loki is a woman of the future, and the story documents her day. Arlan Andrews, Sr. shows plenty of imagination and scientific extrapolation, though it’s pretty weak on story and character. If you like ideas, though, this is a story for you.

“Crowdfinding” by Eric James Stone is a mystery involving the kidnapping of a young boy. The crime is caught by a passing drone, and Maria, the drone operator, gets involved in trying to catch the criminals. She is helped by various others using drones and other surveillance equipment as part of what is called a Smart Posse. It’s a fast-paced adventure, but breaks the cardinal rule of mysteries by not giving all the clues before the criminal is discovered. Still, the look at crowdsourced crime solving is a clever concept.

James Van Pelt‘s “The Continuing Saga of Tom Corbett: Space Cadet” is the story of Tomika ( Tom, for short), a teen girl misfit who wants more than anything else to go into space as part of the Space Academy—which, as far as she knows, doesn’t exist. But still she dreams. She strikes up a friendship with Jacob, who also is something of a misfit. But, of course, the Space Academy does exist, and she has to make a decision. A strong story with a lot of charm, and something to say about following your dream and doing the right thing.

Martin L. Shoemaker’s “Black Orbit” finishes the issue with a story about physics and suspense. Cynthia Allen is an undercover investigator who has found proof of crimes committed in the asteroid belt. She is killed but manages to hide the evidence in a shipment of refined ore that is being shot toward Earth. And she has to tell her boss and former lover, Park Yerim, where the evidence is hidden. Park is told of her death, and works with Bradley Stewart to uncover the message and retrieve the evidence—a plan that’s not easy to accomplish. Some nice action and an interesting societal construct—using certain rules of trust in order to accomplish actions—make the story work.

Even though it’s cutting back, Analog is still going strong, with a nice blend of new ideas and old concepts seen in a more modern light.

Chuck Rothman’s novels Staroamer’s Fate and Syron’s Fate are available from Fantastic Books. He has stories in Temporally Out of Order and Flash Fiction Online.