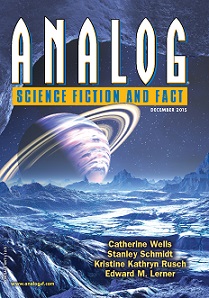 “A Case of Identity” by Edward M. Lerner
“Footprints in the Snow” by Bud Sparhawk
“The Museum of Modern Warfare” by Kristine Kathryn Rusch
“The Master’s Voice” by Brendan DuBois
“Paris, 1835” by Bill Johnson

Motherlove is tired. Near the end of her useful life, she grapples with the needs of her village set against the needs of her two daughters, the clever and compassionate Workwork, and the younger and more adventurous, Neverrest. The problem is that she must choose a successor, and the choice comes down to Workwork and her cousin’s daughter, Alwaysright. To complicate matters, both her daughters are “stupid”—they don’t carry the memories their people are normally born with, and must be laboriously taught about the world and all its dangers. Catherine Wells, in her novella “Builders of Leaf Houses,” also throws in a soon-to-erupt nearby volcano for good measure. Wells gives us a rich and complicated world, with relatable characters, and a plot drawn almost entirely from high school politics. That’s not exactly a knock, as the story is well-told, but it is one that has been done to death. Sharp-eyed readers may have noticed that I still have not mentioned the human characters. That’s because they are almost—almost—completely unnecessary to the narrative. They seem to be there only to notice, and comment on, the coming evolution of both Motherlove’s species and her culture. They are the chorus in a Greek tragedy, and are about as memorable. Still, the writing is excellent, and the ending is satisfying—even if a bit predictable.

A Qmind is a terrible thing to waste. In his novelette, “A Case of Identity,” Edward M. Lerner gives us a character we can sink our teeth into. An artificial intelligence born of quantum computing, Sherlock/Remington Steele (he can’t decide on a name) begins his tale Dashiell Hammett-style—tough-guy detective persona covering him like an old pea coat. Mary Michelle Millikan, a beautiful heiress (because of course she is) has tasked him with finding her missing fiancé. Who also happens to be a Qmind, existing only as computer code in a server. There are suspects of the usual variety, and a fine twist at the end that I thought I saw coming, but dismissed as too Angel Heart for such a tale. Everyone, other than Sherlock/Steele/Harry Dresden, is a bit two-dimensional, but I expect that’s how an artificial intelligence would perceive us meat-minds anyway.

Bud Sparhawk, in his “Footprints in the Snow,” treats us to a Christmas miracle. The Tsuanit, after crashing their starship into the Pacific Ocean, are welcomed on Earth as refugees and placed in communities to live as our neighbors. Alberto, channelling Walt Kowalski, wants nothing more than for the “illegal aliens” to go somewhere—anywhere—else, and get off his lawn. Bigotry and prejudice in the face of kindness are really hard to maintain, though, and Alberto gets an education in the true spirit of Christmas from those who don’t know, much less understand, the story.

“The story of loss was private, and only in the eye of the beholder.” I am in awe of an author who is able to distill an entire story down to a single thought. In “The Museum of Modern Warfare” by Kristine Kathryn Rusch, an old warrior, now a diplomat to the alien planet Earth defeated in an interstellar war, is sent to visit a war memorial on the planet of her last great battle. The locals who joined the humans in their efforts, known semi-affectionately as Cranks, have recently opened their museum/memorial to the public, and many veterans have complained of the horrifying and disgusting displays seen there. What results from her investigation is a lesson in cultural differences. How the dead should be honored is a question with many answers even among present day humans. Reverence, like art, is subjective, and fully in the eye of the beholder. As Heinlein put it, “a great artist… can look at an old woman, protray her exactly as she is…and force the viewer to see the pretty girl she used to be.” Recommended.

“The Master’s Voice” by Brendan DuBois is less about the master, and more about the students. Jake Stone is a third (possibly fourth) generation Mars Colonist, and he is about to turn seven—a particularly important time in a young colonist’s life. By this time, he is supposed to have learned all he needs to know to survive and help the colony thrive… but there is more to it than just chores. On his shoulders—like those of all the colony—rest the hopes and dreams of the Master, though never resting his “eyes on fleecy skies, And the cool, green hills of Earth.” This is a very nice coming of age story, and a slice of life from the type of tale the “Master” excelled in telling. Good stuff.

If you were required to do so, could you rebuild today’s society from scratch? How about an entire timeline? This is what Martin and Ingraham have tasked for themselves in Bill Johnson’s “Paris, 1835.” Time travellers, they are trapped in the past by an ever-changing future, forced to set aright what has gone wrong, Quantum Leap style, to recreate the future they might return to. It sounds complicated, but only because that’s the nature of time travel and the infinite worlds problem. The Stone Eagle is a way station for displaced time travellers, and they are about to deal with another timeline-altering event. Will this one be the one to set things right? Stay tuned…