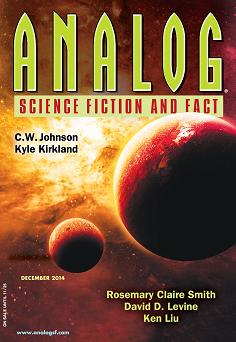 The December issue of Analog begins with “The Anomaly,” the story of Ketkam, a young man from the slums deep below a city who wants to go to the stars. He starts out slowly developing his skills as he works toward that goal. C. W. Johnson has created a likeable character whose willingness to try to learn carries the story. The situation is well thought out, and the culture displayed is fascinating. The ending is not too surprising, but the twists along the way make it all work.

Rosemary Claire Smith‘s “Dino Mate” has Marty Zuber taking a trip back to the Jurassic in order to observe dinosaurs, and to find a spot for time tourists to visit safely. Unfortunately, he runs into his colleague and professional rival Derek Dill. Worse, Derek is also Marty’s romantic rival and has brought back Marty’s girlfriend Julianna Carlson as a way to both annoy Marty and try to prove he’s a better man for his theory about the mating of Kentrosaruses. This is a romantic tale about dinosaur (and human) mating and I enjoyed it as much anything I’ve read this year.

“Citizen of the Galaxy” by Evan Dicken is a more serious story set in Japan after aliens have discovered Earth. Mizoguchi is an educator who is having trouble adapting to the aliens, but, closer to home, understanding her teen daughter who has embraced alien culture in a big way. The theme of change and adaptation runs through the story, and it was a clever move to set it in a culture outside the U.S.. The lesson involved is shown without lecturing, and the point is smartly made.

“Mammals” is the story of a sentient computer in a time where they have taken over the Earth. Humans are gone, but the machines are finding that something is attacking their infrastructure. The story is told by a computer consciousness who is investigating the problem, and who gets a surprising answer from one of the subroutines it sends out. David D. Levin writes a strong story about evolution in action, and how one species replaces another.

I always look forward to reading stories by Ken Liu, and “Saboteur” does not disappoint. It examines the fallout from the development of driverless vehicles; the narrator is a truck driver who has lost his job as computers run big rigs. His bitterness is compounded because the new system cost his brother his life, so he plans a bit of sabotage to discredit the system. The story’s look at the human dimension of change is a good one, and what makes it stand out is the fact that it goes in a different direction than what might be expected.

“Twist of Coil” by Miki Dare is based on an alien culture, seen from within. Jesethay is one of the aliens, whose sense organs are at the tips of “coils” (I assumed something like tentacles), and who wants to be a dancer, admiring the great Zalija. But the society is a religious autocracy, worshiping the Great Coil, and, when Jesethay’s brother is dying, she is ordered by her priest to have her coils amputated as an offering – making her unable to dance. Jesethay is a compelling character in a difficult situation and her excruciating choice makes for good fiction.

“Racing the Tide” shows a near future Earth where the sea levels have risen disastrously, set in a small community off the shore of Florida that is trying to make a decision whether to keep the town together or to take an offer to buy it out. Tara Orton is the mayor, raising her granddaughter Emma and trying to work to make it survive. Tara has other issues, too. Craig DeLancey shows a woman struggling to make sense of a complicated situation and trying to find a way to solve both the community’s and her own personal problems.

“Humans First!” by Kyle Kirkland shows Arlin Brant, who is attacked without reason by the radical group that gives the story its name. The world is one where machines are taking over more of the roles of humans. Arlin is caught up in it as the computer psychiatrist decides – despite his protests – that the attack made him prone to attack others, leading him to be treated like a criminal even before anything happens. This tale explores the meaning of how to be human, and how to balance the possibilities of technology with real life.