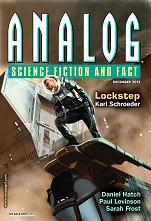 “The Chorus Line” by Daniel Hatch
“Ian, George, and George” by Paul Levinson
“The Deer Girl Hitches a Ride” by Sarah Frost
“Fear Response” by Lesley L. Smith
“Oedipus at the Sperm Bank” by Joel Richards

Interestingly, each of this issue’s five stories is written in a first-person POV, many with a common theme of fatalism and failure, and yet voice and tone vary greatly amongst them.

“The Chorus Line” by Daniel Hatch is a first-person POV man hunt through Ethiopia’s recent past to prove whether Eric Cunningham actually captured video of humanity’s ancestors dancing, or whether the popular video is a clever CGI concoction preying on the recent popularity of time travel videos. After the text takes the reader through a long-winded explanation of the past-viewing technology and its general successes and failures, including the technician Boswell’s personal obsession with Shakespeare, the plot finally reaches a possible lead into Ethiopia in the cooling footsteps of Cunningham and his controversial video. In its attempt to appeal to the latent anthropologist in us all, this story falls flat with an anti-climactic end.

“Ian, George, and George” by Paul Levinson follows George’s (that is, George Orson Welles) elaborate plan to alter his own past during his booked trip to the 1970s. Along the way, he encounters few obstacles beyond his own worry at getting caught, until eventually this worry transforms into a general ominous recognition of the mutability of the past. Although Levinson has utilized real life personas that add interest to the story as historical science fiction, his take on time-travel paradoxes is nothing new.

“The Deer Girl Hitches a Ride” by Sarah Frost is a horror story set in post-apocalypse USA, where a truck driver takes on an unlikely passenger who appears to be both woman and deer. Sarah Frost certainly gets the reader’s blood pounding with plague victims and violent deer-women, but if she is making a statement about the corruption or adaptability of nature, that is left up to the reader’s interpretation.

“Fear Response” by Lesley L. Smith follows the coming of age of a young alien who wishes to be a scientist and travel the stars. The aliens, although never described in physical detail, are portrayed as animalistic to a fault, which contributes to several secondary characters’ emotional over reactions and bad decisions, leaving our protagonist as the voice of reason on a dangerous FTL voyage between the stars. Smith provides us with an interesting view of the alien’s society through his first person telling, and neatly begins and ends the story on a single thread of interest and social criticism disguised as fatalism.

“Oedipus at the Sperm Bank” by Joel Richards takes self-interest to extremes when a business tycoon clones himself to ensure his business’s success while he goes off on an adventure. Although the setup is top-heavy, this does allow Richards to explore the clones’s characterization, and the end delivers with decisive action. Unfortunately, the characters are not very likeable, the majority of them having either been cloned from the ego-centric tycoon or else having the ambition of getting in his pants. This story is about control and thrives on power plays.