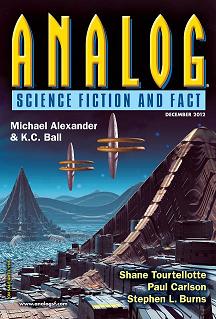 This issue of Analog contains a fun selection of SF and speculative fiction stories, ranging from a murder mystery to slap-stick comedy. I really liked most of these tales, but would recommend reading them all.

“The Moon Belongs to Everyone,” by Michael Alexander & K.C. Ball, is an SF murder mystery set on (and around) a 1970s moon base where America’s first Mars ship is nearing completion. The science of this alternate timeline Earth seems plausible, but never answers the basic question of why send a manned mission to Mars? The reasonable first step would be to send unmanned probes, a project that has taken 40 years in our reality. That then begs another question—has this drive to send humans to Mars come about because America has fallen victim to the same single-minded search for glory that plagued the Soviet space program with so many tragic failures (as opposed to the subsequent much more level-headed and successful Russian program)? I found nothing in the story that addressed this vexing issue for me.

The mystery component of this tale drives forward with a steady, tension-filled pace. Laura Kerrigan used to be a cop on Earth, until she’d been fired and her reputation smeared. Now she gets a chance to get her badge back, if she can solve the murder of a man found frozen in one of the Mars ship’s Hydrogen-source ice cylinders. Kerrigan must immerse herself into the harsh, survivalist culture of the moon-based ice miners to flush the murderer without getting killed herself. Yet success brings the revelation that she doesn’t really want to go back to Earth.

Shane Tourtellotte’s “From an Antique Land” explores a clash between dreamers and realists in a small-town post-apocalyptic world. The dreamers seek to reinvigorate humankind’s sense of self-worth while the realists strive to rebuild life one day at a time. Interesting characters plus the portrayal of an unexpectedly stable society made this story a thought-provoking read, although use of the conspiracy theory that mankind never landed on the moon seemed a bit contrived.

“Silent Mode,” by Paul Carlson, describes a world where genetic neutrals, humaniform robots and robot A.I.s have become embedded into human society. Of course, this has also sparked the mindless rage of the genetic purists, the anti-robotisists and the anti-techies, all blaming these changes for the loss of jobs, if not human control of the world. Claude, a short-haul trucker, must thread his life through this morass, while keeping his strong-minded wife happy and his robot friends protected. I liked the observation, by one of Claude’s extremely intelligent, ex-escort robot friends, that complicated robots require complicated repairs; thus, robots will always need to be on good terms with humans–a complete contrast to the Battlestar Galactica view of robot abilities. There was also a bit of the superhero theme in this story, since Claude and his robot friends seemed to have single-handedly managed to modify robot programming to permit them to protect themselves against the dangers of idiotic human commands. A light-hearted yet thoughtful tale.

Stephen L. Burns’ “Hearing Impairment” made me laugh. The Amaai, Peace Corp-type aliens, have come to Earth to help. But many, especially within government, refuse to listen, much less believe that the Amaai are even real. The trick to getting constipated Congressional Committees to recognize the new reality was just that, a trick. The Amaai offered, “given the proper circumstances,” to give humans “a swift kick in the ass to help the process along” but insisted that humans had to first create those circumstances on their own. This is a delightful tale about the intransigence of humans in the face of change and the need, all too often, for humans to boot-strap themselves out of messes of their own making.

“The Perfect Book,” by Ken Liu, describes a time when every book is custom made to fit each reader’s individual tastes, the “have-it-your-way” of the literary world. But, does a book then no longer have a mind of its own, a reflection of the author’s creative genius? Perhaps the essence of perfection is not the absence of problems, but the unique way in which imperfections reflect a single being, a person we’d like to know. It took several reads to extract everything the author has embedded in this story but well worth the effort.

In Maya Kaathryn Bohnhoff ’s “Garden Spot,” who would imagine that the first alien words learned by humanity were “get off my lawn?” Matty had dreamed about First Contact his entire life, but never guessed that he would trigger it by messing up a gecko-like creature’s yard while collecting biological samples on an alien world. A fun, light read.

“Cats Know,” by Richard A. Lovett, follows the rambling thoughts and memories of Ed, a widower five years apart from his dead wife, Marie. He’s struggling to soldier on, when he encounters a holovert AI of a beautiful woman, who used to be his chemistry teacher. As he finds ways to restore her full self-awareness, she teaches him about the joy of being a friend to those who need him. Things wouldn’t be the same, since his wife had died, “but maybe it didn’t have to be.” I enjoyed this, but personally would have preferred more emotional intensity in Ed’s journey of rediscovery.

Liz J. Andersen’s “Scary Monster” is good slap-stick fun, as Renaissance Faire meets bio-engineered fire-breathing dragon running amok. Dr. Jesmuhr is a human interstellar vet tasked with helping all non-intelligent lifeforms. She has been tasked with euthanizing a large, scaly beast, a dragon that has become too problematic for the locals. The Society for Historical Life settled this planet precisely because of its native pterodactyl-like species that their knights could mock fight with their Holo-swords. Their specialty is re-enactments, not real battles. The bio-engineering was supposed to just make the dragons sparkle a little, but one has unaccountably taken to burning things on a wide-scale basis. What’s the vet to do? Put the beast down, or cure it?

Louis West critiques for Critters.org plus Spacecrafts. He also does volunteer work for the Massachusetts-based ReaderCon. His education and work experience was in biophysics and medical genetics before migrating to international finance. Yet he retains a strong interest in astronomy and sub-atomic physics. He enjoys hard SF, urban fantasy, supernatural and fantasy, and writes in a bio-punk style, focusing on the personal and social impacts of new technologies.