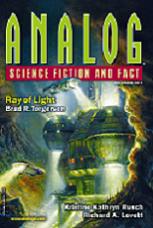 “Ray of Light” by Brad R. Torgersen
“The Impossibles” by Kristine Kathryn Rusch
“Not for Ourselves Alone” by Charles E. Gannon
“Turning It Off” by Susan Forest
“Freudian Slipstream” by Brad Aiken
“Hidden” by Kyle Kirkland
“Art for Spendor’s Sake” by Dave Creek

In “Ray of Light” by Brad R. Torgersen, our hero attempts to deal with the rigors of family life in a stressful environment.  His daughter, Jenna, is doing what teenagers do, but in this new world, breaking the rules can mean life-or-death.  They live in a post-apocalyptic society, one in which the earth’s surface has become dark and ice-covered.  His daughter has always been fascinated by the idea of sunshine.  She and others have rebuilt an old station, creating a beach-like atmosphere.  It’s a wonderful spot, but he finds it empty, and worries about where they’ve gone.  Then he finds something he didn’t expect.

This is a well-written story with an interesting premise.

“The Impossibles” by Kristine Kathryn Rusch tells us of Kerrie, who is trying to survive her two-year law stint in First Alliance Interspecies court.  It’s also known as The Impossibles, and is a far uglier life than she’d imagined.  There’s no justice in this system; the workload prevents lawyers from doing more than simply showing up.  When Kerrie is offered a case where she might get an acquittal, she knows there’s a catch.

I was drawn into this engaging tale.  It has a great opening.  Though it becomes somewhat convoluted, it remains an entertaining read.  This is my favorite story in the issue.

In “Not for Ourselves Alone” by Charles E. Gannon, Sergei Andreyev is a Russian, part of a spaceplane crew in a world unified by war.  The enemy is an alien species, the Arat Kur.  Sergei does his job, and keeps his distance from his American crewmates.  Though the enemy has superior technology, Sergei feels sure they have a weakness.  The information is in the data; he just needs to see it.  Sergei finds a potential ally in an American named Costa, but is dogged by his own prejudices.  In a battle near Jupiter, Sergei and Costa figure out the Arat Kur’s Achilles’ heel, but it may be too late.

If you enjoy military life and scientific detail, this story is nerdvana.  Otherwise, it’s just a well-worn plot.  Though it takes a shot at character transformation, Sergei remains too stiff and distant to be engaging.

Carter lives with his parents in a safety-obsessed world, in “Turning It Off” by Susan Forest.  His friend Sam is a hacker, and she’s figured out how to turn off the safeties on all their devices.  When the parents leave, Carter and Sam try out her new abilities on some of the household items.  Despite less than stellar results, they decide to move on, to test out the car.

It’s an easy read, but the characters are cartoonish.  As social commentary, it falls flat.

In “Freudian Slipstream” by Brad Aiken, Jackson Carr spends every afternoon at a beachside bar, watching the same beautiful woman materialize, riding a horse.  She stops for an ale and then leaves.  It takes Carr some time to wonder why he and Sam the bartender are the only people present.  Gradually, under Sam’s urging, memories of Carpathia return.  It’s a planet twenty-two light years away.  It’s also humanity’s last hope.  Carr is on a ship in suspended animation, his mind kept active and on track by Sam, the AI.  Carr is working to counteract a deadly pathogen the settlers of Carpathia have encountered, while Sam had found a novel use for Carr’s recurrent dream.

This is another staple of SF – the colony in trouble.  Some of the details struck me as wonky, but it carried me along, an entertaining read.

Robinson is called in by the military in “Hidden” by Kyle Kirkland.  The problem is a nineteen-year-old supergenius named Bernard Flik.  Robinson is an expert on supergeniuses.  He was instrumental in getting the drug that creates them banned, because supergeniuses deteriorate while still young.  The military believes that’s what has happened to Flik.  He claims he can prove the existence of hidden creatures on Earth.  They think he’s crazy, but he’s gained control of a military installation and a new weapon.  Robinson is given the job of talking Flik down, but discovers that Flik isn’t crazy, and the weapon isn’t the only secret the military has been keeping.

This tale is worth reading for the ideas, though I wish it had offered fewer, and found more depth.  It postulates the existence of unseen beings, combines that with government duplicity, and then throws in a discussion about the rights of some to make choices for all.  They’re interesting thoughts, and Kirkland does a good job of maintaining a clear storyline, but it leaves many loose ends.

In “Art for Spendor’s Sake” by Dave Creek, Ambassador Chanda Kasmira has been charged with evacuating a planet, while an artist insists on working there, further complicating her life.  Two primitive but intelligent races live on Splendor in a symbiotic relationship.  It’s a diplomatic challenge to prepare both races for the changes they’ll face.  Chanda must deal with recalcitrance on one side and slavers on the other.

It took me three tries to get through this tale.  It’s a welter of confusing characters and unexplained plot leaps, as when Chanda hears a secondhand report about villagers performing new tasks, and immediately decides they’ve been taken by slavers.  I think it was meant to be absurdist, but the fact that I’m not sure is, maybe, ‘nuff said.  This story would have benefited from a good shave with Occam’s razor.

This is my first review of Analog.  I definitely plan to be back.