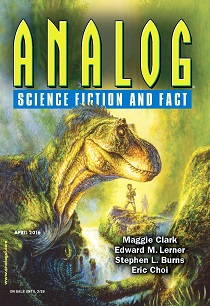 April’s issue of Analog contains four novelettes and five short stories, with the usual range from light-hearted to dramatic, past Earth to dystopian future, and a couple of space-based stories.

The first piece of the issue is the novelette “Seven Ways of Looking at the Sun-Worshippers of Yul-Katan” by Maggie Clark. The narrator comes from Yul-Katan, a planet that maintains a primitive religious worship of the sun, resisting societal evolution despite its presence amidst other planets of Allegiance. He (or she, or “xe” as is used for others here—some people in this future seem to be agendered) has sworn to never return to Yul-Katan, whose practices killed both his parents. Years later, he is with the team of the spaceship Petrin, doing a biological survey of an unnamed moon, when they get a distress call and find a dying man from Yul-Katan—one who should have been undergoing the final rites of passage according to its religion, but who has apparently fled that rite. The situation escalates when agents who appear to be from Yul-Katan take other Petrin members hostage in order to recover the man and the pod. A lot of people end up dying, and the narrator’s team realizes that something much larger may be at stake—that Allegiance may be vested in a great secret about Yul-Katan’s religious traditions.

This is a complex story, with many questions that remain unanswered. It focuses on the growth of the narrator, refusing to resolve minor characters’ paths cleanly or comfortably. This seems to be part of what shapes the narrator—his life is one of constant loss, of having people close to him abruptly torn from him for reasons he doesn’t quite understand. He ends up coming full circle from his departure from Yul-Katan to his facing of the reasons for his departure so he can make the same choice from a place of awareness instead of denial. Despite loose ends being integral to the story, I admit some frustration with that aspect of it. Still, I was engrossed by the read, and it’s definitely better to want more when reading than to want less.

“Soap Opera” by Edward M. Lerner takes place during a time when television sets were still rare and most people got their entertainment from broadcast radio. In a large building in New York City that houses a radio station, engineer William Findlay experiences two fateful meetings on the same day. The first is marked by love at first sight of Clara Chase, an actress who has come in to do a regular show. The second is with the show’s sponsor, Moore of Moore Soap, who tells William to replace the show’s live-organ-played musical cues with recorded music—but only using the records he provides. There are two nefarious plot twists that arise from these meetings: sales of Moore’s soap rise inexplicably and exponentially with the use of the recordings—pointing to something unnatural and unethical happening. Also, speaking of unethical, Moore is trying to blackmail Clara into becoming his paramour, threatening her with the employment contract he holds over her. William needs to figure out a way to bring Moore down before Moore can make his threats to Clara a reality.

The speculative element of this story is fairly minor, so I kept expecting something else to emerge besides a simple subliminal element to the recordings. This didn’t detract from my overall enjoyment of the story, in which all the right things happen in a mild good vs. evil soap opera about a soap opera.

In “Diamond Jim and the Dinosaurs,” by Rosemary Claire Smith, Dr. Marty Zuber is a wildlife biologist living in a future where the benefits of time travel have been commodified by large corporations. Legal limits control what can be done with specimens of extinct animals from the past, although if Marty’s corporate boss had his way, he’d wiggle through the loopholes to get the DNA of dinosaurs to bioengineer miniature pets for every household to buy. Upon learning that a start-up adventure company has merged with a mining company and has sent a couple of men on a time-jump to Mesozoic Antarctica for reasons unknown, Marty and his journalist girlfriend Julianna get their corporate sponsors to send them there as well. Multiple ethical dilemmas await them—is it all right to take DNA scans of the dinosaurs? What if the mining company wants to strip-mine the land for diamonds? How much room does Marty have to make a choice when his company is ordering him to do something that Marty deems unethical?

The future here isn’t quite dystopian, but it’s glum enough for its portrayal of a culture that has only gotten worse in its consumerist, materialistic, corporate-controlled focus. Money and the media control the dumbed-down masses. The tide of greed is only controlled by threads of legality and the occasional twinges of conscience from individuals. How depressing! Although the tone of the story is light, and there is plenty of pseudo-comic relief from the visuals of characters being chased by dinosaurs or fending off children’s questions, it neither evoked deep thought nor made me feel good.

“Playthings” by Stephen L. Burns is a crime story, narrated by John Blank, a police operative who is investigating a death that turns into a series of similar murders. The victims are all regulators; in a society that ranks people from A- to D-level, the C-level regulators have behaved with impunity amongst the D-level of society, recruiting for prostitution, trading in guns and drugs, and—as Blank discovers—stealing children. Blank faces increased pressure from his higher-ups to solve these murders, as the threat to regulators also threatens the higher-ups’ demands for children to sate their appetites for pedophilia and for organ trade. As he gets closer to the truth behind the murders, he also faces a personal questioning of his ability to exercise his own morality within the stratified hierarchy in which he operates.

This is my favorite story of the issue. Although it’s hard for me to believe the future could ever hold an outwardly acknowledged caste system with increasing levels of institutionalized dehumanization as we proceed down the levels, this element, somewhat overused in dystopian works, happens to be effective in this story. Also, it’s easy to feel good about the underdogs in this story—from John Blank, who wants to do good and is waking up to his ability to do so, to those who pretend to be humble acceptors of their place in society but who operate as vigilantes to subtly undermine abuses of power. Good and evil are black and white in this story, but it’s great storytelling, great entertainment, and the writing is tense, tight, and presses all the right emotional buttons for a satisfying finish.

In “Alloprene,” by Stephen R. Wilk, we can get a feel for some of the issues that are still relevant in a future society. Jason comes home to his girlfriend Audrey, bringing a bottle of wine that he bought from receiving extra pay for an experiment he took part in that day. As they dine and have their mundane, yet homey interaction, Jason tells Audrey about the experiment—how he had to interact with an odd-looking robot named Alloprene. The interactions seem to have no logic—Jason and Alloprene separate Go game pieces, play with strips that make musical tones, and dip things in brown stuff and wrap them in foil. Audrey and Jason try to figure out what the experiments are about, and why the robot is named Alloprene.

When I first started reading “Early Warning” by Martin L. Shoemaker, I was sure I’d read it in a past Analog or Asimov’s. It starts with the narrator, Art, entertaining a future him in his apartment, one who’s traveled back in time to warn him about how horrible his life will turn out if he allows the girlfriend he just had a fight with to walk away forever. Art, skeptical at first about whether the future him is an impostor or not, begins to be convinced as the future him fills him in on all he’s done in thirty years. What Art does with the information is the twist, and only when I got to that point in the story was I certain that I hadn’t read this story before.

So the major strike against this piece is just that it‘s been done so many times, and the only unique part about it is the punchline. Other than that, it’s entertaining enough. The concept is quirky enough that it’s worth looking at yet another permutation of what could happen if you meet yourself from the future.

“Lonely Hearts of the Spinward Ring” by Paddy Kelly is a story contained within one page of personal classified ads for life forms in the Spinward Ring. The reader gets a vague picture of the different forms of life, from humans seeking partners for a wet-world safari to a variety of plantlike creatures, both herbivorous and carnivorous. There’s not much to say about it, but it’s clever and it made me smile.

In “Sleep Factory,” by Rich Larson, Abdoulaye and his partner Safi work in a sleep factory, where they get plugged in to machines that interface with their dreams so their sleep-consciousness can operate drones that fly over Dubai. As fascinating as this experience sounds, inherent in it are all the usual limitations of insurmountable poverty and factory life. The job is restricted, they need to bribe overseers in order to choose where they are “racked” into the machines, and the job is dangerous—each time they sleep, they run the risk of their brains being fried from surges of energy. They are almost to their goal of having enough money to leave for London, and of course tragedy strikes just before that goal is met.

This is a tense, tragic story with only bittersweet redemption. I enjoyed it for its rich, visual, visceral descriptions—the dream-sequences just as much as how they contrast with the feel of the factory and of real life outside of it—and for the concept, novel to me, of the dream-powered drones, superimposed over a plausible future of poverty that hasn’t been solved even as technology advances. I appreciated the characters and their love story, and although the plot line is fairly predictable, within the premises of this story, nothing else could really happen. This is a piece that lingers on the palate.

“Most Valuable Player” by Eric Choi gives us a look at baseball as an institution in a society of the future. Terry Jospin is an ex-professional baseball player who used to be great, nearly beating Ty Cobb’s record, until he lost his hand. With a prosthetic hand that he still hasn’t completely adjusted to, he’s bitter and negative, and he soon chases away his wife and loses custody of his son. The story ends with a little solace from an unexpected source, a sign of Terry taking a step out of his misery.

I wasn’t sure what the point of this story was. It seems to exist to showcase baseball of the future through a snapshot of a has-been. It says, perhaps, that some things change, but other things—marriage problems and fragile egos among them—never do. I wanted a bit more than I could find here.

Colleen Chen is the author of the novel Dysmorphic Kingdom and can be located at www.colleenchen.com.