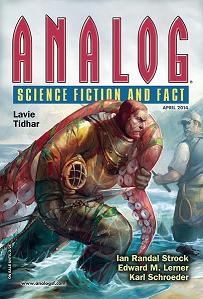 “A Fierce, Calming Presence” by Jordan Jeffers
“Pollution” by Don Webb
“The Oracle of Boca Raton” by Eric Baylis
“Wind Reaper” by Jon Hakes
“It’s Not ‘The Lady or the Tiger?’ It’s ‘Which Tiger?’” by Ian Randal Strock
“Whaliens” by Lavie Tidhar

“A Fierce, Calming Presence,” by Jordan Jeffers, is an eco-political thriller, murder mystery and humans versus aliens story all rolled into one. Hugh Hacker is a Federation Ecologist, with enormous political power, who’s been sent to Ceres to investigate problems between the humans mining this world for heavy rare-earth ores and moa-like aliens with whom the humans try to co-exist. The birds are federally protected as a subhuman species of high intelligence, but many of the miners view them as no more than “dumb animals” that should be exterminated. Hugh must determine why the birds are attacking–slashing, eviscerating and brutally killing–humans even though the humans had allegedly done everything mandated by the Federation to ensure a peaceful sharing of the world. But, to solve this mystery, Hugh must ferret out the power struggles between the local mine bosses, the miners and the local mayor, all without getting himself killed in the process. Of course, this sometimes required him to directly confront his adversaries, both the birds and humans alike, using a technique taught all ecologists: FCP, the ability to project a fierce, calming presence in the face of predators who could easily destroy him, which led him to do some things no ecologist had ever done before.

An intriguing tale with several complex plot twists and a nice, steady build in tension. Hugh’s life is clearly in danger throughout, and his ability to maneuver through those dangers admirable. I did have to suspend belief in a big way, though, when it came to where this story took place: Ceres, a thousand kilometer dwarf planet in the asteroid belt. Nothing about the setting made sense—how was Ceres made habitable, where did the bird aliens come from, and how could humans be heavily muscled in such a mini-gravity microclimate? Consequently, I was deeply disappointed in what could have been a powerful story.

Don Webb’s “Pollution” is, at its heart, a zombie story but in this case zombies are slaves to the living and a parody for the protagonist’s life. Billy Parsons is a Nippophile, using his love for all things Japanese as an escape from constant harassment by bullies and physical and emotional abuse by his father. But, he doesn’t just view Japan as his spiritual homeland, he wants to become Japanese. As story background, a zombie virus escaped the labs where it was created and successfully infects 10% of everyone exposed. It can be cured, but the damage to the brain is irreversible. The solution is to convert the victims to kyonshi by replacing parts of their brains with circuitry. Now they are worker slaves, performing the most menial tasks while living out a lengthy, emotionless life. The story rambles between Billy’s fantasies about being Japanese, his disconnected thoughts about kyonshi, his struggles with being rejected by the very people he wants to emulate because they view him as a pollution to their race, and his inability to ever come to terms with life. A very unsatisfying, nihilistic tale. It read like a lot of potentially interesting cultural and technological stuff was strung together to try and make a compelling story. I never cared what happened to Billy, but then his world never did either. Perhaps that was the point.

“The Oracle of Boca Raton,” by Eric Baylis, is about a huckster, Flores, giving “The Talk” to a rookie at the “Far Thinkers for the Near Future” facility, where “work” meant talking to dead sages and trying not to get obliterated by the Mad Priest. Of course, I had no idea what was going on until hints got dropped on the second page (halfway through the story). The world is falling apart, Florida weather is like this side of hell, and the whole venture originated with a scrapped government program once called Delphi. Perhaps Flores’ talk worked, but the story didn’t: It just . . . ended.

Jon Hakes’ “Wind Reaper” showed promise—a world trying to claw its way back from collapse, planes flying enormous wind turbines to harvest the energy from a hurricane, and on-ground wind farms suffering as a result. But the story ended before it really started. And, I had no idea what “he sees something that he has not seen in a long time” meant when Billy looks the town’s mayor in the eye and convinces her to let him and his crew go. I was seriously disappointed.

“It’s Not ‘The Lady or the Tiger?’ It’s ‘Which Tiger?’” by Ian Randal Strock, is a time travel paradox story—sort of. I’ve launched five businesses and watched them fail. Frustrated, I go to a local bar to get some bartender sage advice. We shoot the breeze for a time until the bartender must attend other customers. Then a stranger sidles up, looking familiar. Turns out he’s my grandson—mind you I don’t even have any kids yet—trying to convince me to come back to the future with him to enjoy a quiet retirement with my great-grandkids. He’s concerned because I die in two years after launching my sixth, and wildly successful business.

Okay, first, the ending doesn’t make any sense—there’s nothing compelling about either argument of stay or go. Second, if I went to the future and didn’t launch my successful business, then my children and grandchildren wouldn’t have the trust funds upon which they’ve depended, thus, their lives would change. So why would my grandson give that all up and, possibly as a result, lose all his own kids? Either there are missing pieces to this story or the plot wasn’t well thought out. And what exactly is the “Tiger?”

Lavie Tidhar’s “Whaliens” just shouts SPOOF. I loved it and got a few good chuckles out of it too. Whale-like space-faring aliens have come to Earth, demanding to learn our religions. If not, they will destroy everyone. (Nice, simple plot.) First, they ask to speak with the Mormon prophet, but relent when they learn he is dead. Then they ask about Scientology, but the story marks that out and explains “The following excerpt has been removed for legal reasons” (referring to certain tendencies by unnamed parties to resort to lawsuits in any disagreement). Then the Whaliens ask to speak with a Jew. Meanwhile, SF writers of the world are apoplectic. How can they write about possible alien cultures when the aliens are actually real? And, of course, the government collects all the best SF writers and cloisters them, demanding solutions to this alien problem. (Sadly, the author notes that the “heart-warming and emotionally manipulative story about a robot” was edited out.) This is the time when the cats of the world decide they must finally take over (people are already their willing pets) and solve the Whalien threat themselves. From here on, the story indulges in even greater spoofery, almost as if you’re watching one of the greatest Comedy Club acts of all time. Highly recommended, but, warning, it’s only for those who can laugh at themselves.