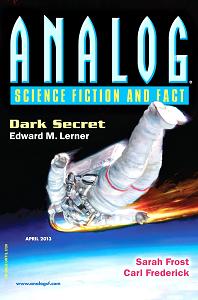 This issue of Analog contains a diverse selection of Fantasy & SF stories.

In Carl Frederick’s “The Lost Bloodhound Sonata,” Everett is a marine biologist with a fascination for all things olfactory. To facilitate his research, he builds an Aromachord, something like a crude piano that generates a wide variety of smells on command. Using his unique knowledge, he is challenged to evaluate a strange sea-creature that a hurricane washed ashore—a six-foot long giant worm with four leg-like tentacles, razor teeth and no eyes. He is teamed with an auditory specialist, Victor, who is both charming and a total pain-in-the-ass, supremely arrogant in his belief that he is the best scientist and all good ideas are his, even if he has to steal them. But arrogance has its price. When Victor steals the Aromachord to sneak into the vast cave system where these alien creatures live, his attempts to communicate lead to unexpected consequences.

I thoroughly enjoyed the unique olfactory point of view to this story, the idea of the Aromachord and the carefully crafted alien entity. It seems quite plausible that such a creature could lurk in the vast unexplored regions of Earth’s oceans. A good read.

“Altruism, Inc.” by Kyle Kirkland blends biopunk with a murder mystery, although the murder hasn’t taken place yet. Alexei Tate is a handle, a person hired to do difficult jobs whether they be investigations or assassinations. The world has recently survived an oil depletion crisis that has led to a near global economic collapse and profound changes in people’s behavior. Everyone learns to be traders. Nothing is done without an exchange of money or favors, and pardons can be bought, especially by the wealthy, to counter acts of fraud, assault and murder. While science has become the most respected profession, detective work like Alexei pursues is almost universally despised.

Because gene-insertion therapy never worked right, amitos–artificial mitochondria—are engineered to properly express altered genes to fix human weaknesses, diseases and disabilities. But something is going wrong. People with lots of amitos are beginning to experience physical breakdowns, and no one knows why. Alexei has to survive over-zealous security bots, goons intent on either kidnapping or killing him and the supposedly altruistic inventor of the amito before discovering a secret plot to genetically modify the aggression instincts of the entire human race.

This is a thought provoking and entertaining story full of lots of possible science and the gritty realities of a post-oil depletion world. A good read.

Jennifer R. Povey’s “The Skeptic” is definitely not your average aliens-encounter-Earthlings story. Charles is an expert in debriefing alleged alien abductees. But Dana, a welfare mother of three, tells of an encounter so out of the norm that even he begins to wonder. He discovers a micro-radio where Dana says she and her kids had met with the quasi-bird-like aliens, yet it’s no different than a standard security walkie-talkie. When Charles is woken late that night by someone talking thru the micro-radio, he goes to the alleged landing site to expose the fraud.

This story left me queasily wondering if we haven’t already screwed up first encounter without knowing it. A must read.

In “The Last Clone,” by Brad Aiken, Blake is a reporter who has managed to get an interview with the oldest, and once richest, man alive, Zeek Kuperman, once uber-czar of the entire health insurance industry. Zeek is dying, trapped in his cloned body. Not long after cloning himself, chronobots were discovered that could arrest all aging and disease, resetting every cell to the age of 21. Except the bots would not work on a cloned body and successive clones age very rapidly. Zeek blackmails Blake into killing him the same way Blake had illegally euthanized his father—six months before the chronobots were discovered. This time, though, Blake reaches a different decision, finally realizing what his father’s death had meant to his father.

A gritty sojourn into the realm of medical ethics and the personal angst every survivor faces as they helplessly watch a loved one dying in great pain. A solid read.

“Launch Window,” by Sarah Frost, follows Misty as she desperately seeks to find her sister and convince her not to leave on Earth’s first, and perhaps only, starship. Natalia is Misty’s only surviving family. To reach her she must endure a long space elevator ride, a shuttle to the moon, then a harrowing ride strapped next to the fuel tanks of a cargo ram. But when a bureaucrat arrives with the documents to terminate the star mission, Misty’s love for her sister shows its true nature.

A hard tale about the power of love. A recommended read.