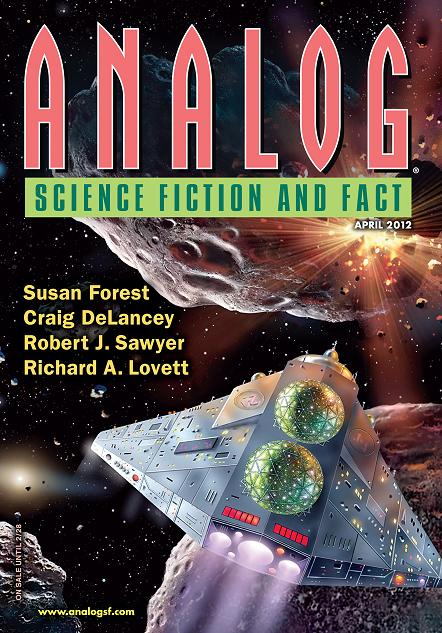 “The Most Invasive Species” by Susan Forest
“Ecce Signum” by Craig DeLancey
“A Delicate Balance” by Kevin J. Anderson
“Follow-Up” by Stephen L. Burns
“You Say You Want a Revolution” by Jerry Oltion
“To Serve Aliens (Yes, it’s a cookbook)” by Eric James Stone

“The Most Invasive Species” by Susan Forest

Our interference always proves our ignorance, at least in science fiction. In “The Most Invasive Species” the author presents a situation where obvious cruelty, something we as humans consider justification for intervention, results in more harm than good.

On a distant planet a scientific colony is thriving. It has been there for generations. The locals are small, nomadic creatures that may resemble humans in some ways, and they do speak and comprehend speech, but their ideology differs from ours in a drastic way. They reprimand even their smallest children with violent physical abuse, biting, kicking, scratching, hitting. Seeing this happen, one of the protagonists interferes.

I guessed the ending about halfway through, so the second half of this story seemed to drag, taking far too much time to culminate. Good descriptions. Believable characters.

Weak writing:
Karen looked expectantly –
I was sitting –
Dan and I were sitting –
I could tell —

Strong writing:
Lem, the nomad who’d brought his family to town, bent over him, fangs bared and fist raised.

The smell of wood smoke and the hum of distant harmonies underlay a perfect evening.

Her little ribs seemed so fragile beneath my big hands. She gripped my shirt, screaming as though I was trying to submerge her beneath choppy waves. I had to pry her fingers from my hair.

I would have enjoyed this story had it moved along at a faster pace, before it revealed too much by all the obvious clues. However, I like the story in general.

“Ecce Signum” is a futuristic mystery. I love mystery and suspense, so I enjoyed most of this story. The author has done his research when it comes to brains, brain surgery and imaginary futuristic technical devices.

We begin with a murder scene. The forensics team has left and taken the corpse with them, leaving a chalk line where the body was found. Another chalk line in a nearby hallway outlines where the victim’s dog died a similar death. In this story, dogs are much more than silly, slobbering companions. Neo-dogs transmit their thoughts the same way most people do in the future, through teep chip implants. When our protagonist, Janet arrives home, she is met by her loving big black neo-shepherd named Juno who says, JANET JANET JANET JANET HOME JANET HOME. To me, that is believable dog talk. I loved all the dog talk in this tale.

Disappointing writing:.
I tilted my head skeptically.
He got up suddenly and started pacing.
You could tell . . .
I could see  . . .

Intriguing writing:
It portrayed, as always, a geosynchronous live shot of Earth taken from directly above.

A red stain of blood had dried over most of North America.

Ceramic bullets ripped through the fading leaves of autumn vines, making a patter like rain.

This assassin had a commissurotomy.

People like me, without a chip, were becoming like people living off the grid: oddball fringe types.

Janet, her dog Juno and friend, Edgar already know why the murder happened and probably who is next on the assassin’s list, and they even have a good idea who the killer was. Finding the killer is secondary. Their goal is to complete their mission before the assassin’s employer eliminates them too, ensuring the destruction of their cause and their mission. Clever. I enjoyed this tale.

“A Delicate Balance” offers up a dilemma. What would you do if you were a young, female colonist on a very distant planet where the maximum population absolutely, positively must not exceed 174 people, with no exceptions? Unlike our protagonist, Berinda, I would absolutely, positively not get pregnant, because the oldest or most expendable person within the colony will be euthanized the moment the baby is born.

Upon their initial arrival, the bleak circumstances were discovered by their brave leader, Captain Tyrson. He recalculated several times and came to the same conclusion and the resulting grim decision. The colonists numbered nineteen too many for all to survive. He eliminated himself and eighteen others without hesitation.

The remaining 174 colonists are hunkered down inside a minimal survival encampment. The air outside is toxic and is too concentrated with chlorine for even the hardiest earth algae to grow. It will be several decades before the main ship arrives with additional material to build a more permanent, more sustainable encampment.

Birenda realizes that her unauthorized pregnancy has insured the death of her own father and has forced her into a marriage with the child’s indifferent father. Birenda knows that if another person dies unexpectedly, her father and her child can both live. Like Captain Tyrson did, she makes a desperate decision.

The writing is good and the situation is intriguing, but the story could have benefited from more interaction between characters. More scheming and deception would have provided intrigue. Somewhat of a surprise ending.

The following review of Stephen L. Burns’ story “Follow-Up” includes thoughts and text by both Sherry Decker and Dave Truesdale, as it is felt this short piece may offer the reader more than the readily apparent front story.

Thanks to miraculous techno-surgical aids in this imagined future, and during an unnamed War, Dr. Sissy Alvarez finds herself a blessed surgeon. She skillfully guides the miraculous machines at her disposal as they repair otherwise mortal wounds from soldiers sent back from the front. Punctured lung? It’s repaired and growing replacement tissue in moments. Leg blown off? She can fix that with an apparently limitless supply of stem- and replicells. She even commands a machine capable of constructing new limbs with real flesh and blood by copying the remaining leg or arm right down to the last hair.

Dr. Alvarez performs her job admirably as the bodies stream in and out, day after day after day, horribly wounded and then whole once more, quickly back to the War. After time, they all look alike to her. Then one day comes a wounded soldier with a Wizard of Oz tattoo on his remaining leg. It is the only thing separating him from many others, and like the others he is in and quickly out to fight once again. He is soon forgotten as the monotony of Alvarez’ routine numbs her. Throughout the story Burns emphasizes the fact that she is becoming dehumanized, with words like “robotic” and the word she herself uses to describe herself:  “Dr. Autopilot.” She is troubled that even she does not know if she has treated the same hapless soldiers more than once. Until, near the end of the story, she realizes her nano-machines have created a mirror replacement limb (with the good leg for a template) for a soldier who has had his leg blown off — with a Wizard of Oz tattoo “edited” out.

At this point it is obvious that the front story is about the dehumanizing aspects of War, and how they may become even more so with the advancement of medical technology to the point where wounded soldiers can be “fixed,” then shuffled off to the battlefield following serious injury sooner than ever before. Like meat.

However, this theme is strongly reminiscent of William Tenn’s classic novelette “Down Among the Dead Men” from the June 1954 issue of Galaxy (collected in the first of his six short story collections Of All Possible Worlds). In Tenn’s oft-reprinted story the wounded soldiers (again through advanced medical technology of a quite different sort) are patched up and sent back to the front, but with their previous personalities erased and new ones implanted (of famous warriors). Body parts (inner and outer) have been replaced so many times that little is left of their original bodies. Like the Burns story, after a time little is left of their original humanity on the physical level. In Tenn’s multi-layered and scathing satire, however, they are known as Zombies — the walking dead. Stripped both physically and mentally of their humanity bit by bit, they are naught but meat for the War.

“Down Among the Dead Men” focuses on the dehumanization of the soldier in a more straightforward manner than does Burns’ “Follow-Up,” where Burns shifts the focus to the dehumanization of the medics (in this case Dr. Sissy Alavarez) who must continuously mend the torn bodies of the nameless soldiers who pass before her magical machines in assembly line fashion. Until, that is, a brief glimpse of a tattoo near the beginning of the story and then quietly once more near the end, reminds her (and by extension us) of that which War inevitably steals from so many. Much shorter and with less bombast perhaps, than Tenn’s classic “Down Among the Dead Men,” Burns here (whether he was aware of Tenn’s story or not) reprises this timeless theme from the opposite perspective than the Tenn.

The most important aspect both stories share is their portrayal of the dehumanizing aspects of war. In both stories the soldiers are physically stripped of their original body parts, their physical humanity. In “Down Among the Dead Men” it is the soldiers who become “Zombies.” In “Follow-Up” it is a doctor who becomes “robotic” and “Dr. Autopilot.”

The late Martin H. Greenberg called “Down Among the Dead Men” “…one of the most powerful anti-war statements in science fiction.” While “Follow-Up” admittedly doesn’t rise to this level due to its alternate focus and much shorter length, it nevertheless succeeds on its own terms.

Weak writing:
. . . she said as she tossed the cup into the waste bin and stepped up to the scrub station.

It was easy to hear over the almost criminally innocuous mashuclassical music playing quietly in the background.

She finished up with that patient and worked quickly and efficiently on the ones who followed.

“You Say You Want a Revolution” by Jerry Oltion

This is a political discussion and debate from start to finish. You’d assume all creatures would learn from their mistakes and from history, wouldn’t you, but in the future it seems humankind remains idiotic. As we travel outward beyond the stars to discover other worlds, other ecosystems and other philosophies, our ignorance persists. But then, without pride, greed, vanity, and a thirst for control, there would be no fiction or non-fiction.

“You Say You Want a Revolution” is about humans learning the history of an alien civilization on a distant planet, the hard way.

Not a very fascinating, new or memorable tale, except perhaps for the population control method used by the aliens. That’s where the humans get into trouble.

Recalling Damon Knight’s classic “To Serve Man,“ this is a clever break from the excessive efforts of several previous stories in this issue.

Entrée – Berundi Cucumber Cordon Blue
(Be prepared to take a stunner with you while collecting these ingredients.)

Dessert – Berundi Elephant Mousse
(As it turns out, there are politics involved in this short bit also, but not enough to ruin one’s appetite, assuming you can stomach the ingredients.)
Amusing.