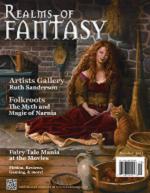 Friends, readers, countrymen, I come to bury Realms of Fantasy, not to praise it. No, wait. That’s not right. Let’s try that again without the Shakespearean intrusion. Take two.

Once again, we gather to say good-bye to Realms of Fantasy. As of this issue, for October 2011, RoF is ending publication. Again. RoF has had an up and down relationship with readers, in that there never seemed to be enough of them. Which is a shame, as RoF had some of the best general fantasy short stories around.

It always hurts when another magazine, a showcase for the short fiction on which the genres we love were built, ceases publication. I’ll miss RoF especially, as it always had room for a different kind of fantasy. It wasn’t all elves and fairies. Even though RoF is closing up shop, we’ve still got the back issues to read and some wonderful stories to remember.

Before RoF sails beyond the sunset and into the twilight lands of publication limbo, we still have one last issue to discover. In “Return to Paraiso” by Rochita Loenen-Ruiz the people of a small village have been relocated away from their beloved seashore and deposited on a man-made plateau, far from home. The village lives under an oppressive regime, but one young woman, Esme, leads them in protests and actions to try and improve their lives.

Esme is labeled a dissident and escapes into the mountains. After months away, a convoy of soldiers returns to the village with a pregnant Esme riding alone in a truck. The soldiers build Esme a cage and then disappear, only one soldier remaining and the rest seemingly replaced by a fecund jungle of fruits and vines.

Told in a manner reminiscent of the best fairy tales or morality lessons, the story of “Return to Paraiso”  flows along like a gentle river, capturing our interest and taking us all for a subtle ride. Along the way, there are wonderful sights to see and sensual odors to smell. There really is no major conflict, as even a firefight is a foregone conclusion.

Still, in this case, the journey along that gentle river is the wonder to be sought and leads us not to worry about the destination.

The next story, “The Man Who Made No Mistakes” by Scott William Carter doesn’t start promisingly, in that it opens with a mysterious young man giving a strange confession in the late hours of the night. It’s not the most common of several stereotypical plots, but it’s right up there. Carter had to work pretty hard to come up with a way of offsetting that poor choice to open the story.

For the most part, I think he pretty much succeeded. Father Holder is that staple of fiction, the Catholic priest who has lost his way. He’s awakened by a young man named Michael Palmer, who tells him an astonishing story. Palmer, according to his story, has the ability to switch back in time so that he never makes a mistake. No matter what he does, he can undo it by going back in time.

When Michael discovers that a woman he really likes won’t even consider seeing him again because of his skin color and what her daddy the senator would say, Michael decides to kill her and watch the senator suffer. Killing the woman, though, actually has amazingly good benefits for the world at large. Now Michael must answer the question of whether or not committing a sin is counterbalanced by the good that sin achieves for others.

With an intriguing premise like this, I thought Carter had a pretty good story going. My only problem with it was the hoary choice of having Michael confess his actions to the priest; it was too trite and outdated. A worthy attempt, but, ultimately, a failure.

When a ghost shows up in your kitchen, that’s usually a sure sign that there’s something appalling about to go down. Not always, however. In “Second Childhood” by Jerry Oltion, Mazie is kneading bread dough in her kitchen when she senses a presence behind her.

Once she’s secured a very large and very sharp knife, she turns around and finds, not an intruder, but her mother, young, healthy, vibrant and very much alive after being dead for the past decade. It is, to say the least, a bit of a shock.

The impossible and impromptu family reunion only grows when Mazie’s daughter and husband return home. Mazie’s mother sticks around for a few days, each moment expecting to disappear back from whence she came. The reason for her appearance, when we finally discover it near the end of the story, is a delight.

As always, Oltion, a past winner of the Nebula Award, weaves a mean yarn. The scene in which little Gina meets her formerly dead grandmother is especially priceless. Gina first wonders if she’ll get some of the cinnamon bread and then asks her grandmother if she can take the revenant to school for show and tell. That’s good stuff.

The rest of the story is almost as good. This funny and endearing story of loss and acceptance is truly a wonderful piece to have in this last issue of RoF.

Corrie’s mom lay with a man and then became pregnant. Being a young girl herself, Corrie’s mom set Corrie out by the highway for the Roadsouls, the roaming families of tinkerers and crofters. Corrie lived a happy life until she developed the urge to stop, to see the same thing out a window more than once. She left the Roadsouls and hired on as an inkeeper’s assistant with a woman named Neely.

Neely’s inn has been standing there for thousands of years. Next to Corrie’s small cubby is a giant hearthstone that had been in the inn for all those thousands of years. As Corrie lies sleeping on the hearthstone, she gradually comes to realize that there is both more and less underneath it than she was led to expect.

James writes a wonderful story, told with flair and verve by a sassy narrator who is struggling to find out just what it is she wants. Corrie is a wonderfully appealing character and her struggles with her self-definition, mostly in defining just how high up her skirt she wants to allow the hands of any boy, are fun and filled with the right measures of doubt and desire. This is a good story and certainly lives up to being RoF‘s last cover story.

In this post-Toy Story world, the idea of thinking toys coming to life when people are out of the room isn’t all that shocking. And, considering just how wonderful the Toy Story movies were, an author would have to have a great deal of intestinal fortitude to attempt such a story. That said, I give you “Barbie Marries the Jolly Fat Baker” by Nick DiChario, a story in which toys suffer the Little Death when their quantum state is collapsed by the observation from humans. With no humans in the room, though, these dolls come to life and move and think on their own.

Instead of a spaceman and a cowboy, this story deals with the Paladin, a chivalrous knight who would slay dragons if only little Tony actually had any dragon toys with which to play. Paladin has fallen in love–chivalrous love (which foregoes physical acts for unrequited love) with the Princess. Princess Barbie, though, has needs; needs that can only be physically fulfilled by lying with the Jolly Fat Baker.

After talking over his frustrations with Jake, the family dog, Paladin attempts to make a break for freedom. His quest, he decides, is to find out what a doll’s existence is really all about and if the way they are made is the sum and total of what they can be.

“Barbie Marries the Jolly Fat Baker” is a well-told story that sets up and follows the intricate rules of doll existence quickly and efficiently. Paladin’s conversations with Princess Barbie, the Jolly Fat Baker, and Jake the dog were fun and funny and great fun to read. However, the spectral presence of Buzz and Woody (who don’t even need more names or other descriptions to be instantly known) hang heavily over every aspect of this story.

On its own, I thought it was a nice little story, a cute bit of fluff and diversion told in an entertaining manner. Unfortunately for the story, it really can’t be contemplated on its own. It’s an okay story, but it’s no Toy Story, and that’s definitely to its detriment.

With this we say farewell to Realms of Fantasy for possibly the last time. For seventeen years, RoF has been delivering some great (mostly) bi-monthly doses of the best fantasy short fiction the field had to offer. The magazine will be missed, but I have the feeling we’ll be hearing from these authors again.