“Cutter in the Underverse” by Daniel Hood
“Middle” by Eilis O’ Neal
“Fall Of The Moon” by Jay Lake
“Saint’s-Paw” by Alan Smale
“Halloween: Comprising a Cautionary Acrostic of Nine Bedtime Stories for Reading to the Tiresome or Disobedient Child” by Euan Harvey

Loners, in various forms, drive each of the stories in this issue, with mixed results. Daniel Hood’s multidimensional tale “Cutter in the Underverse “opens the fiction section for the October 2010 issue of Realms of Fantasy. When one is a gambler, one doesn’t want somebody buying up your markers. Once they do that, they own you. Such a move always signals trouble. It certainly does for Detective Pat Cutter as his markers all over the New York City area have been bought up.

His job through the “Miscellaneous Events” dept of the NYPD means his salary can’t cover his recent losing streak if everything is called in at once. He also knows that the person buying his markers has to be in the “Underverse” – a sort of parallel dimension where the past lives on trapping those who bumble in and become enthralled, as well as those deceased who can’t get out for various reasons. Cutter knows that all he can do is wait for the call and then do whatever his marker buyer wants.

A highly atmospheric and interesting story rather vague on specifics gradually loses steam and ends weakly. It isn’t easy to pull off a story where the characters are doomed to repeat the past over and over again.  Daniel Hood gives a good effort and comes up just a little short for this reader.

Such is not the case with Eilis O’Neal and her story “Middle.”  The difficulty of being the middle child and feeling ignored by the family is not a new concept. However, Eilis O’Neal puts a fresh spin on the underlying concept by way of dreams. Addy, the older sister of the narrator, fell asleep five days ago and hasn’t woken up since. Her dreams appear on the ceiling of her bedroom allowing all to see what she is dreaming.  A few make sense, according to the young narrator, while others are just mixed up nonsense and strange.

The young narrator first tries to make some money off her sister’s dreams by charging neighborhood kids money to come look at the dreams while they float against the bedroom ceiling. That plan is soon thwarted by her younger brother, Jake. He has his own issues as his best friend and companion is a werellama named Clyde that no else can see. But, Clyde does apparently exist as he leaves signs of his passing. Either that or Jake is faking things really well.

As the days pass with Addy continuing to sleep and publicly dream, the family begins to disintegrate. The young narrator finally concocts a plan to set herself free in the only way she knows how in this good story.

Equally good, for very different reasons, is the next tale titled “The Fall Of The Moon”  by Jay Lake.  Family is key here as well and serves as the anchoring backdrop to the tale of a young man given a mission by his deceased grandfather. Hassan is to build a boat using the bones of his grandfather and other materials, and sail across the very strange Sea of Murmurs. Time is of the essence. Books are knowledge and Hassan uses the last book in existence to survive what is in store for his village. This is a powerfully good story that touches on many themes while spinning its tale.

The relic in the church means nothing to Rachel when she runs into the church to escape the pursing soldiers. Falsely accused of being a witch, her curiosity has put her life in extreme danger. The local priest isn’t about to intercede on her behalf. Her final stand will be limited to what she can find on hand in the church, and her own wits. Too bad she doesn’t believe in god, the church, or the hand of St. Stephen.  Faith and lack of same plays a major role in “Saint’s-Paw” by Alan Smale.

The fiction offerings in this issue conclude with “Halloween: Comprising a Cautionary Acrostic of Nine Bedtime Stories for Reading to the Tiresome or Disobedient Child” by Euan Harvey. This story primarily consists of what could be considered as nine flash stories that share the common theme of fears of Halloween and childhood monsters.  Weak throughout, the story is of the type that has been done to death. The only difference here are the players and what happens to them. Hugh finds the terror beneath the bench at the mall, Andrew gets with the wrong group as they Trick-or-Treat in the neighborhood, Liam proved to daddy that there are monsters under the bed, etc. The nine tales eventually lead to a disturbing reality that seems to be a long way to go for little effect. Much like the opening story, the ending here is also clichéd and weak. 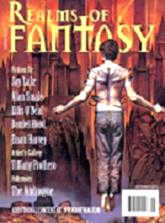 “Cutter in the Underverse” by Daniel Hood
“Middle” by Eilis O’Neal
“The Fall of the Moon” by Jay Lake
“Saint’s Paw” by Alan Smale
“Halloween: Comprising a Cautionary Acrostic of Nine Bedtime Stories for Reading to the Tiresome or Disobedient Child” by Euan Harvey

Cutter is a cop, a detective and one of New York’s finest and he also has a gambler’s problem.  Not a gambling problem, a gamblers’ problem – someone has been buying up his markers, presumably to get some leverage on him.  The source of the problem is coming from his main beat, the Underverse of New York City.

Daniel Hood, in “Cutter in the Underverse,” creates a part of New York City that’s peopled by ghosts and monsters.  The entities that live there are mainly from New York’s past and represent, in most cases, things that couldn’t be let go of.  They occupy buildings that may have been torn down long ago but that Cutter can seek out and walk into as required.  Cutter is the only policeman, the only human, who can deal with this parallel reality.

It’s a good detective story and it also reflects the dynamic of a world of trapped souls.  New York City itself becomes a character and the author treats it like he’s in his own back yard.

Jenny is the middle child, a junior in high school who has a ten year old brother, Jake, and an older sister, Addy, a senior at Jenny’s school.  Eilis O’Neal in “Middle” provides a middle class town where some dogs, as a matter of fact, are born with wings and vacations can be booked that involve time travel.  Jake has an imaginary friend and Addy has been asleep for eight days.

Addy’s condition is troubling, but it will supposedly pass if she is kept in a quiet environment.  In the meantime, while she sleeps, she’s projecting her dreams on the ceiling above the bed which anyone can watch.  Jenny watches them, eventually offers tours to the neighbourhood children and, after she gets caught, gets involved with the boy next door.

As the story progresses Jenny experiences more of the stuff that falls on the middle child when a family is in crisis.  She assists in crisis management but gets no closer to her parents; their attention is on Addy.  Jake is spending more time with his imaginary friend. This leaves Jenny more or less alone to create her own solution.

I liked the story.  The ending is both effective and appropriate and gives us a lot of the drama that can swirl around the middle child, but the reader can still feel a little cheated of a happy ending.

Jay Lake, in “The Fall of the Moon,” creates a place where only the bones of the dead provide a way out.  Hassan lives on a beach near a small village next to an ocean which hasn’t been crossed by anyone.  His uncle has burned all of the books in the village library but Hassan finds one remaining in the possession of his recently deceased grandfather.  This book provides instructions on how to build a boat by using human bones in strategic locations.  The building of a boat requires sacrifice.

As the story progresses, the sea begins to act up and Hassan’s uncle attempts to keep him in the village by reminding him of what he could have there for his own: home, and a family. But Hassan continues his work.  When the boat is finished the journey must begin.

The story isn’t really my cup of tea because it lacks the strong narrative of the first two.  On the other hand the author does accomplish what he set out to do for the sake of his main character, but loses the overall theme in the end.

Rachel, a young girl being pursued by soldiers, takes refuge in a church; heresy means death, but just what has she done?  The church she enters is the Church of St. Stephan, the hand.  Alan Smale in “Saint’s Paw” creates a character with a progressive attitude living in medieval times.  St. Stephan was martyred over a century ago – his body drawn and quartered.  One of his hands lies on display near the altar.

Rachel finds sanctuary in the church, but it’s only temporary.  She must convince the priest to help her or eventually face the wrath of the soldiers waiting outside.  As the story progresses we learn more about Rachel.  Through the priest we learn more about the society she lives in – the attitudes she faces.  The Martyrdom of St. Stephan also turns out to be strangely relevant.

The story works pretty well.  Smale gives us in Rachel a strong character that I couldn’t help feeling for.  Born into a repressive society Rachel’s natural instincts get her into the kind of trouble that can’t be easily forgiven and make her the legitimate prey of a group of soldiers.  It’s definitely worth a read.

“Halloween: Comprising a Cautionary Acrostic of Nine Bedtime Stories for Reading to the Tiresome or Disobedient Child” by Euan Harvey.  Is a collection of nine very delightful stories that won’t suffer from being read at bed time by anyone.

Some are very traditional:

“L is for Liam who lies in his bed with his eyes wide open, staring at the ceiling and trying not to listen to the sounds coming from under his bed.”

And some are a little more mature:

“…Lucy doesn’t hear as her phone drops from her nerveless fingers and the door to her bedroom swings slowly open.”

The title hints that these stories should scare the heck out of disobedient and tiresome children.  I think that they’re just delightful.