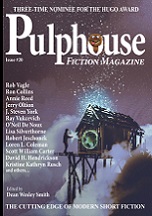 “A Game of Virgins” by Lisa S. Silverthorne (reprint, not reviewed)

“Fancy Names for Blue” by Rob Vagle (nongenre, not reviewed)

“All About the Ball” by Ray Vukcevich (reprint, not reviewed)

“The Tiger in the Tub” by Kent Patterson

“It’s Not What You Know” by O’Neil De Noux (reprint, not reviewed)

“There Was Enough of Her” by Scott William Carter

“Friends of Steel” by Jason A. Adams

“The Scents of Compulsion” by Jerry Oltion (reprint, not reviewed)

“The Case of the Shorted Circuit” by J. Steven York (nongenre, not reviewed)

“Eating It Too” by Kristine Kathryn Rusch (reprint, not reviewed)

“Disco Dani and the Bad Penny” by Annie Reed (reprint, not reviewed)

“Show Me Yours” by Robert Jeschonek (reprint, not reviewed)

The nine new tales of science fiction and fantasy in this issue range from surrealism to futuristic adventure, with more than a little whimsey and heartbreak thrown in for good measure.

The title of “The Tiger in the Tub” by the late Kent Patterson, whose works continue to be newly published nearly three decades after his death, is quite literal. The big cat appears out of nowhere in the bath of a man who works in the advertising business. The tiger communicates with the fellow telepathically, demanding a piece of his body to dine on, in retribution for using animals of its kind in commercials. The adman tries to escape with life and limb intact.

This is a silly story, with a touch of satire of Madison Avenue. Since it was written several years ago, subtle allusions to things like Tony the Tiger and “Put a tiger in your tank” are likely to be lost on younger readers. Older readers may get a nostalgic chuckle out of it.

The main character in “Making Excuses” by Ezekiel James Boston works in a strange realm of abstractions, which also contains entities such as the Tooth Fairy and Santa Claus. His job is to literally manufacture excuses for folks in the material world. He comes to the aid of a fairy who prefers to create something else entirely.

This bizarre fantasy world is certainly original, drawing one into the story. The plot depends on the literalization of a common phrase containing profanity. Some readers may find this out of place in an otherwise whimsical tale.

In “Time Map” by Robin Brande, aliens arrive on Earth to share their knowledge with humans. After learning everything he can from them while working in a secret government facility, the protagonist helps them with their own problem, at the risk of his freedom and possibly his life.

The aliens seem more like Hollywood’s version of extraterrestrials than serious visions of what life might be like on other worlds. Like many science fiction movies, it appeals more to the emotions than the intellect. The characters are appealing, even if there are no surprises in the plot. Some readers may find part of the premise overly mystical.

“Saucermen and Silk Scarves” by Loren L. Coleman features a team of pilots who battle regular attacks on a human colony world by alien vessels. As the invaders develop more advanced ships and weapons, the defenders evolve from a ragtag bunch to an organization with full military discipline.

I’m not quite sure what the point of this story might be, other than the change noted above. Perhaps the title hints at an analogy with the difference between the romanticized flyers of the First World War and modern air forces. In any case, the bulk of the text consists of detailed descriptions of space battles. Fans of technological war stories may find these of interest, while others are likely to be bored by them.

“There Was Enough of Her” by Scott William Carter is a brief account of a schoolteacher who tries to protect her young students when an alien spaceship arrives. It is possible that the invasion is imaginary, although this is not stated explicitly. In either case, this is more of a character study than a fully developed story.

The main character in “Friends of Steel” by Jason A. Adams has lived alone in an automated factory since childhood, after an unspecified apocalypse. It is possible that he is the last human being left alive. His only companions are the factory’s robots, which he tries to maintain so they can keep performing their now-useless tasks.

There is little plot in this melancholy story, which ends as one might expect it to. The man’s situation and attitude add a welcome touch of pathos.

In “Dogsurfing” by Olivette Devaux, a man discovers that he can harness the mystic power of excited dogs, created when they chase objects in play, to levitate himself a short distance. There is little to this story other than the odd premise, which is treated seriously rather than for comedy, as one might think. This quirky tale will best appeal to dog lovers.

“The Lunar Council Cares” by Ron Collins is a very short, satiric account of a man running into all kinds of government red tape when he simply tries to buy a snack at a transportation hub on the Moon. The story’s mockery is clearly aimed at overly protective nanny states, so one’s political opinions may determine how one reacts to it.

“Eternal Bond” by R.W. Wallace is the latest in a series of stories about a pair of ghosts, confined to the cemetery where they are buried, who help newly arrived spirits take care of unfinished business with the living, so they can move beyond the spectral state. In this tale, they struggle to convince a dead woman to let go of the strong connection she has with her identical twin.

Although some of the entries in this series resemble detective stories, there is no mystery involved in this one. The powerful link between the sisters provides the work’s emotional power. As with the rest of the series, this moving work is written very well, with fully developed characters and evocative descriptions.

Victoria Silverwolf is not a dog lover.