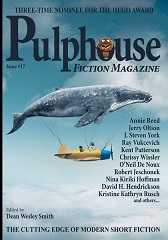 “Ascent of a Lifetime” by Karen Aria Lin

“Between a Sock and a Hard Place” by Teri J. Babcock

“Another Body” by O’Neil De Noux (non-genre, not reviewed)

“Murder by Voice” by Kent Patterson (non-genre, not reviewed)

“It Came from the Coffee Maker” by Martin L. Shoemaker (non-genre, not reviewed)

“Locks and Keys and the Truth at the Heart of It” by Dayle A. Dermatis

“The Diaper Room Key to Cosmic Plumbing” by Brenda Carre

“The Case of the Missing Semicolon” by Christina Boufis (non-genre, not reviewed)

“This World We Live In” by Chrissy Wissler (non-genre, not reviewed)

“As If Nothing Had Happened” by Jerry Oltion

“Death of a Woman of Ill Repute” by Annie Reed (non-genre, not reviewed)

“The Asteroid That Stays Crunchy in Milk” by Robert Jeschonek (non-genre, not reviewed)

“Minions at Work: Handled with Carelessness” by J. Steven York (non-genre, not reviewed)

The 17th issue of Pulphouse has twenty-two stories, ten of which are in the speculative genre, and one of these is a novelette. All the speculative stories were interesting.

He is the superhero who runs blindingly fast in this short fantasy. He could run around the world seven times in a second, which was the speed of light. And he is a member of the Honor Brigade, though the other superheroes don’t give him much credit for saving the world. After all, he is only a really fast runner.

But someone realizes he is the most powerful member of the Honor Brigade. And they think they can strip away his powers by killing Kathy, the wife he loves and the woman who shares in the full experience of his speed. He doesn’t think of himself as an intelligent man, but soon he will work out who set things up, so a petty criminal could kill Kathy.

This was an unusual story that was more of a description of how his skills worked. But the light prose style kept the reader engaged until the story’s purpose revealed itself.

This short fantasy explores the world of Benjamin, a psychic shoe shiner who gets a vision from anyone who stops at his station. Sometimes he tries to help, and sometimes, the vision is too graphic.

But when Persephone stops to have her blue shoes shined, Benjamin’s life takes a strange turn. His visions usually involve their lives, so he is shocked when the images he sees include himself through her eyes. And the scene isn’t pleasant.

“Uncomfortable Shoes” was an unusual snippet of a tale that gripped the reader from the first line.

“Ascent of a Lifetime” by Karen Aria Lin

The last successful Ascender calls on the local librarian to climb the cliff called The Last Man Standing in this short fantasy. Kai Yuan has never considered climbing before, but something in the last Ascender’s words convinces her to dedicate two years to learning.

If she can reach the top, what will she find there? The only three Ascenders won’t say. Kai Yuan hopes it is riches to help her poor family eat well and her brother complete his doctor’s training. After two years of practicing, she has seen four boys try and fall to their deaths. Now it is time to begin her ascent.

The author has crafted a story that transcends normal writing. The plot and prose melded together perfectly to create a captivating story.

Everyone woke as some form of candy in this short fantasy, including David, the detective. David likes the change, the smells are delicious, and he’s no longer hungry. However, crime still happens, and he is called to investigate a murder.

A milk chocolate bar was killed, chopped up, and is now melting in the sun. David sets about doing his detective thing, ignoring the unexplained sounds of rock candy children playing nearby. But when he discovers the melted bar was once his boyfriend, the case takes an even stranger turn.

This whimsical story needed some meat on its bones.

“Between a Sock and a Hard Place” by Teri J. Babcock

Socks have a life of their own in this off-beat short fantasy. Reese finds his socks are not just moving about the apartment, but they’re birthing tiny baby socks that grow. Like someone who has suddenly stumbled on a new hobby, he searches for more information.

Soon he has a little cottage industry going while his skeptical wife watches, unsure how to dissuade him. When Reese discovers how the socks eat, he’s disgusted but then sees new possibilities opening. It is about then when his cottage hobby gets the attention of others who aren’t so pleased.

This curious and somewhat quirky story maintained a good pace and had a kink in its sock’s tail.

“Locks and Keys and the Truth at the Heart of It” by Dayle A. Dermatis

This short fantasy takes place in Hollywood as a promising actress has her one-on-one meeting with a film producer. She has asked that other staff be present for the meeting in a lavish hotel suite. After all, she knows the risks she’s taking.

She isn’t surprised when the producer’s staff are called away for an ‘emergency.’ The game that has been played for decades is about to begin. But this time, she has some tricks of her own.

Though this morsel of a story had a pleasing twist at the end, it lacked much speculative action.

“The Diaper Room Key to Cosmic Plumbing” by Brenda Carre

Alice is a lawyer in desperate need of a bathroom in this horror short. She’s at her favorite Java Hut demanding the bathroom key while the homeless people look on. New construction surrounds the Java Hut, but Alice doesn’t care. She only needs the bathroom.

Inside, the bathroom is spotless, though it gives Alice the creeps. It is after she washes her hands at the sink that the monster begins flushing itself out of the urinal. In desperation, she escapes, only to find herself surrounded by the homeless people claiming she must go back in to finish what she started.

This was a bizarre story that was a pleasure to read.

Harvey lives among the coral of Australia’s east coast in this short fantasy. He’s lived for a long time in octopus terms and has significant experience with human predators. In his seven years, Harvey has come to the realization that he needs to kill these humans who consider eating a live octopus a delicacy. And, with the help of Thelma, the shark, he has a good plan.

Swann’s story was short and funny but didn’t contain much speculation beyond dealing with an intelligent octopus.

Robert and Clothilde are ghosts who can’t move on in this fantasy novelette. They have been stuck in this French cemetery for thirty years as new ghosts arrive and move on once they’ve resolved any unfinished business. Robert has no idea what his unfinished business is, and no one comes to visit his unmarked grave.

Then a sudden surge in deaths causes ten funerals in as many days, and now the cemetery is full of ghosts uncertain about their unfinished business. Robert tries to help them find what is holding them back because visitors to the cemetery are scarce during the suddenly imposed lockdown.

This story’s prose was nicely crafted, though the story’s mysteries were easy to work out.

“As If Nothing Had Happened” by Jerry Oltion

When Dennis becomes suspicious of his wife’s faithfulness, he takes action in this SF fantasy set in the near future. Much more information is available to ordinary people, and Dennis soon proves his worse fears are true.

He confronts his wife mid-dalliance and exacts some level of retribution. But in this future, how can he patch his marriage back together?

There was little mystery to this story as it followed a predictable path through a common situation.