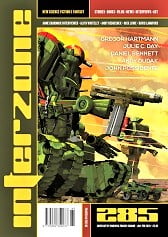 “Each Cell a Throne” by Gregor Hartmann

The 285th issue of Interzone has five original stories, including 1 novelette.

“Each Cell a Throne” by Gregor Hartmann

This short SF portrays Philippa trying to convince Regis, who is near death, to backout of his deal to have his mind uploaded. Regis is wealthy and weak, relying on an exoskeleton to move around. Regis’ fourth wife hires Philippa, an off-duty cop, to convince him to live until his natural death.

Philippa needs the money to keep her own brain-dead mother alive but she’ll only get paid if she succeeds. She tries philosophy, biology, and even religion; will anything get through to Regis and save two lives?

Hartmann’s characters were believable, and this helped to keep a slow-moving story interesting.

Immie keeps a remote airfield ready to use in this SF short. The airfield is a contingency in case they need to fly an anti-viral sprayer there as it’s part of the defence against the spread of the gene-altering virus that’s killing people in the cities. Those people who are still alive practice safe hygiene, avoiding almost all body contact.

One day her company sends in a crew to improve the airfield as the virus gets closer. Immie meets and falls in love with a flyer on the crew, but they’re only together for two weeks before the crew moves on. When Immie sees a rash developing, she wonders if it is hives from stress, or something else.

This short story’s prose flowed well, but the pace and the mystery didn’t support the length of the tale.

His brother, Frankie, was a popular voice of reason during the war in this SF short set in a dismal future. But now his brother is dead from a lingering disease and Frankie’s brother returns from the front lines to come to terms with his brother’s passing.

Back in his hometown the brother finds devotees camped outside Frankie’s mountain cabin, mourning him and seeking understanding about his younger life. The pessimistic brother struggles with the unwanted attention these devotees lavish on him.

The prose was stylish, but the plot lacked any mystery, intrigue, or action to keep the reader fully engaged.

A millennium ago, the Curators turned all human minds inward so they could no longer observe the Universe and cause its expansion in this novelette set in the distant future. A few humans, traveling in space at relativistic speeds, survived. These survivors find planets filled with humans turned into statues with their minds alive but locked at the point of intervention.

Aristy is a jaded salvager of minds from the Curators’ victims. Without the proper authority, she is working an island kingdom where she finds the minds tell her of unspeakable cruelty and a desire for revenge against the local Generalissimo.

An unusual story that slowly unravelled its mysteries and kept the reader engaged in this bizarre vision of the future.

A journalist is searching for a story in this SF short set in a coffee shop on a space station. The journalist meets an anthropologist who tells him a strange story from a distant colony.

The story the man tells the journalist involves a dispute over the Ramadan fast where some of the people are genetically altered to supplement their food via photosynthesis. Others, on the colony, claim these altered people aren’t really fasting and must make amends under the Sharia laws. But before the stranger can finish his story a disaster strikes the coffee shop, stopping the stranger and his tale permanently.

The prose style was light and enjoyable, but the plot offered little to fully engage the attention of the reader.