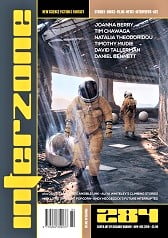 “The Kindest God is Light” by Joanna Berry

“The Kindest God is Light,” by Joanna Berry, opens with what appears to be an extract from an academic paper about xenopsychological studies and the ability (or otherwise) to communicate with aliens. We then come to something labelled as an annotation, something that reads like a journal entry, and chunks of text that have been (quite literally) crossed out. It’s all intended to give the impression of someone trying, and struggling, to write something. The author is one Taia Greene, and she’s being regularly visited by someone called Ryan Cresswell. There’s something called a “sync rate” that keeps going down. Somewhere in all this there’s a skeleton of a story about the trustworthiness, or otherwise, of Ryan. It’s certainly very different, but the crossings-out (multiple paragraphs at one point) and egregious use of italics drove me up the wall. It turns out that the author is a game writer so perhaps readers who play a lot of computer games will appreciate the style more than I did.

I felt on much safer ground with “She and I and We,” by Timothy Mudie, which begins in a coffee shop where the narrator is listening to a poet. The poet sees her and recognizes her, and we then jump to another point in the narrative. This is a time-travel story, but a unique and cleverly-done one. I very much enjoyed the ending. Recommended.

“Dent-de-Lion,” by Natalia Theodoridou, is set on an alien planet called Pharon, where a botanist called Thomae is investigating the local flora, supported via a comms system by someone called Derek. We learn she’s looking for a plant which might have the cure to “Influenza F”—a disease that’s devastated Earth. The plant, it turns out, is strangely familiar. The story, though, isn’t really about those concepts: it’s more about the push and pull between Thomae’s work and her family life. This piece didn’t quite satisfy me, and I think it boiled down to that emphasis: the xenobiology was really interesting, but unfortunately I found it quite difficult to care about Thomae’s marriage, perhaps because we hear very little from her wife, so we don’t really witness their relationship and don’t develop the emotional resonance that would make Thomae’s final decisions feel significant. As a result, the balance of the story felt off.

In “Parasite Art,” by David Tallerman, the main character is situated on a planet called Clucifa. A parasite, called the Zobe, sustains him (or her? or them? The artwork with the story suggests a man, but I don’t think their gender is specified) while he creates works of art. Or perhaps the Zobe are less parasites and more symbiotes, collecting human memories as their hosts experience memories from their incredibly long existences. The story muses over the possibility of separating from the Zobe, something that hosts rarely do. The underlying theme is one that will resonate with many creative types: do you really control your art, or does it inevitably end up controlling you? Is creating, and selling, art worth the isolation and lack of self-care that so often seems to go hand-in-hand with artistic endeavors? This is a thought-provoking piece, beautifully written and well-worth a read.

“The Duchess of Drinke Street,” by Tim Chawaga, is about a woman who opens a cupcake shop in New Lagos: “the first NautiCity to pick up anchor and sale away from the land city that bore it.” The location is the titular Drinke Street, which is actually a canal with various eateries along its banks. A woman called Rina Priestly writes a popular food blog about the restaurants in Drinke Street, and the protagonist is desperate for a good review from her. She becomes slightly obsessed, following Rina and trying to become her friend, whilst also trying to capture the “Taste of Drinke Street.” This is a quiet piece, reflecting on how commercialism eventually ends up destroying things that work magic on a small scale. The pace is slow, but nevertheless I enjoyed this story.

In “Dream of the High Mountain,” by Daniel Bennett, we meet Morgan, a man who is staying at some kind of retreat and who has, we learn, taken prescribed hallucinogens the previous evening. In this world people make “clips,” which seem to be snatches of memory, and which they can share with other people. Morgan has seen clips made by a woman called Elena Fisk, and ends up talking to her at the retreat. We learn that people can, if they have enough money, send samples of their DNA into space in the hope of finding immortality. This is a dreamy piece that seems to be about finding ways to ground oneself in reality. It didn’t entirely come together for me, perhaps because I found it hard to like the selfish Morgan.