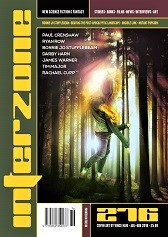 A time travelling musician from the distant future seeks inspiration in the past in Richard Wagner’s “Grey Halls.” To his chagrin, he discovers that his most popular song is just a reincarnation of another melody from the 70s. The story raises the question of whether any creative work is unique, or whether we are just rediscovering the same themes and ideas over and over again. The conclusion that, even so, there is beauty and wonder in the immortality of ideas—is comforting.

I normally recoil in horror at the mere mention of superheroes, but Ryan Row’s “Superbright” completely overhauled my preconceived notions of the genre. This story is beautifully written, captivating, and I cannot recommend it enough. It describes a world where many people are born with super powers, yet they are often inconveniently limited. For example: “her mother and father could both fly in flawed and halting ways, one very slowly and the other only at a fixed altitude of 550 feet at a fixed speed of 55 mph.” Some grow up to be superheroes, while others turn into villains. The scale of one’s powers determine one’s social standing: those more powerful obtain prestigious positions defending various towns from high-ranking villains.

In this setting, the narrator finally gets his wish of becoming a powerful superhero after a freak accident, but he realizes the position is not all it’s cut out to be. There is something profoundly sad, yet delightful about this story. The people who inhabit this world are so similar to ours, their lives similarly flawed and problematic, despite their access to superpowers. At every twist and turn, the author adds tiny details about the lives of the characters as embellishment, which serves to make the setting all the more real. In the end, we feel very invested in the flawed and limited characters. All in all, a truly wonderful read.

Darby Hern’s “Tumblebush” is a noir detective story set in a post-apocalyptic world in which New York and many other coastal cities have been reduced to flooded ruins. Most people work as social media content producers for a mysterious and all-powerful corporation in exchange for subsistence wages. The plot itself is very engaging and relentlessly fast-paced. However, my favorite thing about this story was the detailing that brought the world to life and conveyed just how decrepit the circumstances were: rats caught up in glue traps, “disaster tourists” taking photos of Chelsea ruins, starving and slow horses meandering their way around an old ranch. The story warns of us becoming distracted and obsessing endlessly over social media and internet consumption, while our physical world slowly decays around us.

“P.Q.” by James Warner describes a researcher studying a new ant species that build strange structures within their nests with supposedly protective powers. While the true purpose of these mysterious structures is never revealed, the various characters posit many theories, including religious temples and olfactory statues. For me, it’s a bit of a stretch calling this story speculative fiction, though I appreciate the sense of mystery and wonder that permeates the piece.

Treasure seekers visit Mars in search of fame and wealth in Tim Major’s “Throw Caution.” But the gold rush comes with a twist—the much sought after Martian diamonds are found inside local crab-like alien life forms. This fun little adventure story shows the dark side of exploration—how our thirst for knowledge is inextricably linked with our more materialistic and exploitative tendencies.

A mother and daughter struggle to stay alive in a ruined world in Bonnie Jo Stufflebeam’s “So Easy.” The story is very dark and eerie—corpses sprinkle the streets and the main character—a teenage girl—finds her best friend’s body decomposing in a tub. The adults in this universe seem to be engaged in self-deception, unwilling to admit to themselves and their children just how hopelessly they’ve ruined the planet, clutching at straws in hopes of survival, but to no avail. The protagonist’s mother believes in finding salvation in the ocean, that there are underwater shelters, only to drown in front of her daughter. A very dark story, but one I enjoyed very much, nonetheless.

Michael finds a pair of eyeballs with a consciousness of their own in Paul Crenshaw’s story “Eyes.” While the premise is somewhat horrifying, the story is very poignant, exploring the themes of memory, sacrifice and coming of age. The eyes tell Michael of a strange world where children are born blind and only acquire sight as their parents pass down their eyes to their sons and daughters. This sacrifice creates a powerful bond, as each new generation learns to see the world through the eyes of their parents.