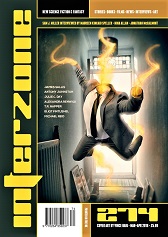 “Beautiful Quiet of the Roaring Freeway” by James Sallis

This issue of Interzone could be subtitled “The Philip K. Dick Issue.” In most of these stories, you will find yourself looking for the ontological floor and wondering who your friends and enemies are and what constitutes success or failure. While most stories of this kind are not great and those of this issue are no exception, there are a couple of good ones, including one superb one.

“Beautiful Quiet of the Roaring Freeway” by James Sallis

Much like “Artisanal Trucking, LLC” in this month’s Asimov’s, this story seems to take place in a near-future of automated driving. A couple pays a large sum of money to be driven around by a human and aren’t overwhelmed at first.

Few readers will be overwhelmed at all by this ironically dull and static tale which seems to approve of the dangerous chaos of humanity but conveys none of it. Then again, I’m likely wrong because I don’t think I’ve ever felt confident that I’ve gotten what any Sallis story was trying to do.

A wormhole collapsed on a domed colony world awhile ago and they’re just muddling through at this point. Meanwhile, some odd things have been dug up in mining operations, called “souls,” which are suspected of being indigenous lifeforms and/or are used as drugs and/or are mcguffins to drive part of the plot. The plot mostly revolves around a woman extracting herself from dependence on her abusive “thousand assholes rolled into one” ex-boyfriend. And there’s music.

Holding an infodump until two-thirds into a story doesn’t make it any less of an infodump. It just makes the first two-thirds of the story less interesting due to vagueness. The parts of the story may have “vibe” connections but really seem to relate very little. Then there’s the style. Damn profanity. Sentence fragments. Stream of consciousness but from whose consciousness? So hip it’s square, especially for futuristic SF. That said, the body mods, while nothing new, created interesting imagery. Incidentally, the protagonist’s “music” (though external rather than internal) is oddly similar to the music of “The Streaming Man” in this month’s Analog. Odd note: this is the issue’s sole novelette according to the table of contents, but I get just under 7,000 words, making all the pieces in this issue short stories.

Jenn and Kandi start a quantum strip club in San Diego with the help of the physicist, Bitta Ringenbach, while war rages outside. When Bitta bach’s out and the war comes too close, Jenn’s driven to desperate miracles.

This is the type of quantum magic story (using the word “miracle” in two different sections) that does nothing for me. For people who enjoy this sort of thing combined with a dash of risque moments, what I think was supposed to be humor, and some sober shades of Omelas-with-a-twist, this might work.

“Never the Twain” by Michael Reid

In 2681, a blonde girl named Hjørdis is one of a group of people hiding from the repressive interstellar hegemony of the Catchment. In 2018, a Muslim boy named Saif is dying of cancer in America. They are the same person, always conscious of each existence simultaneously but driven to hide it due to general unbelief. The only exception, in the sense of at least knowing about it and trying to believe, is Hjørdis’ boyfriend, Devon. The tale takes us through a pivotal period in their lives.

This is one of the best stories of the year. My only complaint is a cluster of related things centered around the story’s social messaging which sometimes interrupted the aesthetic experience. In one of a couple of its anti-American swipes, while Saif would perhaps not be inclined to have sympathy for a “racist” American he and his sister encounter, it’s disappointing that a dying brother, even on reflection, has none for a woman whose brother was killed in combat and thus is in the same position his sister Mira will be in. That’s not an excuse, but an extenuation. By including gender identity, sexual orientation, religion, ethnicity, and probably more, it seems to be almost ostentatiously trying to “check boxes.” It’s disappointing that it could almost be reduced to being only that. Many readers will think it’s one of the best stories of the year for precisely those things. For readers who need more, I’d say that the story’s virtues are excellent construction and an unfolding of milieu which is handed out in deft asides as things progress, resulting in a constant oscillation of “cognitive dissonance” and grounded orientation. The situation is a wild one which is a larger, more science fictional version of Iriarte’s recent (and also strangely superb) “The Substance of My Lives, the Accidents of Our Births” (Lightspeed, January 2018) which has a fantastic and sequential “reincarnation” premise rather than a simultaneous and genre-bending “twain” premise. (The 2018 storyline, by itself, is pure realism. The 2861 storyline, by itself, is pure—if soft—SF. The thing that unites them and transforms them, taken as given, is pure fantasy.) Most importantly, this premise is deployed in a way that draws out a lot of fascinating, sense-of-wonder thoughts and feelings. Both characters’ trauma is very affecting and yet this is a story with much lightness and humor (the Vanna White line actually had me laugh out loud). Ideas, feelings, characters, structure—this has it all.

Ezra’s a supertank commander in this military SF piece involving a war against China. The “Eromanga” tank is like a land submarine in the sense that Ezra and his crew have been in the tank for a very long time. Since his driver got wounded and needed opium, he’s become the keeper but has been sampling it himself. Reality gets strange.

This was too slow-moving to be especially good, but was reasonable until it outsmarted itself, got metafictional and, well, “tanked” (regardless of validity of theme). I can’t review the twist-and-twist-again without spoiling the story but they weren’t good, especially as the first twist is more believable (if fatally cliched) than the second. Incidentally, the drug motif reminded me a lot of Rich Larson’s much superior “Extraction Request” (Clarkesworld, January 2016).

Zeke’s got a habit of flatlining the hard way in this fantasy, with his friends throwing him into the ocean where he drowns until they pull him up and revive him. Every time he comes back, the world’s changed a little. So he decides to start messing with the baleen-like lines of the world intentionally to try to make it better.

If this story were a song, it might be Blue Oyster Cult’s “Don’t Fear the Reaper.” Well done, beautiful, with a questionable (appealingly repellent? repellently appealing?) theme. It also reminds me of something I can’t put my finger on (which dealt with the same sort of change motif but with parallel worlds or something). This is more along the lines of an honorable mention or recommended for certain readers than something I’d recommend generally but it is enthralling and will appeal to some.

Delilah is in the brig on a starship infested with Xesans controlling the crew on their way to destroy Earth. Her Zen training gives her special advantages to deal with this situation but also makes her susceptible to endarkenment.

I wouldn’t have wanted this short story to be any longer but it really is a throwaway piece that doesn’t really care about anything but its point, which isn’t particularly appealing.