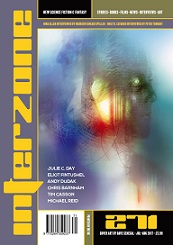 “The Rocket Farmer” by Julie C. Day rides the border between SF and the fantastic. In it, a bitter divorced mother and her angry teenaged daughter have to come to terms with the family history of rocket farming. The main conceit, that the family has a 1000 year tradition of raising rockets is an interesting one. However, the melding of that with the family dynamics is uneven. The ending seems a little too pat and the allegory of the story could use further development. That said, the writing is solid and the ideas good.

“Gods in the Blood (of those who rise)” by Tim Casson is a tightly woven story exploring concerns of genetic manipulation and evolution. The lead character, Everett, teaches at a public school that is in slow decline. He is obsessed with the decline in the general population as a result of progress that has allowed those with a lower IQ to survive. His paranoia and anger is clearly conveyed in a claustrophobic writing style that easily brings his issues to the fore. The story takes a twist when it seems that there is perhaps some validity to his theories. The interlacing of Sumerian myth adds a nice element without removing the question of whether Everett is hallucinating or has discovered something significant.

Michael Reid’s “If Your Powers Fail you in a City Under Tin” is set in a future where magic has returned to the world after the God Beast tore a hole into this dimension. Jun, a portalist with control problems and a haunted past, starts to panic when his lover, Riel, disappears while fighting for the UN. As a week passes without word, Jun finally discovers how to control his abilities and makes an attempt to rescue Riel. There is a lot to like about this story, specifically a complex and interesting world, but the plot itself is thin. The majority of the story is spent creating the world, but as a result the plotline is neglected and the rediscovery of Jun’s powers feels very much like a too convenient Deus ex Machina. While I like the world, I felt that the story existed to showcase it, and not the other way around.

Eliot Fintushel creates a world in which people are partnered by genetic match in “Chubba Luna.” Sweeney, the protagonist, lives in a chaotic world where society has almost broken down and due to NPJ, Non-Punitive Justice, there are few consequences for any actions. He, Mo, Sheila Mo’s paired partner, and the Bartender gather together to argue, drink and decide what to do with their lives and partners. The story has positive elements, but lacks any real plot and the world building seems fairly sloppy.

“When I Close my Eyes” by Chris Barnham is the story of the first manned expedition to Titan. Darlo, one of the team, becomes trapped in an ice cave and has to make his way out while dealing with visions of his dead wife. When he discovers that there is life on the moon and that it seems to dislike his light he has to rely on faith in his hallucinations to save him. The story, an explorer facing a hostile environment is a common one, but Barnham does a good job of mixing the psychological elements to add depth to the piece. While not a great piece, it is well written and worth the time to read.

“Cryptic Female Choice” by Andy Dudak is the first person narration of a woman choosing the genetic traits of her child. Thanks to the Carbonhousian spermathecal, women can store and mix and match genetic qualities from multiple mates in order to create a baby. However, conservative forces have fought against those who make use of it. The writing is solid, but the piece feels trite and predictable. The story is another in a long line of Handmaiden’s Tale inspired dystopian pieces and doesn’t add anything new. All the expected tropes are present. The allusion to the Spanish Inquisition, the inversion of female stereotypes applied to men, patriarchal oppression based on fear, etc. etc. etc. For those who like this genre, this is a decent example, but don’t expect any new ground to be broken.