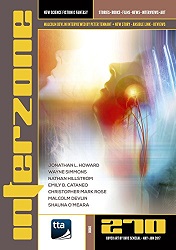 “Like You, I Am A System” by Nathan Hillstrom
“Dirty Code” by Wayne Simmons
“Encyphered” by Jonathan L. Howard
“The New Man” by Malcolm Devlin
“Evangeline and the Forbidden Lighthouse” by Emily B. Cataneo
“Memories of Fish” by Shauna O’Meara

Interzone is new to me, and so is every writer featured in issue #270. I don’t read much British SF, but after finishing Interzone, I’m going to. The whole magazine felt fresh, and while I didn’t enjoy every story, most of them were good and a few great.

Sometimes you read a story and you have no clue what it’s all about. “Rushford Recapitulation” by Christopher Mark Rose is like that for me. In the town of Rushford, women suddenly start giving birth to technical objects. A cell phone, a Walkman, an old, brass sextant. Why? Nobody knows.

I kept expecting some sort of resolution, and while there was one, it was just as absurd as the rest of the tale. So if you like your Kafka with a technical bent, you’ll love “Rushford Recapitulation.” Me, I’ve had enough reading about people turning into bugs in school.

What are the birth pangs from the inside, when you’re a hyper-intelligent machine, a newborn of vast scope? In “Like You, I Am A System” by Nathan Hillstrom, an AI hyper-intelligence is born, and promptly murders its siblings, then turns to exploring the world, only to realize that it loves humanity. But will we survive the love of a living God trying to recreate us in its own image?

“Like You, I Am A System” is beautiful, enticing, and Hillstrom has managed to wrap some heavy moral questions in a tight plot sprinkled with harsh but gorgeous prose. And the guileless innocence of the AI is fun, if you enjoy absurd viewpoints.

With “Dirty Code,” Wayne Simmons weaves a marvelous tech noir worthy of being compared to Bladerunner, with a 2020-esque twist. In it, a hard-boiled cyber-detective goes hunting for a hackjob, a person infected with a software virus.

The story follows genre conventions, with seedy bars, homeless outcasts in dark alleys, neon, sex, and guns. If you enjoy that kind of thing, you’re sure to love “Dirty Code” (I did), but be aware that the story lives through Simmons’s skill with words and knowledge of convention, rather than innovation.

“Encyphered,” by Jonathan L. Howard, could just as easily have been named “A history of cryptography.” Here, a small boy is caught in a lie, which starts a life-long passion for codes and cyphers.

You have to give Howard credit for the background research, and the correct distinction between code and cypher. The story, however, isn’t much more than a collection of “he learned this, then he learned that” passages. If you have an interest in cryptography, and a penchant for turn-of-last-century mystery novels, you’ll probably nod at the somewhat gratuitous fan service. I know I did, but I was also annoyed at the cheap trick Howard used to tie the story up, and the lack of any kind of plot. Sharp prose, fan-service, and not much else, but if you’re a cryptographer, you’ll probably like it.

So you’re walking along in the warehouse, doing your job, and then -boom- a fifty-ton crane drops on you. Splat, the end. Except when it’s not. In Malcolm Devlin’s “The New Man,” a man dies. Except that his death will cost more in reparations to his wife and children than it would to clone him a new body. A cost-effective basic model body, of course. But what happens when you come back missing some pieces? Are you still you?

Devlin manages to raise some thorny questions about ethics, morals, self-hood, and love, and do it all within the framework of a tightly written story. If you like that sort of emotional guesswork, you’ll love “The New Man.”

Sometimes you find a story that makes your heart melt. “Evangeline and the Forbidden Lighthouse” by Emily B. Cataneo did that to me. In it, a child finds her best-friend-forever one not-so-magical summer at the beach. Together the two girls start to find bottles washed up on the sand, containing scrolls with predictions of the future. Cady, the narrator, finds herself longing to know how her life is going to turn out, but Evangeline fights back.

Ultimately, “Evangeline and the Forbidden Lighthouse” is about the loss of innocence. It’s precisely the kind of literary, plotless nonsense I abhor in SF and fantasy. And yet it works. It works wonders—to the point where I found myself staring into the distance, wondering where I could have chosen differently in my own life. A lot of this is due to how well-rounded Cataneo’s characters are, but it works for me. Read it if you like characterization.

Travel the world, without leaving your living room… In Shauna O’Meara’s “Memories of Fish,” an unnamed tourist spends his day in his living room, jumping from tourist drone to tourist drone in a 20-years-from-now equivalent of street surfing on Google maps, complete with 360 degree floor-to-ceiling TV and olfactory simulator. Everything is going great—until a local girl steals the drone. Hashtag #GoDroneGirl goes viral.

“Memories of Fish” is a well written take on the gulf between the haves and the have nots, and climate change. It is also intriguingly beautiful, and a sharp satire of today’s armchair philanthropy. Well written and well worth reading.