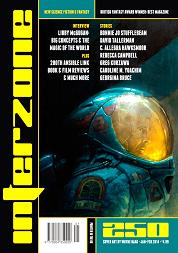 “The Damaged” by Bonnie Jo Stufflebeam
“Bad Times to be in the Wrong Place” by David Tallerman
“The Labyrinth of Thorns” by C. Allegra Hawksmoor
“Beneath the Willow Branches, Beyond the Reach of Time” by Caroline M. Yoachim
“Predvestniki” by Greg Kurzawa
“Lilacs and Daffodils” by Rebecca Campbell
“Wake Up, Phil” by Georgina Bruce

“The Damaged” by Bonnie Jo Stufflebeam

Robin Kirkland is a robotics engineer who works on PlayMatez – sex robots designed to look and feel human. The ones who break down and are abandoned by their owners to live on the streets are called ‘damaged’, and Robin has begun taking them home, surreptitiously, as such behavior is strictly against company policy. She says it’s only to satisfy her curiosity about why they break down. However, she discovers something odd, and with the help of her latest rescue, Lachlan, they begin to unravel a company secret. The story was somewhat reminiscent of the movie Blade Runner, but I felt the author didn’t quite hit the bull’s eye. I also kept waiting for more of a parallel between the ‘damaged’ robots, and Robin’s own damage, but perhaps that was not the intent.

“Bad Times to be in the Wrong Place” by David Tallerman

Set in what appears to be modern-day Appalachia (or somewhere similar), this story  has a hint of The Matrix to it. Told in rich, descriptive prose, it begins with a male narrator, who has had a bit of a row with his wife, Darlene. He heads to the truck stop for some coffee, and to clear his head, where he meets some travelers, who cause him to re-evaluate his life.

“The Labyrinth of Thorns” by C. Allegra Hawksmoor

In a near-future, semi-dystopian city, where everyone has brain implants, an unnamed operative of an unnamed company is attempting to infiltrate The Collective – a shadow group, about which we learn nothing, but that the company is trying to get to them. The operative meets with a young woman in an attempt to connect with The Collective. To prove his trustworthiness, the operative accepts an artificial memory. This story is told in stark prose, as is befitting the bleak cityscape. This bit of realism is nicely contrasted with the surreal descriptions of the labyrinth, which may or may not be a metaphor. You decide.

“Beneath the Willow Branches, Beyond the Reach of Time” by Caroline M. Yoachim

This is a love story, and a time travel story, and an homage to a Japanese folktale. The science behind the time travel was intriguing, but the love story would have been better had we not been tipped as to the ending by the re-telling of the Green Willow folktale. Nevertheless, I liked it, but then I enjoy Japanese culture, time travel and love stories.

Ben has accompanied his wife, Myra, on a trip to Moscow, Russia, despite her protestations that she’ll be busy. From the window of their room, Ben sees a strange tower that seems out of place. Soon, he’s seeing more, and despite his best efforts is unable to get to one from street level. Myra is too busy with work issues to care, but Ben persists in trying to find out what is happening, and things go from bad to worse. I might have enjoyed this story more if I knew the meaning of the Russian phrases sprinkled liberally throughout. Since they are given in the Roman and not Cryllic alphabet, it’s difficult to use Google Translate – besides, one shouldn’t have to work that hard to enjoy a story. However, this may have been the author’s intent, because I was able to translate the title after reading the story, and it made everything click into place. Having this knowledge beforehand may have spoiled things a bit.

“Lilacs and Daffodils” by Rebecca Campbell

It is difficult to provide a description of this story without spoiling it for the reader. Suffice it to say that this is a poignant story of loss and remembrance, told in a very interesting way. The narrative style may be off-putting to some, but if you’re not afraid of your SF being a little on the soft side, you may enjoy this one.

“Wake Up, Phil” by Georgina Bruce

This is another story that is difficult to describe without spoiling it. It starts out as a seemingly straight-forward near-future story, where corporations rule our lives and climate change has forced everyone to live indoors/underground. The protagonist is an office worker, who gets called upstairs (never a good thing, in any era) and things get a little weird after that. I think this is an attempt at a humorous story, but the result was a little muddled – it was humorous, at times, and there’s a bit of a twist, but then it twists back, and then it goes sideways, and then it ends. I wanted to like this one, but I just ended up confused.