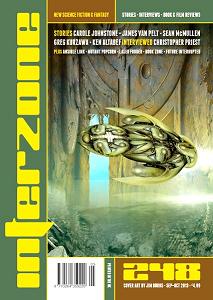 Two spacefarers—there are reasons they are not “astronauts”— zoom through space in a solar-sail-powered octahedron. The point of view character, Lena, and the male, Rick, have been in space long enough that they have come to dislike, envy, and occasionally fear one another. Their communications, beyond frequent sex, are minimal. A crew 3.57 billion miles away is piloting the ship. Lena feels that the ship should be turning around for the voyage home, but that does not seem to be happening. Animosity between Lena and Rick grows daily. That the story is from Lena’s perspective makes her look like a paranoid shrew. Rick, for his part, comes off like an insensitive ass. This tale leaves one wondering whether their relationship has deteriorated because of being in space for so long, or if it had been dysfunctional all along with both of them ignoring the signs.

Were this story about another institution it could be titled something like, “Behind the Scenes at Hogwarts.” The narrator here fills us in on Hareton’s inception, then takes us on a grand tour of the school through many years, changes of administration, and political events. Hareton is not a school of magic. However, it is more than the simple school it seems on the surface. Though it begins as a mere educational institution, it evolves into a living, breathing community. Within Hareton’s many walls are rooms, and students, that appear and disappear. If you see a rabbit inside, the superstition is that your next day will be lucky. This story, though rich in detail, insinuates rather than declares its speculative fiction elements. What we have here is the encyclopedic rather than the Cliff’s Notes version of a facility tour.

Sam buys a house, sight unseen, at auction. His plans are to demolish it, fix it up a little, then resell it at a profit. That is until he finds journals from the previous owner, a stage magician named Kurricke. Reading them, Sam is intrigued by Kurricke’s apparent dabbling with sentient mannequins and his use of them as part of his magic act. Then Sam learns more about the mannequins and finds the hatch in the middle of the living room floor. Opening the hatch, he learns that there is a waterworld below the house. Sam hires a SCUBA diver, David, to investigate. What Sam and David discover changes Sam’s plans. This story would have been more satisfying if the author had not given away the ending so early in the tale.

An old man, never named, is the central character here. In a time when war has taken a vibrant metropolis and converted it into a dusty ghost town, he sees the world as it used to be. The device for this transformation is a pair of opera glasses with rose-colored lenses. Each glimpse shows something of the past in its former glory. The titular theater has gone so far into disrepair that it is to be torn down to make way for a railroad. When a workman evicts the old man from the theater one evening, the old man goes home to find his landlady, stitching in the common room, a fire lit to warm the place. He tells her that the theater is to be demolished. She reminds him of a petition that had gone through the community to prevent that event. The old man goes back out into the snow, ostensibly to find the primary petitioner. Beyond the cliché of the rose-colored glasses and the overdone things being removed to make way for some kind of transportation, one has to wonder why, if the glasses do what they appear to do here, the situation is as it is.

In 1875, Lewis Blackburn is so brilliant an electrical tradesman that James Kellard buys the company for which Lewis works so as to procure Lewis’s services. The task Kellard has in mind for Blackburn is to become Foreman of Engineering for a secret project building a calculectric or, as Kellard calls it, a technarion. The purpose of this device is to provide glimpses into the future along the lines of a time telescope. The project is conducted in such secrecy that Kellard provides housing for his employees and claims to have the power of life and death over them. Things go well until Blackburn realizes that he needs a faster way to program the technarion. He advertises for a typist. Enter Elva Landers, an American woman. Blackburn and Landers develop a relationship and become engaged. The twists toward the end tie the story back to the beginning. This is a variation on the theme, “sentients good; computers bad.”