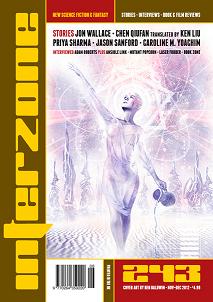 “Moon Drome” by Jon Wallace
“The Flower of Shazui” by Chen Qiufan
“The Philosophy of Ships” by Caroline M. Yoachim
“Lady Dragon and the Netsuke Carver” by Priya Sharma
“Mirrorblink” by Jason Sanford

“Moon Drome” by Jon Wallace is the story of a race very similar to what used to happen in the Roman Collesium. Scorpus, a champion racer, is actually a slave owned by Flavio Maxim. His next victory, his next race, will make Favio rich and earn Scorpus his freedom.

Scorpus and Favio Maxim are two sides of the same coin. Wallace spans his story over several years from the perspective of both men. He has interesting character development but this gig was not my cup of tea.

In Chen Quifan‘s “The Flower of Shazui,” Shazui Village is located somewhere between Shenzhen and Hong Kong. It was bypassed by the country’s recent economic miracle and instead became a low rent backwater full of shady characters. The narrator of the story is a man with a past who finds Shazui a convenient place to hide.

Shazui fills an important need for him. His situation appears to be stable until he meets a local prostitute named Snow Lotus. “The Flower of Shazui” is about people who’ve found themselves in the traps of their own making. Chen Qiufan has written a story with excellent character development. I liked this one.

The body is the container for the soul, or consciousness. In “The Philosophy of Ships” Caroline M. Yoachim describes a future where one body may carry several consciousnesses which can be moved from host to host like so much data. As Linus of the Peanuts comic strip once said, “The theological implications alone are staggering” but Yoachim’s characters don’t spend a lot of time discussing theology.

Instead, the story revolves around love and loss, including how does one relate to a person who’s become part of a larger entity. The story is thought provoking with one or two nice twists, but not a great read.

Priya Sharma‘s “Lady Dragon and the Netsuke Carver” we learn that netsuke are miniature sculptures which originated in Japan centuries ago. Considered an art form, each piece offers an inherent symbolism for the owner. Chiyuko, Samurai born, and a ruthless wielder of power, wants her netsuke carved in the form of a dragon.

“Lady Dragon and the Netsuke Carver” is an examination of the Lady Dragon and her relationship to the people around her. The story begins during her recovery from major surgery while in pain and very dependent on others. Sharma creates characters whose motives tend to add up and make this a worthwhile read. A very good story.

“Mirrorblink” by Jason Sanford is the story of an Earth held hostage by aliens. Ein is a wanderer on this Earth, where the laws of physics have been altered and the aliens responsible for the change may wander as well. Ein’s quest is to collect data, and possibly determine the future of mankind.

Having aliens in the plot as a brooding, all powerful, but secretive presence is quite common. The device usually allows writers to describe an alternate Earth. Sanford has done this reasonably well and thrown in an alien as a character to boot. The story has potential, but I had trouble visualizing his version of Earth. Not a great read.