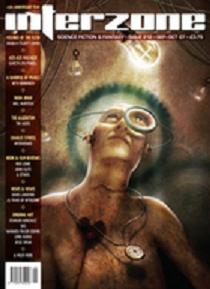 “Feelings of the Flesh” by Douglas Elliott Cohen

“A Handful of Pearls” by Beth Bernobich

“Dada Jihad” by Will McIntosh

“The Algorithm” by Tim Aker

Douglas Elliott Cohen‘s novelette “Feelings of the Flesh” is set in a harsh, post-apocalyptic landscape reminiscent of both Westerns and tales of sword and sorcery, where the inhabitants are surrounded by the relics of vastly more powerful “ancients,” hard-pressed to distinguish between science and magic, and menaced by monstrous mutants. The characters are readily recognizable types, not least of them the protagonist Tarrik, a pistol and sword wielding bounty hunter pursuing a vendetta against Olethia, the mutant who killed his lover Zaleen.

The familiarity of this set-up, along with the story’s fast pace and considerable action, gives it the feel of old-fashioned but competent pulp. However, just as might be expected in an Interzone story, there is a twist here, centering on the nature of those mutants. The twist here is that those mutants can steal the senses of their victims, heightening their own sadistic pleasure. The implications of this innovation, and the author’s careful handling of it, give the story another layer of interest and depth by the end.

Gareth Lyn Powell‘s “Ack-Ack Macaque” opens with its protagonist Andy suffering terribly from his break-up with his girlfriend Tori, who left with just a “Dear John” letter after they had been living together three months. His pain is worsened as he watches “Ack-Ack Macaque”–the online manga she wrote and drew–explode into a cultural phenomenon. (The “Ack-Ack Macaque” is a monkey who, not unlike Charles Schultz’s Snoopy, does battle with the “Baron Von Richter-Scale” in the skies over Europe.)

Andy’s extreme reaction to his romantic troubles is bound to engage some readers and turn off others, and in either case leave them wondering for the first half where the speculative element is in this story. When it does arrive, the story suddenly takes a very sharp turn that makes it feel almost like two different pieces glued together (though there are earlier hints about where this may be headed). Additionally, those accustomed to getting their science fiction from television and film rather than print may find it obvious and easy. In the end, it is up to the cuteness of the idea of a little monkey flying a biplane to carry Powell’s story.

Beth Bernobich‘s “A Handful of Pearls” similarly left me wondering about exactly where it was going. As stylishly written as its title implies, it is initially intriguing in its depiction of a scientific expedition’s arrival in a largely unexplored island chain. The islands, however, are a backdrop for the real story, the career-minded scientist Yan Dei’s inner demons–and the banality and silence that so often go with them. Likely to frustrate some, the subject matter is handled intelligently, but problematic if you go by the old view that the science should matter in a science fiction story. The subtle “lived-in” differences between that world and ours have virtually no impact on Dei’s tale, and indeed, with the editing of a handful of background references, the story could easily have been about a participant in an expedition on our planet, in our own time, inside a conventional, realist narrative.

Will McIntosh‘s “Dada Jihad” starts out conventionally enough (with a college student trying to complete her Ph.D in biotechnology), but the world Ange inhabits is nothing of the kind. The backdrop against which she is doing this is one in which global warming has precipitated state failure, manifested in ways large and small, like the absence of the most basic security on the streets, and a plunge in living standards. (Ange “missed air conditioning, daily showers, eating anything she wanted at any time”–and the irony that all of this has occurred even though government tepidity in acting on the problem was supposed to prevent changes in our “way of life” is certainly not lost on her.)

Of course, Ange is not living in a Mad Max movie just yet, the rich still having gasoline to burn and lawns to mow, and the protagonist sees in her science degree her one hope of getting someplace better. However, she has to contend with a number of complications before that can happen, like a dissertation director who wants to sleep with her; and her involvement with a group of “eco-terrorists” determined to slow down the world’s self-destruction with tools like “Dr. Happy” (a virus that eliminates aggression in those infected with it), and quick-growing, fast-spreading “bamboo root” which will disrupt transport networks.

The resulting story is energetic and colorful enough to hold it together despite sometimes loose plotting. More problematic are the characters, who seem like a pack of right wing clichés at first glance, those apart from the hard-working Ange a collection of nasty college types ranging from lecherous professors to overzealous activists. In this context, though, with a worst-case environmental scenario rapidly playing out, the piece can not be lightly dismissed as a political tract. Indeed, like all the other causes of chaos in her life, her campus troubles are ultimately just more pieces of the generalized “dada jihad” of a world physically and psychically breaking down.

In the last story, Tim Aker returns to the world of Veridon (last seen in “Toke” in the magazine’s June issue). The center of this story, however, is not the city’s backstreets, but a religious order centered on a Church of the Cog containing “no pew space, no altar, no choir loft” but machinery working out a sacred algorithm. The components of this machine church come from vessels the churchmen find in the river that they believe to have been sent floating down it by God from the mysterious “Mountain” where the river’s headwaters are believed to be located. In the most recent vessel, however, there is no machinery, just a little girl, and as might be expected the discovery sows doubt and confusion among the holy men, which quickly turns ugly. Like “Toke,” “The Algorithm” is imaginatively conceived and elegantly written, but I found this one the richer and more complex.