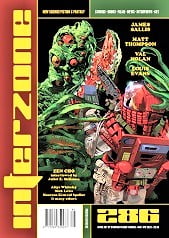 “Organ of Corti” by Matt Thompson

Issue 286 of Interzone features four stories loosely themed around war and conflict, and its long-term effects on those who have to live in the aftermath.

“Cofiwch Aberystwyth,” by Val Nolan, begins with the main character, Mila, seeing a bloated human corpse floating in the water of Aberystwyth’s (in Wales, U.K.) harbor, immediately indicating that all is not well in this particular version of the world. Mila is recording things for a social media feed, and has used her father’s borrowed boat to enter the exclusion zone around the harbor in order to get footage, willfully ignoring the dangers. We learn that the destruction is the result of a terrorist attack in post-Brexit Britain, but not the sort of attack anyone had been expecting. The real question, though, is what has happened to Mila’s friends? This is a compelling story, the background of which feels disturbingly probable in the current environment. The characters are well-drawn and, without giving anything away, the ending comes together nicely.

“Rocket Man,” by Louis Evans, is another story exploring the consequences of nuclear weapons. The main character tells us that he dreams of Moscow every night, describing them as “bombsight nose cone dreams.” We quickly learn that the military has developed a manned long-range nuclear strike rocket, and that our protagonist is one of a select few who’ve been assigned to pilot these rockets. He, though, has plans. This story has twists and layers, and constantly wrongfoots the reader. What is true, and what isn’t? The constantly shifting narrative could be frustrating, but somehow manages not to be. Rather, I found myself sympathizing with our protagonist’s scattered mind. Cleverly done, and well-worth a read.

In “Organ of Corti,” by Matt Thompson, we find ourselves on an expedition somewhere near the Iberian coast, part of a group made up of a botanist, a scout, a fine art student with her partner, and the team leader, Ana. Elias, the point-of-view character, is an entomologist—an expert in insects—which is something of a clue as to what’s about to happen. The group come across a tunnel and, of course, they enter it and begin to explore. The ‘scientists wander into a place they clearly shouldn’t wander into because someone says they must’ trope is a common one in science fiction, and one that I have to admit I find it difficult not to get annoyed with, especially when coupled with other obvious plot devices such as ‘the team have had their phones confiscated’ and ‘there’s something disturbing not far from the entrance, but obviously we’re not going to leave immediately like any rational human would.’ There’s some great world-building and a few original twists here, but for me this veered towards the predictable. The relationship between Elias and Ana felt oddly underdeveloped, and the ending wasn’t entirely satisfying.

The final story in this issue is “Carriers,” by James Sallis, in which a doctor named Anton is working in a war-ravaged world, doing the best he can with extremely limited resources. We follow him, witness him patching people up and learn about the tragedy that befell his brother, Saul. In the second part, Anton begins talking to a character named Ghost, who appears to be an actual ghost, and another simply named Doc. I have to confess, I found this very bleak and rather confusing. The language is lovely but the piece doesn’t appear to have a solid arc, and I wasn’t sure what I was meant to take away from it.