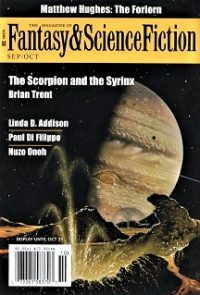 “The Abomination” by Nuzo Onoh

“The Scorpion and the Syrinx” by Brian Trent

“The Forlorn” by Matthew Hughed

“The Haunted Hills Community and Country Club” by Lincoln Michel

“To the Honorable and Esteemed Monsters under My Bed” by E.A. Bourland

“Split the Baby” by Carl Taylor

“And in Rain, Blank Pages” by Lora Gray

“Her Dragon” by Amal Singh

This year’s September/October issue of Fantasy & Science Fiction offers ten new pieces: a novella, two novelettes, and seven short stories. They span the gulf between hard SF and light fantasy, and between gritty darkness and comedy. Something for everyone.

Set in an African village, Nuzo Onoh’s “The Abomination” is a fantasy horror story. It alternates between first person narration by the protagonist’s sister in past tense, and close third in present tense. The first-person parts are narrated by the title-character’s sister, a teen whose polygamous village raised her to fear herself a spinster before most readers would be out of high school. The close third part of the story follows the titular Abomination—a hermaphrodite hated and harassed by her village, whose other residents, including her sister the narrator, regard her as a curse inflicted upon them. The innocent Abomination’s back-story leaves her so alone, so marginalized, so powerless, and so despised that it might by itself suffice for a horror vignette. But this is not a short story; it’s a novella exceeding 20,000 words. And horror is built from anticipation: the reader watches without fast-forward while the title character lives as a teen raised by a demented widow who usually forgets the protagonist is her adopted daughter, but instead mistakes her for one of her deceased children; we witness her dismay when she feels she must play the gender role that matches the dead-child’s name by which the widow calls her—sometimes a boy and sometimes a girl—grating within while she pretends to be someone she isn’t, unwilling to hurt the widow. We see her lured by a vengeful ghost into planting the seeds of her village’s destruction, and must watch while she observes, oblivious, her community turning on her. If horror isn’t your thing, and long build-ups don’t let you feel a story’s movement enough to stay with it, “The Abomination” may not be for you. But how do you make horror without building the anticipation? “The Abomination” builds numerous reasons for the protagonist to be disappointed—if so mild a word can be employed—by her supersititious, patriarchial, intolerant community that damns her as an unnatural freak even as her beauty inspires lust and jealousy among her supposed social betters, who dig deep to find new ways to betray her for their own ends. If this conduct offends you, rejoice: it’s a role-reversal revenge plot. Yet, it’s still horror: there’s no assurance that as the wheels turn and fortunes change, those ascendant at the story’s close will keep their grip on their positions. Readers who like to see a protagonist resolve a story problem in a character-defining climactic choice should be aware the story, like many horror stories, features a main character who is driven by external forces rather than controlling the action through conscious choices. (Control over one’s life works against the helplessness integral to the horror genre, so this isn’t uncommon in horror.) In this way the story recalls fairy tales in which virtuous characters are saved from their awful circumstances by an external supernatural force, receiving their just deserts as a gift or reward rather than being made to save themselves.

Brian Trent’s “The Scorpion and the Srinx” presents a fantasy set in a world in which Roman expansion reached the Americas. Historic facts like locals from occupied lands joining and advancing in Rome’s legions combine with alternate history to provide a Central American native armored as a Roman commander employing a Greek detective to solve a magical murder. Fans of alternate history will love the cultural mashups supported by the novel setting. Trent concludes “The Scorpion and the Srinx” with a delightful climactic disaster: when the detective solves the case the reader is left with some real work over the question which characters are good and evil and which are heroes and villains.

Matthew Hughes sets his detective story “The Forlorn” in a secondary fantasy world near a desert that bears the story’s name. Set on the trail of a missing apprentice, the investigator Cascor bribes and fights his way to his quarry where, naturally, things turn out to be very different than he or his employer expect. When Cascor finds the apprentice, his control over the story slips away: the forces at work about him end up shaping the denouement, which has the feel of an origin story. Readers with a background in roleplaying games will be entertained by spell names built from proper nouns and grandiloquent vocabulary into a send-up of Dungeons and Dragons (e.g., Gannimack’s Rapid Somnolence and Trethewn’s Irresistable Ram recall names like Bigby’s Interposing Hand and Tenser’s Floating Disc), and the cosmology seems to recall game rules. Entertaining. The main character appears in other stories, and familiarity with them may benefit the reader.

Lincoln Michel’s comic urban fantasy “The Haunted Hills Community and Country Club” opens on a job interview: a brokerage needs the right agent to sell homes so haunted their prior neighbors paid to have them transported elsewhere—to a community with nothing but hellishly haunted houses. Ingrid gets the job—and a haunting by her own mother, who won’t stop giving her pedestrian advice about retirement contributions and criticism about her need to wear a sweater. The high-concept farce would have been fine without complication, but it’s a horror comedy and it turns out the urban part of the urban fantasy supports more horrible horror than the fantasy portions. Light fun, then delightfully dark.

Erin Barbeau’s science fiction short “Ice Fishing on Europa” is a delight. I don’t know why it helps to travel to a distant inhospitable world and become stranded without food or medicine to find humanity, but work like this is why science fiction exists. “Ice Fishing on Europa” opens on a space-suited human alone on the ice near a tiny research station, staring into the stars and imagining vanishing into the stellar void until jerked by alarms back to work. The inhospitable nature of the workplace becomes clear: the research station is overdue for resupply, the protagonist is out of antidepressants, and the offsite officers responsible for the project appear to be as concerned about worker welfare as a mine owner who’s decided the place to save money this quarter is the safety budget. It’s easy to buy the protagonist’s fury, helplessness before the botched resupply, and sense of betrayal—not only by employers who knew what medicine means to the protagonist’s mental health and how its absence inevitably leads to daily anguish, but by a society so unaccepting back home on Earth that it seemed sensible to fly to a distant planet’s inhospitable moon just to stop feeling alienated for refusing to fit in, all the better to stare at the stars wishing to disappear. Barbeau really lays out the human condition. The story’s magic—okay, it’s not magic-magic, this is science fiction—is that despite all this the protagonist is not alone. And it’s beautiful. Highly recommended.

In about a thousand words, Octavia Cade’s fantasy flash fiction “Seedling” retells Hansel and Gretel in a forest rather hungrier than the original. Darkly entertaining.

E.A. Bourland’s “To the Honorable and Esteemed Monsters under My Bed” is a comic fantasy formed from purple prose that recalls—or lampoons—classic fantasy or perhaps the eighteenth-century epistolary works it more closely resembles. This is so glorious a comedy that mere words fail—or would fail in a more just world, so we could say words failed, which would sound impressive, wouldn’t it? Bourland’s short story takes the form of a series of letters between (a) an almost-eight-year-old boy whose stupendous command of English is surely a key factor in his success entreating the monsters beneath his bed to parley and (b) the monsters. The letters disclose a battle of wits and an SF comedy coming-of-age story. Find and read this.

In “Split the Baby” Carl Taylor presents a short dark science fiction tale inspired in part no doubt by observations made in his professional capacity as a lawyer in a position to see parents treat their children poorly while litigating a divorce. Taylor’s SF world feels dark enough to accept as normal the behavior that made Blade Runner and Soylent Green famous, and seems to have adopted the kind of resource rationing advocated in The Moon is a Harsh Mistress. Against this backdrop, a sweet young boy discovers something is amiss: his ever-fighting parents have finally agreed what they should do with him. It’s a dark realization. “Split the Baby” delivers a classic SF climax in which an outmatched protagonist must use his wits and the rules to defeat an overwhelming foe to survive. Well done.

Lora Gray opens the dark weird fantasy “And in Rain, Blank Pages” on a narrator fleeing a bad relationship without socks or an umbrella in a rain. A new relationship with Felix, who cannot speak but can make words appear on surfaces he touches, looks promising, but like Tony he’s controlling: I don’t want to have to hurt you isn’t really the kind of foundation you want to build on. The real romance is the narrator’s rediscovery of poetry, of words lost trying to make peace with controlling and ultimately bullying romantic interests. Gray depicts as victory not new love, but freedom: being in touch with yourself, being free to make your art your way.

Amal Singh’s fantasy “Her Dragon” opens on young Misha’s decision to make a dragon. The family business, it seems, is Making mythic beasts. “Her Dragon” follows Misha as she takes up the mantle of Maker and starts deciding what’s worth actually Making. Singh’s story does not depict a protagonist resisting a villain’s evil scheme, but the internal journey of a young woman deciding how to be herself in a world full of examples that are all other people. It may not provide edge-of-the-seat excitement but it is heart warming.