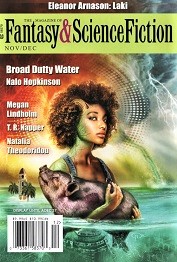 “A Dime” by Megan Lindholm

“What Makes You Forget” by Victor Pseftakis

“The Reckoning” by Alexander Glass

“Lajos and His Bees” by K.A. Teryna (translated by Alex Shvartsman)

This issue of Fantasy & Science Fiction contains 1 novella, 4 novelettes and 6 short stories. It’s a mixed bag quality-wise, but there should be something here for every reader.

“Broad Dutty Water: A Sunken Story” by Nalo Hopkinson is a new SF novelette by the Damon Knight Memorial Grand Master Award winner. In a future characterised by dramatically higher sea levels and sunken cities, a young woman is flying back from the mainland to her floating village in the Caribbean, when her ‘ultralight’ craft runs into trouble in a storm. Unfortunately, little in this SF story convinces. From the inaccurate height of storm clouds, to the girl’s complete inattention to danger, to the nature of the pool she finds within an atoll, there are simply too many descriptions here that don’t ring true or make good sense. These niggles are compounded by a more important problem: any dramatic tension the author tries to impart results from the protagonist’s errors, yet she has no positive influence on her situation. She is the one major character in the story, and she has no agency. The prose itself gains some richness from the use of Caribbean dialogue, but the weight of invented, unexplained terminology is ultimately over-bearing, and the story requires some attention and patience throughout. Overall, it’s not an especially strong start to the issue.

“A Dime” by Megan Lindholm is a sombre little story, which captures rather well the nostalgia those of us of a certain age may have for public payphones. A women rings home each year from the same old payphone she used when she was a poor student. It’s quite affecting, and as a non-genre tale, it’s fine. It should perhaps be noted for the benefit of science fiction and fantasy fans that the tale sits in neither genre, however, as the story has no speculative elements. Lindholm is well-known to many fantasy readers by her pseudonym, Robin Hobb.

“What Makes You Forget” by Victor Pseftakis is a rather forgettable short story. In a dystopian future (or perhaps fantasy world) most adults seem to live a life of poor drudgery, working in a local mine. The protagonist, Marta, seeks solace by making wishes at a ‘Hole’, located close to the mine. The nature of the hole is never explained, though the locals believe it will grant miracles; one only needs to spit in it and make the wish. Marta has two children—one good and hardworking, and one lazy and rebellious—and a violent drunken partner. She attempts to improve her situation by working evenings as a violinist at a cabaret, and casting wishes at the hole. The story fails to fully engage the reader for two key reasons. Firstly, Marta is quite an unappealing character and generates little sympathy; indeed, she seems incapable of having a thought that doesn’t involve profanity, and she presents few redeeming characteristics. Secondly, there is no development of the world in which the story is set, providing no context for the aims and disappointments of the cast of characters. With regard to the writing itself, too many metaphors and similes don’t work (such as, pride like a wound filled with pus), resulting in scenes that fail to deliver the intended impact.

“A Vast Silence” by T. R. Napper is a distinct improvement over the previous stories. With the style and impact of a hardboiled noir crime story, this was quite gripping and evocative. A petty criminal on the run in Australia takes a ride share with a student from Melbourne across the desolate Nullabor Plain. They are pulled over by a police cruiser, at which point their situation becomes life and death for reasons that only become apparent over time, but which are linked to the voice in the protagonist’s head. Despite quite spare descriptions of the outback and the principal characters, a clear mental picture of the scenario is developed, and the SF elements are well handled. Pacing is very good, and the story’s location and the ideas on show are interesting and engaging. This is a superior novelette and should be enjoyed by most readers.

“The Reckoning” by Alexander Glass features Christopher ‘Kit’ Marlowe, the Elizabethan playwright, who is being hunted in London, just before his famed and mysterious death at the hands of government agents. Here he meets up with his friend William Shakespeare, and the two discuss the danger to Marlowe’s life and his possible future. But this is a science-fantasy, and Will has a secret to tell that may help Marlowe, if he can believe him. It’s a jaunty and appealing tale, based on a background of real historical events. There have been many conspiracy theories over the years concerned with the lives and final days of both Shakespeare and Marlowe, and this science-fiction tale exploits and extends such speculations in an interesting way. An enjoyable read.

“Castella” by Graham Edwards is a fantasy novelette that tells the tale of a ‘chanter’ who wakes a castle from long slumber to do her bidding. The wakened castle can think, converse, and change shape, and it grinds its way across the world at the chanter’s request. Mobile castles and cities are not new in fantasy and science fiction of course, though they’re a concept that requires considerable suspension of disbelief. While fantasy is a genre that allows for any imaginative premise or occurrence, I couldn’t shake the misgiving that the concept in this story was just too daft, and I’m not sure it really worked well.

“Laki” by Eleanor Arneson is an enjoyable fantasy novelette set in late 18th century Iceland during the famous Laki volcanic eruption that occurred at that time. A family is forced to leave their sheep farm in southern Iceland to escape the eruption’s poisonous air and ash, and they are aided in this by their weather-wise ewe, “One-Eye.” On their journey they encounter trolls—a common feature of Icelandic mythology—presenting a fantastical and rich tale of adventure. The story is presented as a contemporary translation of the story recorded by the daughter of the farmer. The approach is a clever one, as it combines the immediacy of the girl’s narration with the historical perspective of the modern-day translator, which together manage to imbue the story with the sense of a genuine Icelandic myth. The simple and direct style of the ‘translated’ prose reads well, and further adds to the acceptance of truth in the tale, despite its fantastic nature. Highly recommended.

“Mad Milk” by Natalia Theodoridou was hard work. A long fantasy novella set in what seems like ancient lands, reminiscent of ancient Greek states, the story revolves around the invasion of the desert-like Minorea by a force from Epyrotea. The leader of the Epyroteans, Semandra, is an enigmatic lesbian with a predilection for murder and violent sex. Her ‘lover’ and the story’s narrator, Phyllida, tags along for reasons unclear. The milk referred to in the title is a drug (perhaps opium) which is used by warriors in battle, but at the expense of their minds. As characters, neither women ever come to life nor ground the story, perhaps because the reader is given little cause to care what happens to them. The story is told in a style that may split readers; no description is clearly given where metaphor, hyperbole or oddly chosen adjectives could be shoe-horned into the prose. One might overlook these stylistic quirks if the story was more engaging, but it was rather lacking in both interest and verisimilitude, making it hard to recommend.

“Lajos and His Bees” by K.A. Teryna is a quirky short fantasy, written in the style of a traditional myth or fable, and is translated here from the Russian by Alex Shvartsman. The tale centres on a mysterious ‘whisperer’, who lives close to a country village, sometime in the past. A silent man who communes with nature, the whisperer lives a hermit-like existence and attracts swarms of bees, from which he makes honey. His standing in the area is one of wary acceptance, as he makes the best honey in the land, and leaves trinkets with the townsfolk as fair trade for essentials he takes in return. It’s an imaginative tale and includes some quite arresting imagery. The fable style of presentation works quite well, except for the few occasions when the author breaks from this style and speaks directly to the reader in a chatty fashion. Apart from these interruptions in narration, the story works quite well and may well appeal.

“The Black Dog Gone Gray” by Hayley Stone is a sweet little fantasy story that recounts the help and instruction given by a werewolf to a little girl whose parents discover she has the same affliction. It’s a pleasant enough tale. One can interpret the story as exploring the need for compassionate, understanding teachers and caregivers, especially for those who are different. The narrative perspective is second-person (‘you’ do this, ‘you’ do that), which is always a risk as it’s less intimate than first-person, while not allowing the broader view of third-person. It seems unnecessary here and detracts slightly from the story, though it’s perhaps a minor complaint.

“A Demon’s Christmas Carol” by Jennie Goloboy is another sweet little fantasy story. A teenage girl and her younger brother are being mistreated by their awful foster mother and summon a demon to help them. The demon takes human form and agrees to look after them, as he wants to get away from hell. But the demon’s motivations are twofold: he not only wishes to escape hell, he’s also nostalgic for a past he spent on Earth back in the 19th century. The story is short and light but it’s well written and manages to weave quite an engaging little plot (though the conclusion is a bit too tidy) and it’s moderately humorous.

More of Mike Bickerdike’s reviews and thoughts on science-fiction can be found at:  https://starfarersf.nicepage.io/