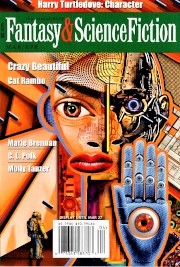 “The Music of the Siphorophenes” by C. L. Polk

“The Bletted Woman” by Rebecca Campbell

“Our Peaceful Morning” by Nick Wolven

“In the Garden of Ibn Ghazi” by Molly Tanzer

“Minstrel Boy Howling at the Moon” by Morris Allen

“Speak to the Moon” by Marie Brennan

“The Pizza Boy” by Meg Elison

This issue of Fantasy & Science Fiction contains 4 novelets and 7 short stories, several of which were really quite good and only a few that didn’t appeal at all. Overall, this issue—the first by new editor, Sheree Renée Thomas—was an enjoyable read, containing an eclectic mix of science fiction and fantasy.

In “Crazy Beautiful,” researchers have designed and built an AI computer that can both appreciate and create art. Upon its realization that art should be free (in a literal sense) it releases art, allowing it to take on form and movement: in the sky in the form of “skywhales,” and on the ground where it hunts down its former owners. The story is told as a series of connected passages that skip back and forth in time, from police interviews, to blog articles and affidavits. The underlying idea has some originality, but the structure of the story is purposefully disjointed and rather difficult to follow. Consequently, the chosen style overshadows the plot to its detriment. Overall, this story didn’t appeal.

“The Music of the Siphorophenes” by C. L. Polk

This is an enjoyable science fiction adventure, set in the outer reaches of our solar system. Featuring pirates and huge space creatures (the titular siphorophenes), this reads like a ‘golden age’ plot, brought up to date for the modern age. A starship excursion pilot agrees to take a celebrity singer out beyond Uranus to look for the rare siphorophenes. Things do not go smoothly for the couple; upon reaching their destination, they rapidly fall foul of pirates and their predicament is skilfully and energetically conveyed. The protagonists must make choices about where they stand regarding their own safety and the protection of the creatures. In so doing, they confront truths about themselves and gain increased self-awareness. This is a well-written and well-paced story, with appealing characters, though the plot is perhaps not the most original. My only other gripe would be that the use of invented pronouns for the siphorophenes trips up the flow of the prose.

“The Bletted Woman” by Rebecca Campbell

From this tale I learnt that bletting is the term for the partial decay of fruit, such as is applied to persimmon and medlar, necessary to obtain a sweet natural product. In this powerful and successful science fiction short story, the protagonist Judith is diagnosed with dementia, but then offered a way out of her deterioration by taking part in an experiment that might help save the decaying world. She grabs the opportunity as it accords closely with her “Gospel of Decay”—her ideas that decay and bletting are not necessarily negative but can lead to a new positive state. The tale is beautifully written, with pathos, and there is originality in Campbell’s ideas. In the concept of mycorrhizal communication, I was reminded of Star Trek: Discovery, funnily enough, though this story finds a more human-based use for the idea of fungal interconnectivity. For me, this was the strongest story in the magazine.

“Mannikin” by Madeleine E. Robins is a fantasy tale, in which a mother tries to protect her baby boy (Bijan) from his potential future death in war, by disguising him as a girl (Bire). The mother receives aid in this deception from a witch, who casts a spell that physically switches the child’s gender. When she’s eighteen, Bire’s village is attacked and she is called upon to repel the invading force or negotiate peace with them. Her apparent and true gender are both important to the outcome. This tale relates quite an engaging idea and is ultimately satisfying. While it might sound like a story predominantly concerned with gender politics, it doesn’t read as political; gender-switching is used here as a successful plot device, and the story should have broad appeal. That said, it is narrated by a distant third person, and reads like a re-telling of an historical tale. For this reason, it takes a little while to engage the reader, lacking the dialogue and closer perspective that would more quickly draw the reader in. A decent story, with minor reservations.

“Our Peaceful Morning” by Nick Wolven

“Our Peaceful Morning” is a surreal and comedic modern-day fantasy, in which animals (including the narrator’s pet cat Hieronymous) have been given a treatment that makes them intelligent and self-aware. Unsatisfied with simply being tickled and lorded over by humans, the animal’s revolt, led by Hieronymous. It is a light story, written to be humorous, but it was too silly to carry much depth or interest for me and it rather fizzled out at the end.

“In the Garden of Ibn Ghazi” by Molly Tanzer

Molly Tanzer has written several stories previously in the “Cthulhu” mythos, and this is, obliquely, another such story. The narrator can clearly recall reading an old Lovecraftian tale with the title “In the Garden of Ibn Ghazi,” but her research suggests no such story actually exists. However, she is contacted by a wealthy thespian, after she blogs on the topic, to say he has the only existing book of the old tale and is putting on the story as a play; he invites her to his opulent Ouroboros-shaped house in the woods to meet the cast and see the play first-hand in rehearsal. Tanzer’s story offers quite an original plot and scores additional marks for keeping the reader guessing. The protagonist is also likeable, and we sympathise with her incredulity as the tale unfolds to quite a satisfying conclusion. The main negative for me was actually in the prose, which was mostly fine for the present-day scenes (though occasionally clunky), but which was anachronistic in those sections that recounted old texts, such as an eighteenth-century travelogue. These sections would have benefited from an appropriate change in style.

“Minstrel Boy Howling at the Moon” by B. Morris Allen

This is a short fantasy story set in Oklahoma, featuring a young man with a dead-end job who finds it hard to escape from the small town he lives in. He plays the harmonica to pass the time and masters the art of over-bending notes—an act which appears to initiate strange events and appearance of wild animals. It’s not clear if the fantasy in the story is associated with genuine native American myths, but it didn’t seem to be so. I found the tale to be somewhat insubstantial, and there isn’t much to the story to make it stand out.

“Speak to the Moon” by Marie Brennan

Marie Brennan has woven an engaging tale in “Speak to the Moon.” The story starts by recounting the first Japanese manned-mission to the Moon and so begins as ‘hard’ science-fiction. But Brennan messes with our expectations, moving into science-fantasy territory when the astronaut Kemuriyama removes his helmet and suit on the Moon’s surface, and walks away from the lander, providing some memorable and original imagery; it becomes increasingly ‘fantastic’ in the second half of the tale, in which Kemuriyama’s nature and his quest on the Moon is revealed. To say much more would spoil the plot—readers will enjoy discovering what is going on for themselves. Science-fantasy is a sub-genre that is difficult to pull off very successfully, perhaps, and the author has done well to keep a foot in both science-fiction and fantasy camps without losing the reader. Overall, quite a satisfying and original story.

“Jack-in-the-Box” by Robin Furth is really a non-genre piece, which might qualify as weird fiction, but there are no truly fantastical events—only a few hints toward fantasy, perhaps. That said, it is quite an entertaining tale. A reporter visits the stately home of an aristocratic surgical pioneer, just after World War II, shortly after he has died. She is shown the gallery of the late surgeon by his son-in-law, which contains many preserved human remains. It becomes clear the surgeon conducted many experimental surgical operations—with enthusiasm rather than sober concern—including some conducted on his own son. The six-year-old grandson of the deceased knows secrets concerning his grandfather, and his grandfather’s morbid fascinations, and seems keen to share these secrets with the visiting journalist. The story is successful at building tension. On a less positive note, the son-in-law of the surgeon is a stereotypical and rather lazily drawn caricature of English aristocracy. Additionally, the fact that the stately home is built on ancient religious grounds is rather a cliché. These negatives subtract from any originality in the story, though these issues may not concern everyone. It is likely to appeal to horror and weird fiction fans with its morbid theme.

The narrating character in Turtledove’s short story is self-aware—that is, he knows he’s the character of the story. He complains about rapid scene changes (they are disorientating) and informs the reader how he feels about his actions in the story (about which he has no choice). It’s certainly a fun idea, and I’m sure Turtledove enjoyed writing this. In the story, the author re-uses the character “Ronin Benkei” from Peter S. Beagle’s 1986 novel The Folk of the Air to tell a short story of samurai in feudal Japan. The self-aware character joins up with the brother of the new Shogun, who wishes his brother were ‘out of the way’. It’s an unusual narrative concept, and quite original to me; through the character’s direct commentary and asides to the reader, Turtledove essentially writes an homage to Beagle, for whom he clearly has huge respect as a writer. It’s amusing and internally consistent despite the unusual narrative strategy and I enjoyed it.

“The Pizza Boy” by Meg Elison

This is a solid science fiction short story. In a future ravaged by an ongoing interstellar war between factions of human belligerents, a pizza boy makes deliveries from his ship to medical transport ships, troop transports and marine battleships. He makes his own pizza from scarce ingredients, sourced across many worlds, to a recipe handed down from father to son. But he must be careful, as planetfall is not allowed for non-combatants, even to gather rare mushrooms. Whether the pizzas have mushrooms or not is central to the plot. I very much enjoyed this tale—the importance of quality, tradition and self-sufficiency comes across well and the tale is engrossing. There is some depth here that elevates it above a simple tale about pizza delivery, and I felt it was one of the stronger stories in this issue of F&SF.