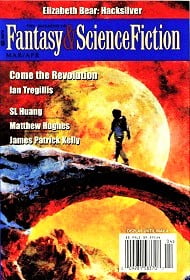 “The Million-Mile Sniper” by SL Huang

“The Last Legend” by Matthew Hughes

“Come the Revolution” by Ian Tregillis

“Red Sword of the Celiac” by John Possidente

“A Feast of Butterflies” by Amanda Hollander

“Hungry is the Earth” by William Ledbetter

“Death on the Nefertem Express” by Brian Trent

“The Man I Love” by James Patrick Kelly

The March/April issue of F&SF has twelve first publication stories, including four novelettes and one novella. As befits such a storied publication, this issue had many worthwhile tales to read.

Kiki is born with the dark moon mark on her head in this fantasy novelette set in Nigeria. It’s the mark of Onidiri and denotes her as belonging to him. She grows up in a poor village helping her mother fix the hair for the villagers. This too is a mark of Onidiri’s work and Kiki soon shows her skill at weaving cornrows in people’s hair.

But when her father dies, her mother wants to die too and take her daughter with her to the grave. Kiki runs away and soon finds herself in Lagos, where some strangers see Onidiri’s mark and take her in.

This was a slow-moving tale; though it provided an interesting view of life in a very different culture.

“The Million-Mile Sniper” by SL Huang

This short SF story is set in the future and describes a crime where the assassin fires a rock at a shuttle that won’t reach the same spot as the rock for a month. No one would have even suspected the attack was anything except an accident until a smart detective worked it out.

Now the sniper has gone into hiding, and only conspiracy theories remain on who the million-mile sniper is.

Barely longer than a flash story, the plot was interesting, but didn’t add much to the science fiction genre.

“The Last Legend” by Matthew Hughes

Ardal’s uncle indentures him to the town’s fuller in this fantasy novelette. A big boy bullies the young Ardal until he fights back and runs away, taking with him the ancient storybook his mother had read to him as a young child.

Paired with a stranger he met on the road, Ardal travels through the forest until he finds a land where all life has died. In the center of this land of the dead, he finds a cave and a strange hermit; a blind old man bound by magic to not remember yesterday, though this same magic provides all his other needs.

The only thing that gives the hermit pleasure is when Ardal reads from his storybook about the old heroes of the land. But reading seems to also bring gradual change to the surroundings.

The plot was interesting, though the prose seemed unpolished.

“Come the Revolution” by Ian Tregillis

Mab has just become self-aware in this alternate history SF novella set in 17th century Holland. She is a product of the Guild of Clockmakers, a powerful guild created by the descendants of Huygens. The Clockmakers employ an art that is diligently kept secret from all foreigners.

Like all the other mechanical beings she is controlled by a geas, a mechanism that causes great pain if she fails to obey any command, or deviate from any of her pre-programmed directives.

At first her task is to help keep the seawater from the lowlands, but after two decades she is re-assigned to the estate of a super rich family. Here she learns the secret language of the mechanical people and becomes the devotee of an especially old mechanical man who commands the respect of all the other robots on the estate.

The Dutch family has a son who grows up with all the protection and privilege of the super rich. And in time the boy’s mean streak poses a problem for all the mechanical people and even for the Guild itself.

This plot explored many interesting aspects. Slow at first, the pace picked up toward the end. And the mystery of how it would end kept it entertaining.

“Red Sword of the Celiac” by John Possidente

This short SF tale describes a plot for a 1960’s style pulp fiction story about a monster called the Celiac, that cannot help itself from eating every human it finds.

The story protagonist is asked to review the long-lost draft of the final installment of a dead author’s trilogy. The story is so bad it’s good, pulling the reviewer into feeling sympathy for the devil.

This was a curious short story that was just a tad over flash fiction length. The prose was okay, and the plot held the reader’s attention.

This short fantasy is set in New York City where Bellamy starts working as a senior architect. His father had been a drunkard with a mean streak, but now wants time to make up; Bellamy isn’t interested.

A strange ‘thing’ is happening around the city, people are getting injured when they apologize. Bellamy gives it no mind until he loses his front teeth after telling his girlfriend he is sorry for hitting her accidentally.

Days later his father stops by to try and make amends.

This was one of those well-structured and quirky stories. It pulled in the reader through its characters and mystery over what was happening.

Hartmann’s short SF story is set in a future shortly after a revolution to overthrow the machinist culture of today. The new leaders seek a way to reclaim the earth and a more harmonious culture. Against this new reality the Foundation wants to launch a colony ship on a four-hundred-year trip to a distant terraformed planet.

Lili, a sociophysicist, is hired to develop a culture that can survive fourteen generations on a spaceship, even as the government scrutinizes the Foundation and its motives. Lili is caught in the middle, as she works endlessly to find the perfect cultural blueprint that doesn’t devolve into cannibalism inside four generations.

The story was easy to read and engaged the reader in its intrigues as two people from different cultures came to see each other’s perspective.

“A Feast of Butterflies” by Amanda Hollander

The constable has a difficult problem in this short and engaging fantasy. The judge’s miscreant grandson has gone missing with three other boys and the judge wants the constable to arrest the crazy girl living on the mountainside.

After trekking up to the next village, he finds the locals don’t like the mad girl either. After all, she eats the colorful butterflies, crunching them between her teeth and licking their antennas off her lips with a sweep of her tongue. But the constable senses there is much more to the stories of abuse and violence at the hands of the wayward boys.

This was a mysterious story that let the readers work things out for themselves. There are many ways to interpret what happened, but all of them made for an engaging plot.

“Hungry is the Earth” by William Ledbetter

This SF short is set in the future, a few years after a strange alien invasion of plants. Isabella is struggling to keep her ten-year-old brother fed after the alien berry plants have wiped out most of Earth’s plant life.

The plants germinate and mature in a week, killing any plant life near them. Now Earth is covered with them and a strange docile alien life spends its time eating them. Isabella notices that the alien plants are adapting to Earth-life so they don’t kill humans. Can she use this to keep her and her brother alive?

This was an interesting and new take on alien invasion, and one that was a page-turner as well.

Bear’s fantasy novelette follows the trials of a Viking marauder returning home to find his father’s farm in a stranger’s hands. Hacksilver discovers that his brother committed a grievous crime and now owes a blood debt that the family farm only partially pays. To help complete the debt owed, the town takes everything of value from Hacksilver, including his horse.

Exiled in autumn and facing death by exposure, Hacksilver makes for the fell and the land where the giant lives. He has his magic, though it was more an influencer of the fates than true magic. Can he find the giant and a way to survive?

The plot had a steady pace that was a little ponderous at times. But the mysteries and elegant prose kept the story interesting.

“Death on the Nefertem Express” by Brian Trent

Jolene is riding a train that’s circumnavigating Nefertem in this whodunit SF novelette. Nefertem orbits a blue giant and people can only survive on the nightside, so the train must race ahead of the dawn or it’s super-rich passengers will be boiled away.

But when the train grinds to a stop thirty minutes before the sunrise, panic quickly settles on the passengers and crew. Someone on the train has sabotaged the engine. But who, why, and how will they avoid death with the others? Jolene, the erstwhile space pirate, sifts through the clues to find out.

This was a story that engaged the reader from the start, a nicely crafted mystery with a twisty end.

“The Man I Love” by James Patrick Kelly

A barman runs the Happy Valley tavern in this short fantasy. He only opens on Mondays from six to midnight, and each week a young woman in a green cloth coat comes and plays the same tune, “The Man I Love,” on the jukebox and sits in a booth to wait.

The other patrons wander in, never certain where they’ve come from or why they’re there. The barman doesn’t care and serves his patrons; he knows that in time they all move on, never to return. But this night is different. Tonight, the young lady in green has a visitor.

This morsel of a story was entertaining and easy to read. A wonderful distraction for a few minutes.