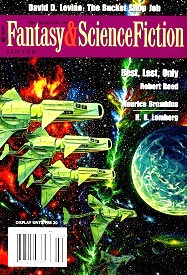 “A Creation of Birds” by Teegan Moore

“To Give Moon Milk to a Lover” by Madalena Daleziou

“Off the Map” by Dane Kuttler

“Persephone’s Children” by C. B. Channell

“Best, Last, Only” by Robert Reed

F&SF‘s January/February issue has ten first-publication stories, including one novella, three novelettes, and one flash story. This issue had many worthwhile tales to read as befits such a storied publication.

Few people notice the high school graduate in this short fantasy. That’s because his father was a ghost who his mother met in a deserted mining town in the desert. It hurts when people act as if he wasn’t there. So he goes to find the ghost town to see if he can find his father. Maybe he can learn something useful.

When he does find the old mining town, he finds his father full of ghostly stories while surrounded by supernatural friends. His ghost father is pleased to see him but isn’t forthcoming about the time with his mother. Still, it helps him adjust to being part ghost.

This easy-to-read story zipped along, holding the reader’s interest.

“A Creation of Birds” by Teegan Moore

This fantasy novelette takes place in the afterlife. Rose has just landed on the other side of the river that separates the living from the afterlife. Here she meets her secret, Hoopoe, that looks a little like a black raven. She is met by Osprey, with her own secret in the form of an unrecognizable black-feathered bird.

Rose has no idea what they expect of her, though Osprey seems put off when Rose is ‘called’ back by a memory of a time before, when she was sad. She tries to stop the calls, but they get more intense, and Osprey is angrier that Rose can’t stop them.

Rose reaches a crisis when she stumbles on a dead secret lying in an alley. She goes in search of the murderer. It must be important, but she can’t say why. Osprey, plus other wondering souls, try to help, but ultimately, it’s up to Rose to find the solution.

This meandering story was hard to read and harder to enjoy.

Draupadi captains a spaceship seeking the Library in this SF novelette. Intra-galactic travel depends on the Engine, which is powered by stories. The caveat is the story must be original. But the galaxy’s writers are locked in writer’s block. So news of a mysterious library with a million original books galvanizes the Empire into sending a motley crew of five to find it and its three centuries of fuel for the Engine.

Draupadi must lead this sundry mix of people to the galaxy’s edge. Each crew member has their agenda, many of which don’t match the Empire’s interests. Despite a few hazards, the ship arrives at a strange double planet with a wooden cabin. How could this building contain a million books? Draupadi decides to ask the ever-friendly librarian.

By the end, the story was interesting. But the noteworthy premise was marred by wallowing the first two-thirds in extensive introspection.

For Ghana, Astra Black is pioneering a luna colony in this short SF story. As expected, the major space programs don’t respect Ghana’s space program, which allows them to move ahead by leap-frogging over current technology and know-how.

Astra sees the colony as a way to extend her homeland’s culture and build symbiotic relationships with other African countries needing a boost from the post-colonial days.

The author styled the story as short entries in a log. The entries were cold, like a lecture, though the tale partially redeemed itself with insights into a different culture.

“To Give Moon Milk to a Lover” by Madalena Daleziou

Io spends her childhood cutting out paper moons in this short fantasy while her grandmother sews stars on silk quilts for Io’s dowry.

But as Io grows into a young woman, she has many possible loves, but none she really likes. Her godmother tells her about the moon’s milk that will bind a lover to her. So, Io becomes her godmother’s apprentice to learn how to milk the moon. However, Io has a different use for the moon’s milk.

The author told a curious and engaging story, though the prose dragged sometimes.

The author sets this SF novelette on Titan, which is being mined for its various resources, methane being but one. Kane is a down-on-his-luck bouncer recruited by a group of con artists. He is to supply the muscle with a deadly machine gun during the con. He is meant to scare off the marks, so they leave behind the valuable contraband.

After some hard years as an enforcer for bad people, Kane is impressed with the smooth camaraderie of the grifters. His job seems simple, burst into the room as the swindlers make the deal and shoot up the con artists with blanks. In the melee, one of the team members will switch the mark’s case.

Kane does his part, crashing into the room to attack the tricksters, claiming revenge for a bad deal. But the switching of the cases goes wrong, and the marks escape with their valuables. Kane must act quickly to save the con.

This story was a smash-’em-up action story that was entertaining to read.

In this flash fantasy, they are invited to visit the Oracle in the ruins. This same Oracle foretold the Moor invasion of Spain, though her listeners didn’t follow her advice then. Now they walk among the ruins, steeped in this history. But they can’t reveal what they hear from the Oracle.

This was only a paragraph long and felt like it was halfway between a poem and a story.

“Off the Map” by Dane Kuttler

Kuttler sets this short SF tale in a future where the changing climate has made places like Miami uninhabitable. The government has become intolerant of the slightest lapse in parenting, removing children left unattended for more than a minute. Ava has fallen afoul of the law, and the single parent lost custody of her three children because she left them in a park while she crossed the street to buy some milk.

Then a fancy corporation offers her a chance to restart her life with her children. She must leave New York, but the corporation pays for the relocation and sets her up in a new pink home in southern Florida. The community is self-contained with a school. Everything is too perfect to be true. And then a hurricane hits.

This easy-to-read mystery kept the reader engaged until the unexpected ending.

“Persephone’s Children” by C. B. Channell

Melinoe accompanies her mother, Persephone, on a trip out of Hades in this short fantasy set in the world of the Greek gods. They visit Dionysus, Melinoe’s half-brother, who is also her uncle.

However, Dionysus has ulterior motives for the invitation and begins to trigger his trap on Melinoe. Given ‘special’ wine to drink, can the daughter discern the snare before it’s sprung?

This tale was a quick addition to an old Greek myth.

“Best, Last, Only” by Robert Reed

The Great Ship is circumnavigating the Milky Way in this epic SF novella. Containing thousands of square miles, the spaceship includes many sentient beings from the galaxy, including humans. One race, the Best, resembles Earth’s extinct pterodactyls. They named themselves the Best because they were the best flyers, the strongest people, and the most beautiful. The beings on the craft are immortal, with bioceramic brains.

Keen is an undersized boy born of a Best leader. Quee Lee is a human woman, married to her eternal love Perri. Over thousands of years, Quee Lee and Keen become friends, as much as such a thing is possible when they may not see each other for centuries. At one point, the Best leave the ship to colonize a planet. But Keen stays behind, now the last of his race on the ship and a recluse.

When the Great Ship passes through the Ink Blot nebula, a space monster attacks and effectively divides the ship into two parts with an impassable seal. Still, life goes on for the surviving immortals.

The author’s sprawling story was slow at times, engrossing at others. It was an odyssey-like adventure, except now, most of the danger came from within the ship.

You can follow Kevin P Hallett’s writing on www.kevinphallett.com. There are links there to join his mailing list for a weekly newsletter on the recent release of his second novel, The Fifth Kingdom.