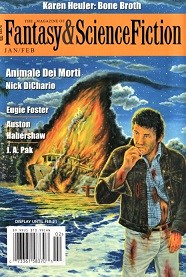 “The City and the Thing Beneath It” by Innocent Chizaram Ilo

“There Won’t be Questions” by Joe Baumann

“The Gentle Dragon Tells His Tale of Love” by J. A. Pak

F&SF‘s January/February issue has twelve first publication stories, including four novelettes and one novella. As befits such a storied publication, this issue had many worthwhile tales to read.

The fifth-level technician, Mouria, is a famous creator of artificial characters in this SF novella. The aristocrats use her characters and those of other technicians to create complex games. And after years of successfully creating champions, Mouria has fallen on lean times and is regularly humiliated by her arrogant adversary, Truene.

One day, the aristocrats summon her to meet them. They have noted her intelligence and feel they can elevate her to an aristocrat if she can pass one test. They want her to compete as an aristocrat against Truene. The winner becomes a permanent aristocrat, and the loser gets their mind wiped of all its memories.

How can she resist the chance to best her thorniest adversary? And so the game begins. But despite his arrogance, Truene is also a wily opponent, and things quickly become complex.

The story became bogged down in the details at first, but finally, the author released the storytelling, and it became an interesting read though the ending felt unrealistic.

This short SF takes place on a remote space station orbiting a black hole. Morra and Calcul are the only inhabitants until Calcul uses a mysterious knife to cut himself in half to become Cal and Cul. They are opposite and the same, the weave and the weft.

Morra, who once had one lover, now has two. But what of the knife and Cul’s hope that Morra will use it on herself to create two opposing forms of herself. Morra is unsure and must find a way to remain whole.

It was a strange tale written with a confusing beginning. In the end, the story seemed like a small boat cast adrift and tossed about on a sea of prose.

Marco’s wedding will be cursed in this fantasy novelette unless Marco can bring his big brother back from the recent dead. Tradition requires his brother to be his best man, and the only solution is to pay the village witch’s price to reanimate Franco, who died last night in a knife fight.

But the witch’s sneaky price is difficult to pay, and things go wrong quickly as Franco messes up the wedding reception and goes after the man who killed him. It isn’t long before Marco returns to the witch for more help. But knowing how devious she is, the price will not be easy to pay.

This story was a variation on an over-used plot without adding much to the fantasy genre.

Her extra thumb was amputated in this SF novelette when she was a child. She still hides her left hand to conceal the scar and frustration that they took it without her consent.

As an adult, she is a waitress in lower Manhatten. The cafe owner, Bill, has many properties that he demolishes for new development. One day she sees Bill’s construction crew unearthing a massive tooth from under a garage. Bill tells her to keep it a secret to avoid scientists snooping around.

Bill pays little attention to her until the day his dog reacts when it sniffs her scarred hand. Slowly he confides in her and reveals the secrets of his construction excavations, and she becomes more interested in things she never paid much mind to before.

This was a curious story where the human elements, mystery, and prose kept the reader engaged until the end.

Roxie is an AI in this SF novelette when the authorities sentence her to operate a prison colony on a remote planet. Her directive is to make the prison as efficient and safe as possible, and she enthusiastically begins her tasks.

This is the first time she interacts with humans and finds her creators slow and predominantly stupid. Still, she devises several schemes to reduce injuries or improve productivity. But all her requests are denied by the prison’s warden, who reminds her that the authorities are punishing her too.

Stymied at every turn, Roxie eventually does what she never thought she’d do. Reach out to a prisoner for advice.

The author paced the story well, making it a pleasure to read. And the premise of the story was a refreshingly new take on an AI to human drama.

The author sets this short fantasy/horror story with people who go out on each full Moon. They dig up and eat the worms at fresh graves, which allows them to take on the persona of the deceased.

On Dom’s first worm moon, he overindulges and becomes locked in the dead man’s persona. The new feelings pull him away from his clan, forcing him to try and live in the world of normal people. Worse, he finds himself in love with the wife of the man he now emulates.

This was an intriguing vision of people who could live on the outskirts of humanity, like vampires.

In this short SF, Trudy’s family travels to a new colony, where they discover sentient sea life that ignores the humans. The Jellies are only interested in their own proximity games.

The good news is the Jellies aren’t interested in the land, leaving the humans to terraform it as they wish. But the urge to establish contact with the Jellies distorts the colonist’s goals of non-interference. Trudy leads the fight to leave the planet altogether, but she quickly becomes an army of one.

Clark’s story is easy to read, but it resembles all the other first contact stories with little new to add to this class of stories.

In this short fantasy, Zelda’s body grows fish scales whenever she finds something she loves. The same affliction took her mother, who now lives in the sea. And Zelda’s aunt warns her to follow a strict and boring routine to avoid liking anything too much.

After two close calls where some scales infest her ankles, Zelda meets and asks her mother if finding the thing she loved was worth it. The answer plagues her as she walks away. Can she avoid falling into the same trap?

This story’s prose was light and easy to read. The mystery effortlessly pulled the reader through the story.

Mast sets this short SF in virtual reality. Jenny has anxiety issues that require her life to be regulated and free of surprises. Part of that includes finding an obscure corner of a popular VR where she can roam as a deer avatar without fear of meeting another player.

Then one day, her alert cardinal informs her that a stranger is in her forest. She flees from her game in a panic and leaves her VR pod. But she also encounters unexpected news in the real world. Can she find a way to bring much-needed stability back to her life of isolation?

This was an easy-to-read story that explored life in the future for someone with an anxiety complex.

“The City and the Thing Beneath It” by Innocent Chizaram Ilo

The setting for this short SF is Lagos, Nigeria. Shortly after the Supreme Leader completes a brutal crackdown on protesters, a mysterious object falls from the sky into Lagos Lagoon.

Many stories circulate the city while the Supreme Leader tells people it was the work of rebels to justify further brutality by his soldiers. But it is hard to suppress the hopes and fears of the people even as the thing begins its own insidious penetration of the city.

The author used many local expressions, and the story seemed more of an opportunity for an insight into Nigerian culture. So though the cultural knowledge was interesting, the story itself was less so.

“There Won’t be Questions” by Joe Baumann

High school senior Harry discovers he can recreate a living animal from its picture in this short fantasy, though the act causes intense pain for him. Still, he reluctantly agrees to rebuild pets from lost pet flyers for his friend Nigel in the hope their relationship will move past first base.

But Nigel seems to be more interested in the monetary rewards, and when he suggests Harry bring back a lost girl, Harry balks. But the idea of creating the girl gives a new idea to Harry. And after he splits up from Nigel, Harry wonders if he can complete one more living recreation.

This story has many layers, making it an interesting one to read.

“The Gentle Dragon Tells His Tale of Love” by J. A. Pak

This fantasy novelette tells the tale of Faine, a dragon who has lived for more than ten millennia. Near the end of his days, he finds Lark, a young woman. After killing her abusive husband, Lark’s harsh experiences have left her bereft of knowing what love truly is.

Like all dragons, Faine can adopt a human form, and time has little meaning for him as he woos Lark. Years pass, and both Faine and Lark learn much about the other, and yes, in time, Lark learns what it is to love someone without reservation.

However, things rarely go smoothly for decades. And so it is for Faine and Lark. Eventually, a young and pretentious dragon muscles his way onto Faine’s island in the Dragon Sea.

This character-centric story was a pleasure to read. The paragraphs flew past as the plot unwound itself, and the reader may find it ends way too soon, leaving them wishing for more.