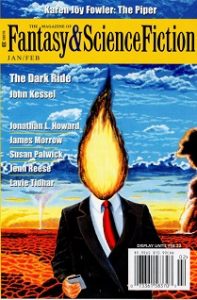 “Interludes With the Gunwright” by Jonathan L. Howard

“The Dark Ride” by John Kessel

“Bible Stories for Adults, No. 51: The Great Fish” by James Morrow

“The Piper” by Karen Joy Fowler

The January/February issue of F&SF has eleven first publication stories, including two novelettes and one novella. As befits such a storied publication, this issue had many worthwhile tales to read.

The Blessings are improving the world in this disquieting SF short story. Starting a few centuries ago, it is now apparent that magnanimous aliens have decided to help humanity over its stupid treatment of the Earth.

Because of Blessings, endangered species are safe. Polar ice caps are saved and refreezing. The weather becomes more temperate. The Blessings seem to come without an end. But not all Blessings fit with humanity’s needs. But then, should you ever look a gift horse in the mouth? And the answer comes, maybe you should!

The author found a way to bundle this intriguing future into a plot that felt as if you lived through the experiences as they came over time—nicely done.

This short fantasy is set as the Diamante family gathers around its matriarch, who is the source of their special talents. Jacinta arrives late, after previously teleporting his spirit just in case he arrived too late.

Jacinta’s favorite twin nieces greet him telepathically. But all the grownups are afraid that their special powers will disappear when their grandmother dies, and this fear hampers their ability to be with the dying woman. Yet, on the night he arrives, Jacinta’s grandmother takes him on one last journey for his soul.

An unusual tale, but the plot’s pace was slow and overburdened with details.

“Interludes With the Gunwright” by Jonathan L. Howard

A well-renowned gunwright meets a soldier of fortune in this post-apocalypse SF novelette. The soldier needs weapons to seek her fortune but lacks the funds to buy them. The gunwright offers some weapons on loan, and thus a trusting relationship is established between the two accomplished women.

Over the years, the two women cross paths several times. The soldier meets success and helps the gunwright to prosper as much as the gunwright allows. At each meeting, the gunwright learns more about the soldier’s life and the world beyond her mountain workshop.

After a lengthier period of time, the soldier returns, much the worse for wear. The gunwright doubts her ancient texts will help her heal the soldier, but still, she must try.

After a slightly confusing start, the story settled into an engaging read of two disparate women making a place in the recovering world for themselves.

“The Dark Ride” by John Kessel

Leon is determined to kill President McKinley in this fantasy novella set in Buffalo, NY during 1901. He has come to the Pan-American exposition to rid America of this President who represents all the evils of corporate greed that suppresses the poor and builds wealth from the sweat of the workers.

While Leon waits for his chance, he enters an exhibition promising a ride to the moon. He is amused by the show that follows the H. G. Wells story. Quickly, he finds himself thrown into a similar fight for the freedom of enslaved humans on the moon.

With his pistol still on him, Leon decides to help by assassinating the Grand Lunar, the moon’s despotic leader.

Its historical facts set the story’s outcome. But how the character-centric plot reaches its end was a mystery that kept the reader engaged.

Here the girl becomes Thrush, and learns the assassin’s art with a boy who hears the same music. In time, Myna, a girl in tune with healing, comes to stay. But Myna carries political baggage that can be dangerous for all the students.

The story was nicely written and a pleasure to read.

The author set this SF short in a future where an unknown power has scarred people with one ‘N’ for each time they used the N-word. When they earn the seventh ‘N’, the mysterious force metamorphosizes them into a rat. On the day it all started, America had an immediate rat problem.

Carl begins working for a black therapist. It isn’t easy finding work when you have three ‘N’s carved into your forehead. Still, he finds that even a socially responsible job is no guarantee of safety.

This was a bizarre and entertaining story that took the chance to explore a few ideas about today’s socially acceptable practices.

Teenage Noah wants to try curling in this peculiar short SF. His divorced father is all for earning some brownie points for getting his son the chance. But the ice rink is six hours away in the middle of nothing in particular.

And when they arrive, things get bizarre as an alien ship disgorges rolling aliens who originally invented the sport. Still, the father realizes his son is entirely enamored, and the alien games begin.

The over-too-quickly story had a whimsical tone to go with its original storyline.

A young girl begins collecting the sticks and stones of mental bullying in this short fantasy. As a teenager, she flees into the woods to escape her abusive stepfather. She hopes to become a witch one day.

She realizes her wishes when her collected sticks and stones transform themselves into a hut that no visitor can see. And so she lives her life blissfully unaware of the changing world. Until, one day, a small girl comes by. She is the sole survivor of a plane crash and is in enough pain to break the magic that hides the witch’s hut.

This unusual story quickly pulls the reader in but then meanders about without reaching a conclusion.

Tidhar sets this short SF in a future where people are cyborgs, and all equipment is autonomous. Efrem is a hobo on the outskirts of the Gobi with their friend Avi. They’ve heard the wild geese have been spotted deep in the desert, and they convince Avi to go and find them.

After a long journey, they ride in an autonomous van when they see a wild goose and the new city it’s building. They will be the first to enter this city, created by a relic of a past time.

This story painted an image of a strange and hard to comprehend world where humanity’s remnants have left to explore the stars, and those left behind learn to get by.

“Bible Stories for Adults, No. 51: The Great Fish” by James Morrow

Morrow’s fantasy novelette is a continuation of the biblical story about Jonah and the whale. Rebekuh, a secular Jew and a prophet, plans a lecture on her soon to be published book about God as a nothingness. But on the sea trip from New York to Florida, a mile-long whale swallows her whole.

Inside the whale’s stomach, she finds several famous prophets spending eternity. She too can be famous and spend eternity there, just so long as she changes her planned lecture to espouse the existence of God. When she refuses, the whale disgorges her onto an unknown island with three other prophets who refused to kowtow to pressure. She faces an eternity of unpublished obscurity unless she and the other prophets can end their banishment.

Though the plot was slow, it was also impressive in its bizarre approach to an old Sunday-school story.

“The Piper” by Karen Joy Fowler

The kingdom recruits an eighteen-year-old boy to go to war in this SF short. The teenager has no desire to see the world, but now he finds himself marching along the road with his friend Henry. Maybe it was his fondness for Henry that compelled him to volunteer after his friend did. Either way, he and Henry had been marching for twelve days before they reached the coast. Here the entire army finds an omen that some see as auspicious and others as discouraging.

This was a short and easy to read story, but the ending fizzled away.