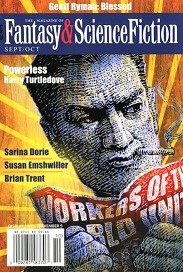 “Powerless” by Harry Turtledove
“Taste of Opal” by Yukimi Ogawa
“The Memorybox Vultures” by Brian Trent
“The Men Who Come From Flowers” by Bonnie Jo Stufflebeam
“The Gallian Revolt as Seen from the Sama-Sama Laundrobath” by Brenda Kalt
“We Mete Justice with Beak and Talon” by Jeremiah Tolbert
“Suicide Watch” by Susan Emshwiller
“Emissaries from the Skirts of Heaven” by Gregor Hartmann
“Impossible Male Pregnancy: Click to Read Full Story” by Sarina Dorie
“Blessed” by Geoff Ryman

“Shooting Iron” by Cassandra Khaw and Jonathan L. Howard turns a well-known trope inside-out when Asian Jenny Lim undergoes a mystical training experience to become a cowgirl, rather like an American boy might become a martial artist. The reader learns about Jenny Lim’s bizarre past through flashbacks as she pursues and is pursued by her arch nemesis, which naturally leads to a magic-bullet showdown.

In “Powerless” by Harry Turtledove, worker Charlie Simpkins decides he can no longer swallow the party line in socialist California. Comrade Simpkins’ small rebellions carry the disproportional threat of great personal consequence delivered by callous higher-ups. Turtledove lays out the question of one lower-class citizen’s actual power under the foot of such a harsh regime in this classic alternate-history.

“Taste of Opal” by Yukimi Ogawa opens with young Kei’s parents handing her off to traders who use her blood for profit. When Opal-blood Kei meets her opposite, Jet-blood Ko, she learns that her position is more complicated than she first assumed. Set in small villages that may or may not be in Japan, this entertaining fantasy deals with issues of balance and moral responsibility.

In “The Memorybox Vultures” by Brian Trent, Donna Lane works for posthumously uploaded personalities who continue to post to social media and conduct other affairs after their corporeal deaths. The who-done-it plot quickly turns violent, with a classic plot twist well-covered by engaging prose and the careful release of information to the reader. Readers will sympathize with Donna Lane as events cascade toward the reveal.

With “The Men Who Come From Flowers,” Bonnie Jo Stufflebeam brings us a flash piece as soft as a rose, complete with prickly thorns of uncomfortable truth. Gardener Susan raises flowers that are destined to become men, but that can only grow into men with the help of a complicated, artificial process. When she decides to keep one fledgling man, readers see the difference between a fully crafted Man and Susan’s gentle, loving creature.

In “The Gallian Revolt as Seen from the Sama-Sama Laundrobath” by Brenda Kalt, readers follow Ter Zamora as she attempts to run her business on the edge of a revolt. While she has some personal vested interest in the results, Ter must first and foremost tend to her immediate needs, including the need not to get on the wrong side of the law. Yet, Ter’s decisions do affect the revolt.

“We Mete Justice with Beak and Talon” by Jeremiah Tolbert takes readers through the air on the wings of a collective animalistic AI shared-consciousness as it hunts down a sniper drone after its assassination attempt. This surreal police chase makes for an interesting read.

“Suicide Watch” by Susan Emshwiller dives right into its own gruesome cynicism with a suicide, witnessed by our protagonist as part of a prearranged, paid service. As we witness more suicide deals we catch hints that something is wrong with these arrangements (besides the obvious). Then when our protagonist seeks more thrill than he can afford, he comes to an unorthodox solution to undercut his dealers. Emshwiller gives us a graphic example of human depravity bending technological advancements to reprehensible ends.

Gregor Hartmann crafts “Emissaries from the Skirts of Heaven” as episodic windows into Grace’s life, and thus the reader is privileged to watch her rise out of domestic abuse and poverty to become a moral person of some import. Grace not only strives to follow The Pathway, but also to help others around her see fellow followers as allies, not enemies. Implications for real-world situations abound, though Hartmann is careful to suffuse his prose with just enough other-worldly detail to avoid pointing fingers. Grace’s varied life experiences simultaneously build her up and give readers the sense that she represents many of us, from soldier to scholar.

Sarina Dorie brings us excellent moral relevancy with a touch of humor in her story, “Impossible Male Pregnancy: Click to Read Full Story.” When Javier discovers he is pregnant after he and his wife’s struggles with infertility, he experiences some of the expected conundrums such as the threat to his (Latin-American) masculinity, along with the less expected issues that flesh out the story and character development. Readers who are familiar with debates surrounding abortion may find several key passages poignant. Dorie simply is not afraid to take off the kid gloves, somehow coherently containing a number of issues in the same story.

“Blessed” by Geoff Ryman scolds us in second person point of view for being a white South African woman with no sense of self and no sense of direction. When “you” get lost on a tour, your only hope of redemption is a circumstance that would be impossible in real life.