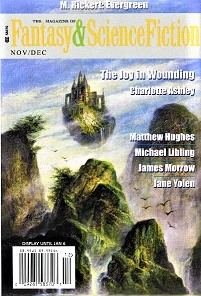 “How I Came to Write Fantasy” by Michael Libling

“Rejoice, My Brothers and Sisters” by Benjamin Rosenbaum
“The Joy in Wounding” by Charlotte Ashley
“A Geas of the Purple School” by Matthew Hughes
“Evergreen” by M. Rickert
“A Hand at The Service of Darkness” by Gregor Hartmann
“Bird Thou Never Wert” by James Morrow
“It Never Snows in Snowtown” by Rebecca Zahabi
“Knit Three, Save Four” by Marie Vibbert
“The Vicious World of Birds” by Andy Stewart
“Shucked” by Sam J. Miller

“How I Came to Write Fantasy” by Michael Libling starts out the latest issue of Fantasy and Science Fiction with a tale of long-lost love. The narrator becomes friends with his coworker Jacob, who claims to be over 400 years old. Jacob spins a tale about a witch in 15th century Netherlands, who, in response for his attempt to save her life, is granted a wish—a spell that will allow him to be with his lover, Adrie, always. But the casting of the spell is interrupted and things start to go wrong. The story’s strength is its complexity and surprises, and the discussion of how love changes over time.

Benjamin Rosenbaum‘s “Rejoice, My Brothers and Sisters” shows Sparrow, who turns out to be an observer sent into an area of people walled off by the government and who have developed their own religion to deal with coping with their world. With a sarcastic AI Amre, Sparrow begins to be changed by the people he meets. An interesting concept, but I wasn’t engaged in the story and it seemed to follow too familiar lines.

“The Joy in Wounding” by Charlotte Ashley follows the adventures of a group of Greek demigods when Melantho goes looking for her sister Fteroto. The quest takes her to an island, where Fteroto has married a goatherd. But their appearance and the passions it raises leads to trouble. Another story that I found difficult to get drawn into. The characters didn’t really hold my interest.

“A Geas of the Purple School” by Matthew Hughes is a mystery set in a fantasy world. Baldemar and his superior Vunt are required to find out why a member of the court has been murdered when returning from what seems to be a routine mission, especially since the death might have something to do with the succession to the throne. It opens a well-conceived and different sort of series of challenges. The story is sure-footed, driven by ideas that avoid clichés. I found the ending a bit too convenient, but otherwise this is a fine read.

M. Rickert “Evergreen” is basically a Christmas ghost story, where the protagonist sees many ghosts in a Christmas tree lot. It is a moody piece, bringing up memories for the protagonist, and a message about life. Not my cup of tea.

“A Hand at The Service of Darkness” by Gregor Hartmann features Philippa Strong, a detective with the Stability Police on Zephyr, who is teamed up with a member of the secret police in order to assassinate a terrorist, a job that Philippa is not keen on doing. They track him to the slum area of Shelltown, where, disguised as pilgrims, they find him in a shrine. The result is an action story about how Philippa manages to complete her mission. Decent story all around, though the method of the resolution has been done several times before.

“Bird Thou Never Wert” by James Morrow is in the form of a letter from Marsha Waszynski, about her refusal to edit a Library-of-America-like anthology of the works of fantasy great Darko Cromdahl. She tells of their history, meeting in a Greenwich Village writers group and becoming lovers. Cromdahl is unsuccessful, until a necromancer, Dr. Kalioghast, offers him a way to success via the feathers of a magical eagle. There is, of course, a catch, and Cromdahl begins to ignore the terms of the agreement. This is a familiar story made fresh and new by the strength of the writing. Morrow is a great fabulist, and the story shows him at the top of his form.

The protagonist of Rebecca Zahabi‘s “It Never Snows in Snowtown” is a long-time resident who decides to act like a tourist and see the sights. But she sees as graffiti the phrase of the title, which becomes a bit of a mystery, as her guide insists that and other phrases aren’t there. They come across protesters demonstrating against the snow and begin to realize that something is wrong. OK situation, but not very satisfying.

“Knit Three, Save Four” by Marie Vibbert was inspired by a challenge and she rises to it marvelously. Mouth has stowed away aboard a ship, killing the time in transit by knitting. She is discovered and should be sent out the airlock, only there’s a problem: the ship cannot land due a weakness in the hull, and no one is going to rescue them. Mouth does have a solution: take a cable from the cargo hold and knit a netting to strengthen the hull. The gimmick actually become the basis for a hard SF problem story and Vibbert puts enough obstacles in the way to keep things interesting.

Andy Stewart’s “The Vicious World of Birds” has a little bit of everything. The narrator is and ornithologist and returning home for a Thanksgiving/Christmas celebration, the first since his mother died and their father remarried—far too soon, in the family’s opinion. But strange things begin to happen as the group is snowed in, and the narrator’s knowledge of birds is a key to discovering what’s going on. A good story with a lot tension, both interpersonal and with the outside force that seems to hate them. I liked the characters and the explanation worked quite well.

“Shucked” by Sam J. Miller is a strange tale where Adney and her lover Teek notice a man watching them as they vacation on a shoestring. The man approaches them and makes an offer: money enough to enjoy the vacation instead of scrimping every minute. Teek, a man who everyone thinks is beautiful, understands what the other man wants of him, is to spend an hour with the man. He understands what the man wants—or think he does—and agrees. But when he returns, he won’t talk about what happened. Adney begins to think that it might not be Teek at all. This isn’t exactly a new situation, but what makes this work is the ambiguity of what happened. There is no clear-cut answer and that helps make the story.

Chuck Rothman’s story “Her Old Man” will be appearing in the anthology Horror for the Throne.