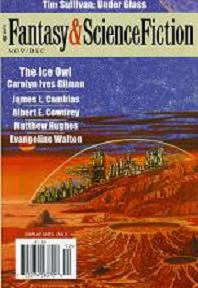 “The Klepsydra: A Chapter from A Faunary of Recondite Beings” by Michaela Roessner
“Object Three” by James L. Cambias
“Under Glass” by Tim Sullivan
“How Peter Met Pan” by Albert E. Cowdrey
“They That Have Wings” by Evangeline Walton
“Quartet and Triptych” by Matthew Hughes
“The Ice Owl” by Carolyn Ives Gilman

Fantasy & Science Fiction magazine is the big time, the real deal, the good stuff. This is one of the places where short fiction goes when it’s good. Going in with that expectation, the question them becomes: Can the November-December 2011 issue live up to those high expectations?

As always, Fantasy & Science Fiction has a nice variety of stories. This issue they’re publishing one short story, four novelettes (one of which is sort of special, but I’ll get to that later), and two novellas.

Right off the bat, this issue offers a challenging short story. Well, I say short story, but it’s really more of a slice-of-structured-life piece than a story. And, yes, it’s quite challenging, if only because it’s written as a pastiche of an academic book. “The Klepsydra: A Chapter from A Faunary of Recondite Beings,” by Michaela Roessner, goes all out in its structural similarity to a scholarly work. It even has footnotes and you have to go to the back of the story to read them, then try to find your place again to resume reading the story. So, physically challenging as well as mentally.

Roessner tells the story of a translator specializing in ancient Greek. She is absorbed in the effort to excavate the ruins of lost Alexandria and discovers the origins of the Greek word for a water clock. Despite the deliberately dry premise and format, the story really did keep my interest. It wasn’t exciting, but it was intriguing. My only real problem with it was that what happens at the end is quickly brushed over, which I thought a real waste as that was the piece that should have been expounded upon.

In space, no one can hear you scream, but that won’t stop them from smiling as they reach around and stab you in the back. It seems that even megadistances away from our home planet and megaseconds into the future, humanity still has the capability to look at a fellow human and think: prey. Well, it does if we are to believe “Object Three,” a novelette by James L. Cambias.

The story starts out as a classic heist tale, with a ragtag band of specialist thieves recruiting the odd-man out with the scientific knowledge they need to find their target. Even when two of the band are non-human, and two are human, it’s still a bit of a dog-eat-dog situation. In a far solar system, with no appreciable planets or resources, there resides an Object that violates the known laws of physics. Over thousands of years, a number of cultures have come to the system to study the Object.

Over the years, Object Two was found and there were rumors of Object Three, which has a shape that seems clearly designed to function as a key to open Object One. And if the key of Object Three is inserted into Object One, what might happen? Well, you’re not going to find out from me.
Cambias does a nice job of transplanting the noir sensibilities from the mean streets to the mean habitats of a far-flung solar system. The characters are engaging and interact quite nicely in a consistent environment. I quite liked this one, and got an obscene amount of glee as the double-crosses began to pile up. Nicely done.

What is the worth of a human soul? And, to be even more contrarian, does the human soul even exist at all? Good questions and one that the protagonist of “Under Glass” by Tim Sullivan has to struggle with following the death of his friend Bob.

Bob, you see, was a collector: comics, movie posters, birds, CD’s and, near the end of his life, began to collect human souls housed in glass jars. Our narrator is tasked by his friend Bob with being the executor of his estate, seeing the birds, CD’s and such get homes, but most especially and specifically making sure certain soul jars are given to specific people.

Of course, our skeptical narrator says, the jars are just empty vessels holding only air. Still, he thinks, What if? Would it be right to keep a soul captured in a jar? Would it be best to set it free? Should it even matter?

“Under Glass” is a nice, thought-provoking story. Although I thought the structure was a bit wonky, jumping around in time here and there, it still held together relatively well and gave a few good minutes of reading pleasure.

Thousands of years ago, the center of what would be the United States was underwater, claimed by the Inland Sea. What’s past is, apparently, prologue, at least according to “How Peter Met Pan” by Albert E. Cowdrey. Writing near-future fiction is tough work in that the author has to believably create a future that could grow from our present. That future has to feel real and Cowdrey does a nice job of that, giving the Inland Sea of the future and the wilderness surrounding it a nice feeling of reality.

The consequences of manmade global climate change don’t end at just the changing environment, but also extend to changing cultures and situations. For instance, Cowdrey posits the rise of Canada as a superpower and the collapse of the United States to third-world status. It’s an interesting backdrop against which the titular Peter goes hiking with the experienced Tim along a nature trail beside the Inland Sea to forget about a girl.

With its regression to third-world status, the United States seems to also have picked up an increase in superstition, folk tales and, possibly, an invasion of the supernatural. Pete and Tim encounter the requisite colorful locals and some, possibly, that are more dangerous than colorful. All in all, the story was a nice blend of creeping horror and well-thought-out world building.

Evangeline Walton (1907-1996) was the author of a number of fantasy novels and a winner of the World Fantasy Award for Lifetime Achievement in 1989.  Ms. Walton’s family has been going through the author’s papers and discovered a number of unpublished short stories. Lucky us, we get to read this one: “They That Have Wings.”

War, the old saying goes, makes for strange bedfellows. That’s certainly true in this short story. Set amidst the turmoil of World War II and the fall of Crete to the German military machine, the story tells the tale of Johnny, Bert and Ronnie, three soldiers wounded and on the run in the mountains. After escaping from the bombardment of the German Stuka war planes, they wander without food or drink in the snow-covered mountains.

The three are about to give up when they begin to be bothered by a strange black bird that hovers above. Surely it is only happenstance that leads them in the same direction as the bird to find a cabin inhabited by a lovely young girl and her great-grandmother. Or not.

You know, there’s a reason Walton was given the lifetime achievement award. This woman can really write. While the story has a certain Golden Age feel to it, we still get to meet some very well-drawn characters in a creepy setting and watch some interestingly bad things happen. This recently discovered gem is well worth your time.

With an environment reminiscent (in a good way) of Jack Vance’s Dying Earth series of stories, Matthew Hughes gives us a look at a far-future earth in “Quartet and Triptych,” one of two novellas in this issue.

Earth has been long forgotten, and then rediscovered, considered passé and then back into vogue, a cycle of attention that seemed to finally come to rest with the globe inhabited by examples of all and sundry of humanity, ruled over by the iron will of the Archonate. As in every society, no matter how advanced, there exist beings who make their homes between the metal walls of society, a stainless steel rat, if you will. One such rat is Luff Imbry, a thief who has taken an interest in a long-dormant estate that houses – possibly – one of the most sought-after pieces of artwork under this earth’s old orange sun.

Using technology and tactics and old-fashioned bribery, Luff engages the aid of a long-dead personality encoded in a lifemask to embark on his operation. Unfortunately, he attracts the attention of one of the Archonate’s computerized intelligences. Things become less than optimal for Imbry.

Scattering the decaying bones of lost technology throughout the story, Hughes does a passable impression of Vance. Although that impression is not all Hughes brings to the table. He gives us a nice, tight plot with engaging characters and fills it out with a breathtaking background. All in all, this is a nice piece.

Teenagers. Sheesh. They never change, not even if they’re in the future or on a different planet. No matter where and when they are, teenagers are teenagers. Which leads us to the last novella in this month’s issue, “The Ice Owl” by Carolyn Ives Gilman.

Thorn, who has just given herself that more adult name after being called Tuppence for so long, lives in the Waster section of the iron city of Glory to God. The Wasters are those who buck the mainstream, the providers of services that might be termed sin. Thorn’s mother, Maya, provides reproductive services which, in this case, happens to be helping women become pregnant without their infertile husbands knowing.

Like many teenagers, Thorn is convinced that she is the only authentic person in a city and a family of posers, people concerned only with the surface of their appearance, never the truth of who they are. When a gang of incorruptible protesters destroys her school, Thorn goes in search of a tutor to take her in and finds a bit more than she bargained for in Magister Pregaldin.

Thorn’s teacher has a deep, personal connection to an infamous atrocity that occurred on a distant planet long in the past. When a sudden change in leadership brings chaos and the possibility that Thorn and her mother must flee again, the past suddenly comes back to bite both Thorn and her teacher.

Written in a deceptively smooth style, “The Ice Owl” is a lovely story, told with adventure and verve while also wrestling with some compelling ethical issues. The mother/daughter conflict central to the story was a refreshing change of pace from seemingly endless father/son dances that seem to be about now. I enjoyed meeting Thorn and the rest of the characters surrounding her.