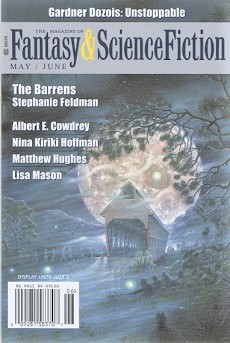 “The Barrens” by Stephanie Feldman
“Inquisitive” by Pip Coen
“Argent and Sable” by Matthew Hughes
“The Bicycle Whisperer” by Lisa Mason
“Unstoppable” by Gardner Dozois
“Crash-Site” by Brian Trent
“What You Pass For” by Melanie West
“Ku’gbo” by Dare Segum Falowo
“Behold the Child” by Albert E. Cowdrey
“The Properties of Shadow” by Nina Kiriki Hoffman

The latest issue of this venerable publication offers an even balance of science fiction and fantasy. About half of its offerings are novelettes, the rest short stories, ensuring a wide variety of imaginative literature.

The magazine begins on a high note with “Tender Loving Plastics” by Amman Sabet. The story follows a woman from infancy to young adulthood. Raised by a robot mother, she experiences the mixed feelings of any foster child. The author depicts her emotions sensitively and convincingly, avoiding sentimentality.

Much darker in tone is “The Barrens” by Stephanie Feldman. A group of high school students search for a pirate radio station transmitting from the Pine Barrens of New Jersey. They encounter a large number of supernatural menaces, based on local legends. Although vividly written, the story may seem overly familiar to fans of horror fiction.

“Inquisitive” by Pip Coen features a child without empathy. Her only goal is to acquire knowledge. She grows up to become one of the inquisitors in this future society, who obtain information through technologically advanced forms of torture. She cold-bloodedly manipulates the system until she reaches the highest level of her profession. Readers patient enough to endure such an unsympathetic character will discover an elegantly written, imaginative story with a subtle and effective ending.

One of a series of stories relating the adventures of a wizard’s assistant, “Argent and Sable” by Matthew Hughes sends the hero on a quest to obtain a pair of magic gantlets. This requires him to use all his wits to free the demon trapped by the gantlets, while protecting himself from the being’s wrath. Although the story begins with the protagonist gifted with luck during a previous encounter, this is not relevant to the plot. Overall, this is a typical tale of high fantasy.

“The Bicycle Whisperer” by Lisa Mason is set in the near future. Computer technology creates sentient bicycles. A woman sets out to find one that has run away from its owner. This brief story may be intended an allegory of an abusive relationship. If so, many will find the resolution unsatisfactory, and possibly even disturbing.

“Unstoppable” by Gardner Dozois concerns a prince obsessed with becoming the greatest warrior in the world. After murdering his way to the throne, he uses magic to become indestructible. It all leads to an ironic ending. This is an enjoyable tale, if hardly profound.

“Crash-Site” by Brian Trent takes place on a distant planet in the far future. Various characters are after a weapon recovered from a starship that crashed on the planet centuries ago. The main appeal of this science fiction adventure story is its technologically advanced setting.

Set in the 1920s or 1930s, “What You Pass For” by Melanie West involves magic white paint, which allows a man to give his fellow African-Americans the physical characteristics of Caucasians. He hates and fears his unwanted ability, and refuses to use it on himself, although this condemns him to a life of poverty. A dancer, forbidden to join a ballet company because of her race, demands the use of this power, even though she is already very light-skinned. This is a powerful story about appearances and reality.

“Ku’gbo” by Nigerian writer Dare Segun Falowo is a dense, complex fantasy with a plot difficult to summarize. Suffice to say that it takes place in an African village which is no ordinary community, and that it begins with a boy seeking to protect food from invisible rams. The many supernatural events and beings that fill the plot, and the author’s fondness for metaphors, make this a story which must be read slowly and carefully to appreciate its uniqueness.

Set in modern New Orleans, “Behold the Child” by Albert E. Cowdrey depicts an unscrupulous lawyer who uses a telekinetic little boy to kill his enemies. A rival lawyer and a private detective, both telepathic, fight to end his reign of terror. The narrative tone is often light, contrasting oddly with the story’s violence. The ending comes as an unpleasant surprise.

The final story is “The Properties of Shadow” by Nina Kiriki Hoffman. An artist collects discarded items to create her works, with the aid of an alien assistant. When an enemy disguised as a reporter attacks the artist, the alien uses its ability to detect so-called shadows to protect her. This is a moderately effective science fiction story, even if the nature of the shadows is not always clear.

Victoria Silverwolf has every issue of Fantasy and Science Fiction published in the twentieth century in special bookcases at home.