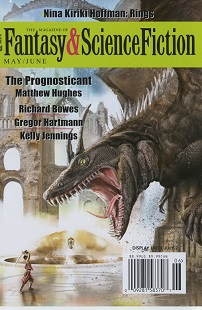 “A Thousand Deaths Through Flesh and Stone” by Brian Trent

“Witch’s Hour” by Shannon Connor Winward
“Dirty Old Town” by Richard Bowes
“The Prognosticant” by Matthew Hughes
“The History of the Invasion Told in Five Dogs” by Kelly Jennings
“What the Hands Know” by Gregor Hartmann
“The Woman with the Long Black Hair” by Zach Shepard
“My English Name” by R. S. Benedict
“The First Day of Someone Else’s Life” by John Schoffstall
“Neko Brushes” by Leah Cypess
“Rings” by Nina Kiriki Hoffman

This issue of the long-running magazine offers stories set in the past, the present, futures both near and far, and in worlds that never were. Almost every reader of speculative fiction is sure to find something appealing within its pages.

Brian Trent leads off with “A Thousand Deaths Through Flesh and Stone,” a grim tale of revenge or justice, depending on one’s point of view. Humanity has inhabited many places in the solar system. The plot begins after a final act of violence at the end of a particularly horrific war has killed nearly the entire population of Mars. The narrator is sent to assassinate a war criminal hiding on the Moon. The mission is made particularly complicated by the fact that both the hunter and the prey have had their minds uploaded into multiple bodies. What follows is a fast-paced thriller with a level of violence which some readers may find disturbing.

“Witch’s Hour” by Shannon Connor Winward shifts the scene to a medieval one. The protagonist is the head cook in a king’s castle. As a young girl she was sold by her parents to the previous cook, who taught her but also abused her. After his death, he returns as a ghost and continues to disturb her. She must use her magical skills to resist him. Meanwhile, the unmarried king takes an interest in her, which she receives with mixed feelings. This is a story with a main character who is not always sympathetic, and the point may be that the cycle of abuse is difficult to break.

Boston in the recent past and in the present day is the setting for “Dirty Old Town” by Richard Bowes. As a young boy, the narrator encounters two bullying brothers, one of whom will eventually disappear, and the other go on to become a friend. Decades later the narrator is a playwright and his friend is a successful actor. A touch of fantasy enters this tale of nostalgia and changes over time from the fact that the narrator learns a spell from his grandmother which allows him to sense what another person is experiencing. The story can be read as an allegory of empathy, and is likely to appeal to those who enjoy mainstream literary fiction with a subtle flavor of the fantastic.

“The Prognosticant” by Matthew Hughes deals with the adventures of a wizard’s henchman. In the first part, he catches an apprentice thief who is investigating the wizard’s security system, and learns some tricks of the trade. In the second part, he is sent by his master to obtain a magical helm, and faces great danger in doing so. Although not strictly a comedy, the tone is tongue-in-cheek, and the story is episodic and open-ended.

“The History of the Invasion Told in Five Dogs” by Kelly Jennings is a brief tale with a title which reveals its structure. The narrator describes five dogs he has encountered, from childhood, just before the Earth is invaded by aliens, to early adulthood, when small groups of humans struggle to survive. The emotional appeal of the story is made stronger by the fact that the narrator offers only small glimpses of the invaders.

Like the first story in this issue, “What the Hands Know” by Gregor Hartmann is a violent tale set on another world in a high-tech future, but with less deadly consequences. A journalist gets mixed up in a no-holds-barred fight in a nightclub on a distant planet when two miners challenge one of the owners of the company for which they work to combat. The author mostly seems interested in the technology of the battle armor the contestants wear, which hardens on impact, offering protection but limiting movement. This story is likely to appeal to sports fans.

The title character in “The Woman with the Long Black Hair” by Zach Shepard is not just a woman, but to reveal much more would spoil the power of this very short, poetic story. Suffice to say that she meets various people, and that strange things happen. This is a haunting tale which is sure to remain in the reader’s memory.

“My English Name” is the first published story by R. S. Benedict. It is narrated by a creature who does not understand its own nature, but who knows that it must take on the external characteristics of human beings, changing from time to time as one of its disguises wears out. Its current form is that of a British man working as a teacher of English in China, based on the author’s own experience. It develops a close relationship with a Chinese man, which can only end badly. In addition to providing an enlightening look at modern China, the author offers a thoughtful account of hiding one’s true self from others.

Identity is also a key theme in “The First Day of Someone Else’s Life” by John Schoffstall. The protagonist is a man who is not who he thinks he is, and whose memories are incomplete and distorted. The narrator is a woman’s voice inside his head who offers advice while offering only partial explanations for his condition. The reader may feel as confused as the character, as all of this takes place against a very complex futuristic background, with new concepts tossed in left and right. Eventually everything becomes clear, in a climax which may not be as original or intriguing as the beginning.

We leave the future for the past in “Neko Brushes” by Leah Cypess, set in Japan during the time of the shoguns. A young boy raised by monks loves to draw pictures of cats. A samurai discovers evidence that these images come to life. He takes the boy to the castle of an exiled noblewoman, where they plan to make use of his skills in a battle against the shogun. This is an enjoyable historical fantasy, although the ending is a bit weak.

“Rings” by Nina Kiriki Hoffman is set in the far future on a planet colonized by human beings centuries before the story begins. A culture has arisen where men are purchased as slaves by women. The relationship between mistress and slave is a complex one, and it is possible that the author is exploring the nature of marriage. In any case, the story offers a great deal of exotic detail about this society, but it ends very suddenly, almost as if it were the first chapter of a novel.