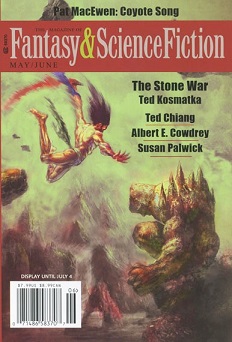 “Last of the Sharkspeakers” by Brian Trent
“The Nostalgia Calculator” by Rich Larson
“Coyote Song” by Pat MacEwen
“Caribou: Documentary Fragments” by Joseph Tomaras
“Steamboat Gothic” by Albert E. Cowdrey
“Ash” by Susan Palwick
“The Secret Mirror of Moriyama House” by Yukimi Ogawa
“The Long Fall Up” by William Ledbetter
“The Stone War” by Ted Kosmatka
“The Great Silence” by Allora & Calzadilla and Ted Chiang (reprint, not reviewed)

The May/June issue of F&SF has ten first publication stories, including one novella and five novelettes. I enjoyed reading seven of the stories and two of these I will add to the year-end recommended reading list.

Ashley’s fantasy novelette is set in eighteenth century Canada following the Canadian French revolution in a parallel universe. It’s the story of Louis-Ange, an officer in the revolution who blunders his way through various conflicts while maintaining his dedication to the revolutionary cause. Lurking outside the city are various monstrous creatures waiting their chance to consume anyone careless enough to attract their attention. When Louis-Ange accepts a suicide mission into the hinterland, we wonder if he can bungle his way through once again.

An interesting read, though I did feel it dragged in a couple of places where the author chose a more expository style. An underlying mystery kept me engaged in the story.

“Last of the Sharkspeakers” by Brian Trent

This science fiction novelette tells the story of Tacan, a mutated human in the distant future. He is the alpha of a pod that live in the semi-vacuum of a hollowed out asteroid. The ‘pure’ humans in the asteroid despise the pod members, even though the pod offers these humans a way to win the war against the Icara. In time, Tacan discovers the truth about how the ‘pure’ humans treat his people prejudicially. Then Tacan has to determine what’s best for the pod.

The story reminds me of the hard science fiction of past generations. I found the yarn engaging and enjoyed the read.

“The Nostalgia Calculator” by Rich Larson

This quick science fiction story projects a future in which the protagonist, Noel, discovers a trend in people’s reaction to nostalgic products that concerns him. Could this be the approach of an apocalypse? When he raises his concerns, the powers that be predictably beat him down. His ultimate reaction is common to what we see in many people today.

I found the story telling choppy and confusing at times with a mixture of future and present technologies. This was a story I had to work a little harder at reading.

“Coyote Song” is a fantasy novella that pitches Cambodian magic against Native American and New Orleans magic. Yutu comes from the Native American culture. She finds herself and her Mississippi boss pitted against a powerful Asian witch who directs her minions to attack them. To survive, Yutu is compelled to seek help from her ancestors’ magic, but the consequences are beyond what she or her boss bargained for.

MacEwen has written an interesting story that gradually pulls you into the web of conflicting magic. In the end, I enjoyed the read, though it seemed slow through the longer early narrative portions.

This science fiction tale portrays a near future where the military has developed new interrogation techniques that include a biological element. Jennifer, a former marine, is a guinea pig for a new selective memory erasing protein. With the military’s myopic view of safety, things do not go as planned.

Told through a series of changing POV’s, the story moves along at a good pace as Tomaras builds a picture of what happened through various eyewitnesses and experts. Some of the experts were a little on the technical side, but I found they didn’t detract from the story. The only real drawback to the author’s approach is that there is no chance to build the characters with so many first person POV’s.

A horror mystery about a Louisiana sheriff investigating the gruesome murder of a film crew. Sheriff Chew has his own agenda that blurs the lines around justice, using fake evidence to pin the crime of someone who deserved to be jailed–a Deep Southern view. However, the real criminal turns out to be someone even the sheriff didn’t imagine.

Cowdrey’s style quickly pulls the reader into the story, getting them invested in the characters and storyline. An enjoyable story to be sure.

Palwick has created a fantasy tale in which Penny discovers her tree is regenerating things lost in her house fire. This should be a great boon to her and it does bring comfort to her lonely life. In time, however, the tree begins to return some things that should remain lost.

“Ash”’s story plot is unusual and thought provoking. But the story telling was slow, relying mostly on long narrative descriptions.

“The Secret Mirror of Moriyama House” by Yukimi Ogawa

Ogawa has given us a new perspective on ‘ghosts’ in this fantasy. Moriyama uses her crochet skills to patch-up the ghosts of the recently deceased. She is getting old and needs to find someone to replace her. However, her choice as a replacement has their own needs from the after-life.

The story moved along at a steady pace and there was one point where I found myself confused for a paragraph. Over all I liked the story and saw no evidence that English is not Ogawa’s first language.

“The Long Fall Up” by William Ledbetter

Jager, the protagonist in this science fiction novelette, is under orders to intercept a pregnant woman in a spaceship. The runaway is determined to be the first to gestate and birth a child in zero gravity against the wishes of The Mountain. It quickly becomes apparent to Jager that his employers intend to use him to destroy the runaways before they can show humanity the truth about births in space. Jager decides to try to save the mother. What follows is an increasingly tense battle between Jager and The Mountain as he tries to circumvent each attempt to force the mother’s destruction.

Ledbetter spins enough intrigue and challenge in this story to keep this reader engaged. The pace was good as the spaceships and story hurtled towards their climax. An entertaining and thought provoking story to read.

“The Stone War” by Ted Kosmatka

This novelette length fantasy reveals a world where a stone man lives with total indifference to the people passing through. The one brutal truth is that he kills anyone who directly or indirectly attacks him. At first, the consequences seem unimportant and localized. Until a king determines to find a way to use the stone man as a weapon to forward his desire for conquest. However, that proves to be much more of a challenge than he imagined.

An interesting new look at what deterrent means and trying to curb our impulse to grow at the expense of others. A well-written and engaging story.