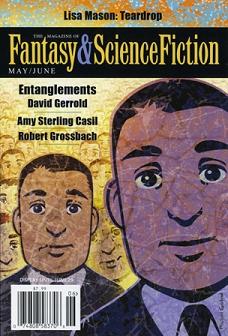 “Entrepreneurs” by Robert Grossbach
“Teardrop” by Lisa Mason
“Entanglements” by David Gerrold
“Trapping the Pleistocene” by James Sarafin
“The Laminated Man” by Albert E. Cowdrey
“Today’s Smarthouse in Love” by Sarah Pinsker
“Four Seasons in the Forest of Your Mind” by Caroline M. Yoachim
“In the Time of Love” by Amy Sterling Casil
“A Turkey with Egg on his Face” by Rob Chilson

Charles Finlay’s second issue as editor is a strong one. The powerful stories by Grossbach, Gerrold and Sarafin are alone worth the price of entry.

Robert Grossbach’s “Entrepreneurs” is the longest and best story in this issue. Stretching from 1952 into the near future, it tells of the efforts of enterprising engineer Morty Rushman to make it big in business ─ with the help of some equally enterprising aliens from the Eep planet, Narusto. Grossbach uses the theme of alien contact to make some very amusing points about modern American capitalism in the second half of the twentieth century and beyond. The humour reminded me of Kurt Vonnegut and Robert Sheckley, and there can’t be much higher praise than that.

In the novelet “Teardrop” Lisa Mason attempts some bold world-building, immersing us in the culture and climate of a planet with two-atmospheres. It is the emotional relationship between one of the natives of the planet, NanaNini, and the colonists from the Network that propels the story forward. Unfortunately, the welter of alien terms introduced into the story, together with the rather rushed ending, makes for a confusing reading experience.

“Entanglements” by David Gerrold is a very strong novelet, with playful autobiographical elements. A “quantum empathiser” provides the first person narrator, an SF writer called David Gerrold, with access to parallel universes that show how his life might have developed in different circumstances. Although written in a deceptively relaxed and rambling style, underneath it all Gerrold makes a very moving point about the roads we take and don’t take in life. There is also a surprising Author’s Afterword.

James Sarafin made me think of Cormac McCarthy and Ernest Hemingway as well as Ray Bradbury in the way he describes a trip back into prehistoric times in “Trapping the Pleistocene.” What might have been a run-of-the-mill time-travel story is made into something very out of the ordinary by vivid and evocative descriptions of hunting the wild creatures of the Pleistocene and of the solace of male companionship in a time of sadness and loss.

“The Laminated Man” by Albert E. Cowdrey is the first of two stories in this issue which hinge on the use of 3D printing. Cowdrey is a frequent and reliable contributor to F&SF but here he delivers a tired mix of Lovecraftian horror story and thriller which suffers from too much exposition and a rather perfunctory ending.

“Today’s Smarthouse in Love” by Sarah Pinsker is a short story about a future in which houses are given artificial intelligence to help make the lives of their owners run smoothly. But what if the houses start to exhibit human emotions? And so we have an amusing story of the unrequited love of one house for the house next door.

“Four Seasons in the Forest of Your Mind” by Caroline M. Yoachim is one of the shortest stories in the issue but powerfully conveys the sense of human minds being invaded by alien presences.

“In the Time of Love” by Amy Sterling Casil also features a 3D printer. Here it is used to make real a device which stops time ─ handy for Brian’s furtive affair with Daria, until his wife Cara finds out. This is a well written and bittersweet story of the war between the sexes.

Rob Chilson cites Avram Davidson as an influence on “A Turkey with Egg on his Face.” I have not read any Davidson but did enjoy this tall tale of love, murder and time travel set in the back water of St. Clair County, Missouri.