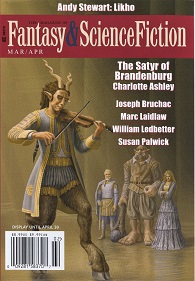 “The Satyr of Brandenburg” by Charlotte Ashley

“Deep Sea Fish” by Chi Hui (translated by Brian Bies)
“The Next to the Last of the Mohegans” by Joseph Bruchac
“Likho” by Andy Stewart
“The Beast from Below” by William Ledbetter
“Hideous Flowerpots” by Susan Palwick
“A Swim and a Crawl” by Marc Laidlaw
“A Dog of Wu” by Ted Rabinowitz
“The Harmonic Resonance of Ejiro Anaborhi” by Wole Talabi
“Down Where Sound Comes Blunt” by G. V. Anderson

This issue of the long-running magazine takes the reader all over the world, past, present, and future, with a visit to the far reaches of the solar system as a bonus.

We begin on the island of Sardinia in the year 1700 with “The Satyr of Brandenburg” by Charlotte Ashley. A professional duelist, who seems to be something other than an ordinary woman, faces supernatural beings in mock battles. A satyr whom she knows from the past has the power to take over the bodies of others, turning the duels into deadly ones. With the help of a nun turned swashbuckler, she faces her old enemy. This historical fantasy is part of a series, so some things about the characters are unexplained. It’s a light, pleasant read, but ends quickly, with a conclusion that suggests a sequel.

“Deep Sea Fish” by Chi Hui (translated by Brian Bies) takes place on Titan at a time when humanity has colonized much of the solar system. Terraforming of Saturn’s largest moon threatens to destroy ancient monuments of ice built by aliens. The protagonist, an archaeologist from Earth, accompanies a woman born on Titan when disaster strikes. The author combines a convincing description of space exploration with a wide-ranging vision of humanity’s destiny in a way that reminds me of Arthur C. Clarke.

“The Next to the Last of the Mohegans” by Joseph Bruchac combines science fiction and fantasy into a comic whole. The narrator’s eccentric friend invents an odd kind of time machine that allows him to contact little people of Native American legend. Complications ensue. This is a minor but enjoyable story.

We journey to modern Ukraine in “Likho” by Andy Stewart, a sequel to his novella “Wormwood is Also a Star.” In that story, set in the 1990s, telepathic children survived inside a certain area within the region contaminated by the Chernobyl disaster. In the sequel, which takes place after the Ukrainian revolution, a woman goes into the area, confronting both the terrors of her past and the dangers of the present. The author paints a realistic picture of the region and its politics. This makes the fantastic content of the plot believable. Readers should be aware that this story contains a great deal of violence.

“The Beast from Below” by William Ledbetter is a spoof of 1950’s science fiction movies in which radiation creates giant monsters. A sheriff faces an enormous armadillo and the huge grubs it eats. It’s a silly story, but worth a few chuckles.

The protagonist of “Hideous Flowerpots” by Susan Palwick is a woman who runs an art gallery. Frustrated by her own lack of artistic skill, she is rude and cruel to others. A group of women helps her change her ways in an odd manner involving a magical object. The author seems to realize that the story threatens to spill over into New Age sentimentality, and avoids that problem through the cynical, skeptical personality of the main character.

“A Swim and a Crawl” by Marc Laidlaw has only one character, who is never named, and no dialogue. A man swims out to sea, then back to land, where he climbs a cliff. What he discovers at the end of his journey is very strange. This story feels like a prose poem, and may be an allegory that is not entirely clear.

“A Dog of Wu” by Ted Rabinowitz takes place long after a nuclear holocaust. Many of the survivors of the disaster are clone-like people, genetically designed to serve their masters. The narrator is one such servant, sent on a mission that he does not fully understand. The author successfully creates a complex future society.

The reader travels to Nigeria in the 1990s in “The Harmonic Resonance of Ejiro Anaborhi” by Wole Talabi. A girl discovers an alien object fallen to Earth. It allows her consciousness to be in multiple places at once, as well as blending to the minds of others. With her friend, she uses it when a political protest led by her father threatens to turn violent. The setting is vivid, and the story ends on a hopeful note.

Our odyssey ends in Greenland, with “Down Where Sound Comes Blunt” by G. V. Anderson. This is a world where water-dwelling humanoids exist. A woman seeks her father, who disappeared while exploring a freshwater lake under the ice. Multiple flashbacks reveal the woman’s relationship with her father when she was a child. The author makes the aquatic creatures very convincing, but the story’s conclusion seems out of place with the rest.