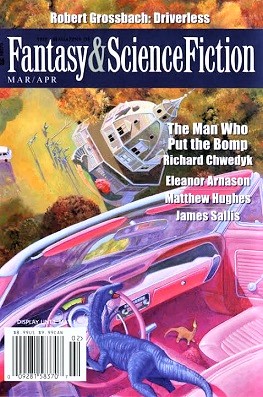 “The Toymaker’s Daughter” by Arundhati Hazra
“Ten Half-Pennies” by Matthew Hughes
“The Man Who Put the Bomp” by Richard Chwedyk
“A Green Silk Dress and a Wedding-Death” by Cat Hellisen
“Miss Cruz” by James Sallis
“The Avenger” by Albert E. Cowdrey
“Daisy” by Eleanor Arnason

This issue of Fantasy & Science Fiction has a good mixture of stories. A theme of non-human consciousness snakes through several of the pieces: two stories deal with sentient toys, one with driverless cars that have perhaps got a little too big for their tires, one with a classical river spirit and another with a book-keeping octopus. With such an eclectic mix, there’s surely something here to please everyone.

Robert Grossbach’s “Driverless” is about driverless cars; a fashionable theme in SF stories right now. The story focuses on Jacob, a man who writes software for a particular brand of artificially-intelligent taxi-cabs. Jacob, it appears, has increased his status in the “eyes” of these driverless cars, or DCs. When they start thinking for themselves, and putting their passengers at risk, it’s up to him to try and diffuse the situation. The world-building in this story is very good, and this is certainly one of the better driverless-car stories I’ve read this year (it’s February, and this is the third I’ve seen so far), but the ending falls a little flat. The author seems to recognize this, and virtually apologizes for the lack of drama at one point. Presumably it was an effort to do something unpredictable and different, but for me it didn’t quite work.

“The Toymaker’s Daughter,” by Arundhati Hazra, is a very different tale, taking us into the realm of literary fantasy. The story begins in the Himalayas where, after some rather lovely scene-setting, we meet a young girl who’s painting her father’s carved wooden animals. Nothing especially fantastical there, you might think, until the animals start talking to the children who eventually receive them. This is a slow-paced but rather lovely story, which explores themes of loss and learning to cope with grief. An enjoyable, gentle read.

“Ten Half-Pennies,” by Matthew Hughes, is a longer piece at just over seven and a half thousand words. We meet Baldemar, a young boy who is suffering at the hands of the local bullies. He turns to the local moneylender and his hired muscle, Vunt, for help, and eventually ends up working for them. The world-building here is wonderful, and I really empathized with Baldemar – the characters are beautifully and lovingly created. Unfortunately, I felt there was a bit of a third act problem. The bullying problem is resolved, and then Hughes naturally has to invent some new conflict for Baldemar and Vunt, which felt a little tacked-on after the excellent start. But overall this is an enjoyable read, and something which I could easily imagine being developed into a longer work.

“The Man Who Put the Bomp,” by Richard Chwedyk, is a novella which follows on from some earlier pieces, the first of which was published in the January 2001 issue of F&SF. One of the earlier stories in the series, “Bronte’s Egg” is a Nebula award-winner. I say all this because I have not read these earlier stories; my review is very much the opinion of a “virgin” reader. “The Man Who Put the Bomp” begins with a man, Nicholas Danner, going to visit the “saurs” – a group of genetically-engineered, sentient, tiny dinosaurs who have left (or, more often, been abandoned by) their human companions and are now living in a house in a community of their own. From there, the tale quickly switches to the point of view of the saurs, some of whom have discovered a mysterious vehicle – the VOOM – and are trying to get it working.

I have to say, I found this story hard work. It’s told from multiple points of view and there are many, many different characters, including numerous saurs. Personally, I felt that a number of them did not have particularly distinctive voices and I found it difficult to keep track of who was who. Worse, I found I didn’t particularly care. It may be that if I had read the earlier stories I would have experienced this differently, since some of the characters would have been known to me, but there are other problems. In particular, there is an important human character, Christine, whose story was not particularly satisfactorily resolved. Then there’s the VOOM which, half-way through the story, is suddenly outside of the house (with some saur passengers) with no explanation as to how or why. This is very much an SF story, not fantasy (so there’s no magic involved), and this rather felt as though the world’s “rules” had been broken – always very annoying. Again, perhaps there’s backstory which I’ve missed which would have helped to explain what was happening, but as a stand-alone piece I didn’t find this particularly enjoyable. If you’ve read and enjoyed saur stories before, though, I’m sure you’ll be pleased to see a new edition to the series.

“A Green Silk Dress and a Wedding-Death,” by Cat Hellisen, is another piece of literary fantasy, this time revolving around a river spirit. The protagonist is Héloise, a short-sighted woman who lives in poverty with her grandmother and her little brother, and who makes a living scaling and gutting fish. There seems to be no way out of her hopeless existence, until some of the local fishermen capture a river spirit and put it on display in a tank. This is a dark piece with some very adult themes; it put me in mind of old fairytales – the versions with gore and horror before Disney sanitized everything – and was rather wonderful in that respect. The ending, particularly, is reminiscent of the original The Little Mermaid. This isn’t the most uplifting piece, but it’s well worth a read.

“Miss Cruz,” by James Sallis, is very different. We meet a musician living in a “residential hotel” in Phoenix, Arizona. The eponymous Miss Cruz, it turns out, is actually a guitar – but one which our hero doesn’t actually use in his gigs. One day, sitting in a coffeehouse, he realizes he has a strange ability. The rest of the story revolves around him using, and ultimately deciding that he must not use, his power. This is an odd piece. The central idea is a good one, and not one I’ve seen explored before. But I felt the story didn’t quite come together. There’s a lot of backstory which didn’t seem especially relevant, and I couldn’t work out why the title is “Miss Cruz,” since the guitar is barely mentioned and didn’t seem particularly significant. Perhaps I missed something, but in summary I’d say this an intriguing idea at its heart, but it’s not an especially memorable story.

“The Avenger” by Albert E. Cowdrey is one of my favorites in this issue. This piece of urban fantasy centers around a character called William Warlock, who seems to be a strange mixture of private detective and hit-man. He takes on a case for Jeanne, the widow of a woman who is being victimized by her late husband’s half-brother. The story starts strongly, moves at a good pace and has a satisfactory conclusion. The characters, especially Warlock and his – for want of a better word – assistant Devi Sindra, are intriguing, and I could imagine myself picking up a “William Warlock” novel in the future. A very enjoyable read.

Finally, we come to “Daisy,” by Eleanor Arnason. This piece features a sentient, book-keeping octopus called Daisy who is, or was, “working” for a criminal gang. The protagonist is not the cephalopod however, but rather a female private eye called Olson who’s hired to find Daisy after she’s kidnapped. An accounting octopus is certainly an original idea, and this tale is well-written and enjoyable, with a satisfying ending that leaves you pondering bigger questions. On the surface it’s a straightforward detective story, but the underlying theme is really how we should deal with sentient, but non-human, beings. As such, it makes a particularly fitting end for this issue of F&SF.