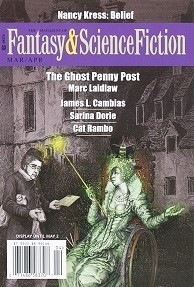 “Red In Tooth and Cog” by Cat Rambo
“Belief” by Nancy Kress
“The Liar” by John P. Murphy
“Nanabojou and the Race Question” by Justin Barbeau
“The Language of the Silent” by Juliette Wade and Sheila Finch
“Diamond” by Chris DeVito
“The Prince and the Pulpster” by Paul di Filippo
“The Silver Strands of Alpha Crucis-D” by N. J. Schrock
“A Mother’s Arms” by Sarina Dorie
“Golden Gate Blues” by James L. Cambias

F&SF lives up to its name with this issue, which is about half F (maybe a little less) and half SF (maybe a little more) with some fuzzy stories that straddle the two, along with one which features a dash of mild horror in its fantasy. Even within the subgenres, not everything is likely to appeal to everyone but something should appeal to someone and most people will probably be okay with most of it.

A mail inspector and a detective arrive together at a small town in Victorian England due to complaints about the mail service. The detective stays at the estate of a rich guy while the inspector heads into town. Then the story reveals itself to be of a shadow “magic” kingdom overlapping the ordinary reality and, well, reality is for people who can’t handle drugs and the two visitors are changed by their experience in different ways.

This is a story which prioritizes a veddy 19th century English style over plot/action and theme over realistic characterization. It did evoke a sense of weird doings and double vision. The lament of some of the more mature folks in the story, regarding the youth of that day being caught up in new-fangled and society-destroying things like written letters rather than good old spoken conversation, was amusing.

“Red In Tooth and Cog” by Cat Rambo

Renee is in a park in the near future when she lays her phone down and it gets stolen, not by a typical robber, but by a small machine. Despite this rather negative introduction, she comes to be obsessed with learning about the park’s mechanical ecosystem in which discarded household appliances with a modicum of AI begin to modify themselves, hunt other machines, and even reproduce. She faces a couple of challenges with her job performance suffering and with a relative likely to be annoyed at her for losing the heirlooms she had attached to the phone’s case. Further, the ecosystem itself is threatened by an uncaring, yet intrusive, bureaucracy. Her “Jane Goodall of the apps” abilities and the park’s robotic assistant are about all the help she has when the threat arrives.

This story is relatively long for its content and features a rather overwrought end sequence and unsurprising conclusion but the depiction of the “teeth and cogs” is quite imaginative and entertaining.

In sections named after Mosaic commandments or science-based paraphrases thereof, Andrea deals with her stalled science career and her friend’s even worse troubles while her daughter, Natalie, explores mystic ways of “knowing.” Reaching the end of the story is like running off the edge of a cliff as there’s suddenly no more story, though the non-ending is thematically apt enough.

For those who haven’t read enough Nancy Kress stories about related women, the characters depicted may resonate and for those feeling conflicts regarding their scientific or mystic ways, this may also resonate. Otherwise, not so much. I like a lot of Nancy Kress’ stories, myself, but this one wasn’t among my favorites.

“The Liar” by John P. Murphy

Greg is a “liar,” which is to say someone who can tell broken things they aren’t really broken and, if he’s convincing enough, repair them with an imposition of will alone. When the old sexton can no longer perform his duties, Greg takes over and learns about the town’s secret: every November 5th, a teenager dies. Unraveling this supernatural mystery takes him back to a crashed WWII bomber nearby and another secret. Adding urgency to this fatal problem is that Greg and Pastor Julie have a budding relationship going and Julie has a wayward teenaged daughter.

I’m not in the habit of quoting editorial blurbs but this story is described as being like “Garrison Keillor wrote a Stephen King story” and, while not expert in either, that seems to capture it very well (Lake Wobegon is even mentioned in the story.) I said “Red in Tooth and Cog” was “relatively long for its content” and the same might be said of this, but this creates interesting characters steeped in a sense of place (small-town New Hampshire) in which quite a bit does happen and, even when matters aren’t at a peak, I was content to hang out with the folks of the story. The realistic aspects are very well done, the fantasy is deftly woven in (and creative in recasting the essence of the supernatural element), and the horror adds spice.

“Nanabojou and the Race Question” by Justin Barbeau

Nanabojou is a sort of trickster-god protagonist for this anecdote/fable in which he inserts himself into a meeting regarding the Racial Integrity Act of 1924 which dealt with the classification of “whites” and “others” as part of the eugenics movement.

On a purely fictional level, this is deficient as a modern story and, on a didactic level, it is likely to be considered too intrusively preachy for those who do not wish to be preached to, yet insufficiently outraged for those who do.

“The Language of the Silent” by Juliette Wade and Sheila Finch

Ifigenia Chimalli is a “lingster” for the Guild of Xenolinguists on the planet Enikiu and is not very satisfied with her job, which she sees as too superficial, especially as she became estranged from her grandmother in her pursuit of the job, which her grandmother sees as a betrayal of her Aztec heritage (due to some bizarre illogic of treaties necessarily equating to conquest). When she receives word of her grandmother’s death and a depressurization in the ship leaves Ifigenia deaf, perhaps temporarily, she continues on to the planet anyway. She then becomes embroiled in revolutionary activity when it turns out Things Are Not As They Seem where, of course, her loss of hearing results in her gain of understanding.

There’s an odd synchronicity in the death and deafness; also, the crew seems remarkably unimpressed by their ship being holed. The protagonist spends a lot of the story being repeatedly rendered unconscious so she can have Aztec dreams which alternate with her waking activities. All the gains and losses, character motivations, social issues, and plot resolution seem executed in an almost paint-by-numbers How to Write a Socially Conscious SF Story manner. But those numbers are there because they produce saleable fiction and this one is at least aware of them and deploys them competently so, for fans of linguistics (actually a secondary/symbolic element) and stories of struggles for social justice, this may work.

A flash piece (c. 1500 words) about Jackie Robinson getting into baseball, with a twist.

This is an unduly angry piece which makes the protagonist unappealing but is clever and quick.

“The Prince and the Pulpster” by Paul di Filippo

Another flash piece (c. 2000 words), this time metafictional, regarding a Wall Street magnate who wishes to be an SF writer “buying” a writer – exchanging identities with him. It is supposed to be a one-year trial with an option to commit. Predictable but not unamusing.

“The Silver Strands of Alpha Crucis-D” by N. J. Schrock

The third consecutive piece of flash fiction (and last of this issue): a group of explorers is on Alpha Crucis-D, speculating about the nature of the silver filaments in the air. While some aspects of the phenomena are never conclusively decided (though the reader may unscientifically feel sure), a severe problem presents itself when certain incompatibilities are proved.

This is a beautiful piece of scientific prose poetry with fascinating ideas, descriptions, and chemistry (literally), and is also a great first sale. I feel one slight dissatisfaction, though, in that stories these days seem to rarely be content with “oh wow” (as in the first page or two, which I read with my eyes probably shining and my jaw agape, probably looking like a happy idiot) and usually fall for the “oh no” element of a story which is supposed to provide a sometimes unnecessary plot tension (as in the latter part of this one) though the author may have felt it thematically necessary. Either way, this is the second story of this issue that I thought was particularly enjoyable (along with “The Liar”).

“A Mother’s Arms” by Sarina Dorie

A sort of tree octopus on an alien world has had a litter of eight young which makes her pretty spiffy amongst her species until the new big shiny flying creatures which spit fire show up, fighting the old big sky predators. In the battle, her young become collateral damage. This normally results in the mother dying, her purpose being fulfilled, but not always, especially when a desire for revenge gives her a reason to live. So she drops down to the swamp and goes to attack a fallen shiny creature but stops when she discovers that that creature is probably already dead, yet had three young of its own, one of which is still alive. How she chooses to handle this and what comes of that decision form the remainder of the story.

Obviously, this is a story of humans and their flying machines arriving on a planet, doing battle with one (apparently non-sentient but dangerous) species, while the local sentients observe and one of them tells the story from her point of view. The author gets to deploy humorous subtextual devices such as the native seeing the little worm thing as a larva of the big shiny thing and, since all native larvae are female until grown otherwise, much fun is had with the fuzzy faced larva that calls itself Jonathan being seen as a little girl. Sort of takes the starch out of the heroic manly explorer of new worlds. At the same time, this story tells the tale of a species where the only purpose of females is to reproduce and raise their young (though our heroine is not bound completely by the standard role). Anyway, all that aside, this is a competent and entertaining story which manages to avoid the problem I spoke of earlier of gratuitous or excessive angst.

In an alternate Earth of superheroes, supervillains, monsters, and such, Anthony Mace is a PI, assisted by his teenaged daughter, Mila. Our story opens with his being recruited by a paroled supervillain, Dr. Kraken, to look into the case of the Giant Octopus having its head smashed. When everyone from a California state cop to a park ranger interfere with his investigation and he discovers another Giant Critter killing, he suspects Something Big Is Going On. Things begin to come to a head when a very unusual suspect is identified.

Many people may enjoy this story: it is a good example of tone or voice, as the San Bruno PI (he can’t afford San Francisco offices) tells his tale in semi-hardboiled style and part of it is quite imaginative, though neither of the two finales is exactly overwhelming in terms of their resolutions. Contrary to a previous hard SF piece by Cambias which I enjoyed a great deal, this tale seems to be part of a sub-subgenre of comic book stories and/or mashups, being strongly reminiscent of, e.g., 2014’s F&SF stories “The End of the Silk Road” (Levine), “Palm Strike’s Last Case” (Anders), and 2015’s tor.com story “The Totally Secret Origin of Foxman” (McCullough), etc., and that’s definitely not my personal cup of tea, but it apparently is some folks’.

Jason McGregor‘s space on the internet (with additional reviews) can be found here.